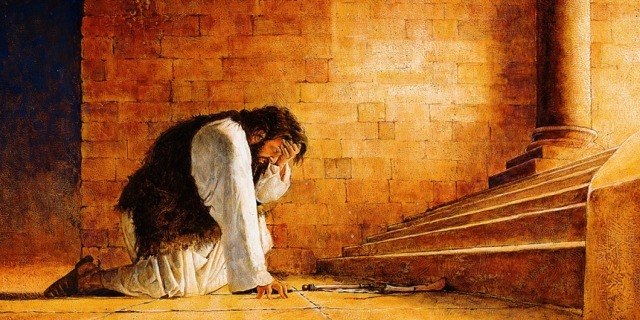 Then Hezekiah prayed to the Lord, saying: “O Lord of hosts, God of Israel, the One who dwells between the cherubim, You are God, You alone, of all the kingdoms of the earth. You have made heaven and earth. Incline Your ear, O Lord, and hear; open Your eyes, O Lord, and see; and hear all the words of Sennacherib, which he has sent to reproach the living God. Truly, Lord, the kings of Assyria have laid waste all the nations and their lands, and have cast their gods into the fire; for they were not gods, but the work of men’s hands—wood and stone. Therefore they destroyed them. Now, therefore, O Lord our God, save us from his hand, that all the kingdoms of the earth may know that You are the Lord, You alone.” (Isaiah 37:15-20)

The Assyrian army surrounded Jerusalem and the situation looked very dire. It seemed impossible for any hope against such an avenging army that had annihilated the northern tribes into oblivion and now they stood at the gates of Jerusalem. Sennacherib, king of the Assyrian Empire sent envoys to persuade the people of Jerusalem to give up and surrender. There was great fear and consternation. King Hezekiah, king of Judah, sought the advice of Isaiah the prophet who assured the king no harm would come to the city. The Assyrians sent a letter to Hezekiah warning him not to trust in his God to deliver the city because the might of the Assyrian army was more powerful than the people of Judah. Hezekiah took the letter to the temple and spread it before Lord. The king pleaded for the Lord to deliver the city.

Hezekiah’s prayer revered the name of God recognizing that only God could save the people. Referring to the Ark of the Covenant where the Lord communed with the people, Hezekiah recognized the authority of the Lord God as the one who dwelt between the cherubim. There was only one true God and He was the one who created the heavens and earth. Prayer begins with knowing that God is the only one to worship and only through His divine power would deliverance be granted. The kingdoms of the earth are at the mercy of the Lord God and that included the boasting of the Assyrians.

Prayer is seeking the favor of God upon His terms. Asking the Lord to incline His ear and open His eyes to the words of Sennacherib was seeking the will of God to be done without the favor of man. Hezekiah knew the king of Assyria was nothing more than a man much like himself. All men must know there is one true God and that only through the divine will of the one who made heaven and earth will the affairs of men be ordered. Sennacherib boasted that no one could stop him but he had not come face to face with the true God. Hezekiah sought the favor of God whom the Assyrians had brought reproach. The gods of men were dead but the God of Hezekiah was the living God.

There was no doubt the Assyrians were a devastating army and they had laid waste to many nations including the brethren of Judah and Benjamin. The northern tribes would never recover as they faded away into the dust of Israel’s history emerging as the hated Samaritans. All of the gods Israel of the north had served did not deliver them. Baal and Ashtoreth were no match for the army of the Assyrians because they were nothing more than the work of men’s hands – wood and stone. The Assyrians defeated all the gods of the wicked northern tribes because they were useless and powerless. What Sennacherib would soon discover is the God of Judah was not like the gods of their brethren.

Hezekiah pleaded with the Lord to show His power against the Assyrians. The king said, “O Lord our God.” It was personal with the king. He knew the value of prayer was the relationship he had with the Lord and through his pleadings God would deliver them. Hezekiah believed the Lord God of Israel was greater than the immense army surrounding Jerusalem and that as hopeless as the situation seemed, God was greater. Pleading with God to deliver them, the king recognized that all the earth would come to know the one true God. That night, the angel of the Lord came to the camp of the Assyrians and killed one hundred and eighty-five thousand men of war. The Assyrian army was broken. Sennacherib returned home and was murdered by two of his sons. The God of Judah was unlike the gods of Israel.

Hezekiah’s prayer is a lesson on how the people of God face overwhelming pandemics, economic distress, a crisis of health, and the many challenges of life. Possessing a deep belief in the authority of God over the heavens and earth will bring the soul of God’s people to spread their worries and fears before His throne. Asking the blessings of the Lord and seeking His intervention is the power of prayer. Hezekiah asked the Lord to hear and for the Lord to open His eyes to see. Prayer is asking and seeking the favor of the only true God. The greatest blessing of prayer is the privilege of God’s children to beseech the blessings of the Father and He will answer. Sometimes the challenges of life will seem impossible but with prayer and faith in the only true God, the impossible can be done. Let the earth know that God is the Lord. Tell the world there is only one true God. Let the light of Christ shine bright in this time of concern. God is greater than a virus. He still rules. Praise God.