Where Is Their God? 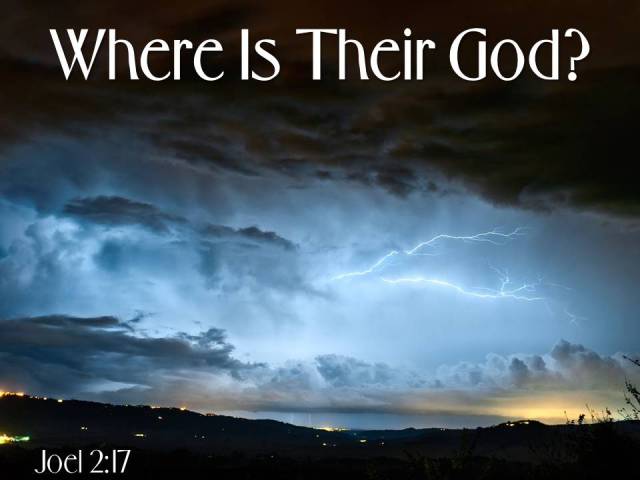 Let the priests, who minister to the Lord, weep between the porch and the altar; let them say, “Spare Your people, O Lord, and do not give Your heritage to reproach, that the nations should rule over them. Why should they say among the peoples, ‘Where is their God?’” (Joel 2:17)

Where Is Their God

The nation of Israel was the most powerful of all the nations of the world in their zenith. Called the apple of His eye, the Lord looked over His people with great care and providential protection to bless them with all the storehouses of His heavenly glory. No one could stand before the might of the army of Israel as the power of God gave them victories over all their enemies. The nations surrounding Israel feared the God of the Hebrews for centuries because of the stories of how the people had defied Egypt and the army of Pharaoh. Long before the nation arrived in Canaan, the fear of Israel had spread among the people of Jericho and surrounding cities as told by Rahab, the harlot. Throughout the rise of Israel, God’s power was seen as the might and force of wrath upon those who opposed this nation. When Solomon solidified the nation as one great body of the chosen people of the Lord God, no nation would dare raise their hand against them. Following the death of Solomon, the united nation of Israel fell into civil unrest and divided among the tribes as evil kings used their power to lead the people into the practice of idolatry and immorality. For the northern ten tribes, there would never be an escape. God’s wrath would utterly destroy them under the might of the Assyrians. The remaining two tribes of Judah and Benjamin would remain for many years after the fall of Samaria but would find themselves under the yoke of the Babylonian masters in 586 B.C. Prophets like Joel pleaded with the people to turn back to the Lord and seek the mercy of a benevolent God but the people refused. When the Temple of Solomon was destroyed the world knew the God of Israel had forsaken His own people to the might of the Babylonians.

The real tragedy of the destruction of the Temple and the defeat of Israel was the image left upon the hearts of the nations around them. Wars were fought among peoples based upon the power of their gods. One nation would oppose another nation as a conflict between the gods of the attacking army and the gods of the defending army. When victory was gained, the conclusion was the victorious army’s god was greater than any other. When Assyria and Babylon defeated Israel it was a victory in the minds of the pagan kings of their god being more powerful than the God of Israel. When the Babylonians entered the Temple of Solomon and walked into the Holy of Holies unharmed it was a clear message to the nation of Israel that God had forsaken them to the whims of the pagan Gentiles. The prophets had repeatedly told the people the Lord would allow this to happen if they did not repent. What the Assyrians and Babylonians did not know is that Jehovah God allowed them to destroy His people and the Lord kept a remnant alive as He had promised through the Babylonian captivity. The greatest shame the rebellious people of Israel did was to bring reproach against the name of the one true God, Jehovah, Lord and Creator of all things. The invading armies would ask, “Where is their God?” when they were slaughtering the people of Israel. Because of the willful rebellion of the people, the name of God was being blasphemed among the nations. Jehovah was being ridiculed for lacking power. The Babylonians believed their gods were greater than the God of Israel. They were mistaken of course because the power of God allowed them to take Israel captive but the message was clear. The people of God abandoned their faith and the people of the world saw no glory in their God.

Jesus Christ came to earth and gave His life to create in His body, the church, a people that would glorify, honor, praise and worship the Father. The power of God has been promised to all His people who believe in Him and fill their lives with His beauty, wisdom, and grace. One of the greatest dangers to the church is the insincere lives of His people who deny the power of God in their daily walk allowing the world to question why they would serve a God who has abandoned them. What the world does not know or appreciate is that God has not failed the child but the child has turned away from the Father. The life of too many Christians leaves the impression on others that God is not real, He does not save and He does not care about them. Looking at the lives of many saints, this would be the only conclusion. Why would anyone want to become a Christian and live such a miserable existence as those who proclaim to be children of God and have no joy? The world asks, “Where is their God?” The nations around Israel wanted to see how powerful God was in the lives of the Israelites and found nothing. What does the world see in the hearts of those who profess Jesus Christ? When the heart is void and empty of God’s grace the world will see the same void and deny God. The Lord must be working and active in the hearts of His people so the world can see the power of God changing lives. Unchanged lives declare God is dead. The trumpet of repentance must be heralded in the hearts of the church to be alive in Christ and serve the Lord God with devotion and love so the people of the world can know how God changes lives. Where is God in your life?