It’s Not In There 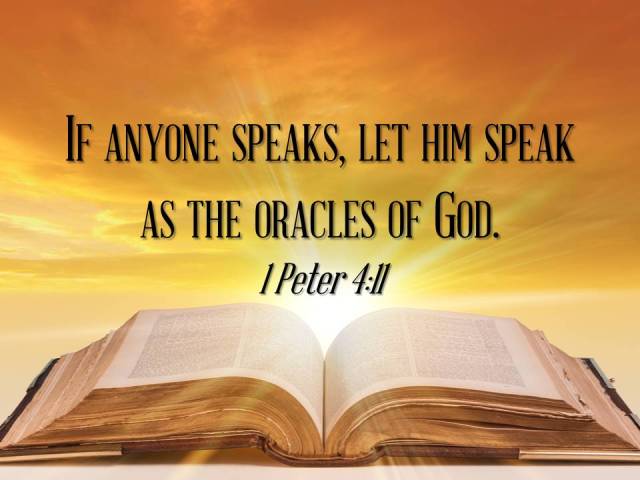 If anyone speaks, let him speak as the oracles of God. If anyone ministers, let him do it as with the ability which God supplies, that in all things God may be glorified through Jesus Christ, to whom belong the glory and the dominion forever and ever. Amen. (1 Peter 4:11)

It’s Not In There

In 1984, the fast-food chain Wendy’s introduced one of the cleverest slogans in the history of marketing. The phrase “where’s the beef” became a national sensation as Wendy’s challenged other hamburger institutions in the tough market of fast-food franchises. Clara Peller became the face of the ad and the phrase became a catchphrase questioning the substance of products, ideals, and even politics. The idea was simple: prove what is claimed. This slogan sold a lot of hamburgers but the application of its principle will determine the eternal destiny of followers of God.

The Bible is the mind of God revealed to man so that he can know the will of the Father. Through the revelation of the written word, everyone can read and understand the will of God. There are no exceptions as the Bible was written in a language that any man can know what the Lord expects and demands for salvation. The commandments of the Lord are not burdensome. There is nothing required of a man that he cannot do. God is a merciful, just, and benevolent Creator who affords His creation every opportunity to come to the knowledge of the truth. When a person fails to follow the word of God and declares he does not understand, the prejudice lies in his own heart and not the word of God. The idea is simple: prove what is claimed.

There are many things people believe and practice that is not found in the Bible. This does not suggest a misinterpretation or misunderstanding of the text. The fact remains that many of the teachings that men hold as truth are not found written on the pages of God’s word. When the church first began, Satan knew he had to find a way to destroy what God had created. He brought persecution against the disciples but that made them stronger. The Holy Spirit said that in latter times some would depart from the faith, giving heed to deceiving spirits and doctrines of demons. Spanning two thousand years it can be seen how much the religious world has gone off track in teaching what God said and what men say. There are more things accepted today that are not found in the Bible that many people accept as true than ever before.

The following religious teachings are not found in the Bible and honest hearts must admit they are not found in the Bible. Peter says that disciples must speak where the Bible speaks. The oracles of God are easy to understand. Where in the Bible does it mention Extreme Unction, the Pope, Penance, Rosary beads, Indulgences, Transubstantiation, sprinkling or pouring for baptism, or worship of Mary, mother of Jesus? Christmas is never found in scripture. Luke never celebrated Easter. No example of New Testament disciples using instruments of music in worship can be found. The following religious bodies are never named by the New Testament writers: The Roman Catholic Church, Lutheran Church, Episcopal Church, Methodist Church, Presbyterian Church, the Baptist Church, or Mormons. Faith only is found once in the book of James but only in the context that salvation is not by faith only. Purgatory is not found in the Bible. In the words of Clara Peller: Where’s the beef?

Numerous times throughout scripture God warns of those who would add or take away from His book. If most religious people would take the time to find what they believe in the Bible they would realize that many things held as truth today never resided within the pages of God’s book. False teachings can be found abundantly in the writings of men. This is only the first level of examining truth but it is a beginning point. There are many doctrines taught in churches today that are perversions of God’s truth. Satan has done a splendid job in deceiving the hearts of men to believe in God but to accept the truth of God in light of man’s wisdom. Salvation does come to a man because he calls on the Lord. Truth is narrow and eternal life is found by those who do the will of the Father.