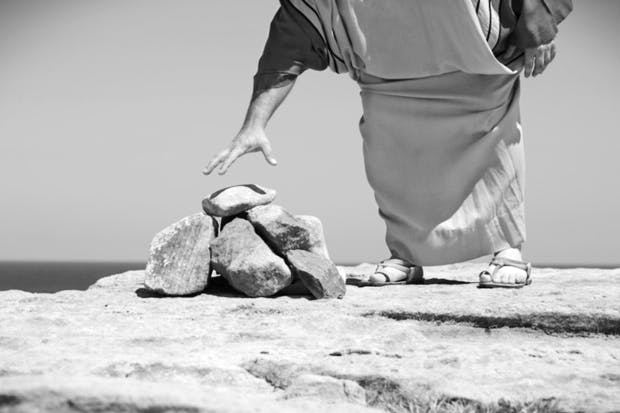 You shall have one law for him who sins unintentionally, for him who is native-born among the children of Israel and for the stranger who dwells among them. But the person who does anything presumptuously, whether he is native-born or a stranger, that one brings reproach on the Lord, and he shall be cut off from among his people. Because he has despised the word of the Lord and has broken His commandment, that person shall be completely cut off; his guilt shall be upon him. Now while the children of Israel were in the wilderness, they found a man gathering sticks on the Sabbath day. And those who found him gathering sticks brought him to Moses and Aaron, and to all the congregation. They put him under guard because it had not been explained what should be done to him. Then the Lord said to Moses, “The man must surely be put to death; all the congregation shall stone him with stones outside the camp.” So, as the Lord commanded Moses, all the congregation brought him outside the camp and stoned him with stones, and he died. (Numbers 15:29-36)

The Law of Moses was very specific in the institutions of the commands of God. One section of the law concerned unintentional sins committed because all the people sinned or in the case of the guilty individual. The priest would make atonement for the people after the proper sacrifice was given in accordance with the law. There was one law for the one who sins unintentionally but there was a different law for one who sinned presumptuously. If a man brazenly violates the law of God and blasphemes the name of the Lord by boldly rejecting the will of the Lord, that man would be cut off and his guilt is upon him. To presumptuously disregard the word of God is to despise the word of the Lord and to break the commandment of God. Treating the word of God with contempt was a grievous sin. Deliberately disregarding the word of the Lord was a very serious offense. The law was very specific this individual would be cut off from the community of God’s people.

Sandwiched in between the regulations of the law is a story that shows the nature of presumptuous sin. While the children of Israel were in the wilderness, they found a man gathering sticks on the Sabbath day. Nothing is said of the motive for the man to gather sticks together but it was a clear violation of the Ten Commandments; specifically, the 4th commandment that required the Hebrews to observe a Sabbath day and to keep the day holy. They were not allowed to labor on the Sabbath or to do work. The seventh day was a day of rest, holy to the Lord. Whoever did any work on the Sabbath would be put to death, according to the Law of Moses. This day was a holy convocation to the Lord. The children of Israel found a man who was gathering sticks together on the Sabbath bringing him to Moses to determine his disposition.

There is nothing immoral or wicked about picking up sticks. Many reasons can be given for the man to be gathering sticks together. He may need to cook his food, warm his home, or to use the fire to work with metal or other things requiring heat. Picking up sticks is not the sin but the presumptuous attitude of the man to disregard the day set aside by God to be a holy day is the motive behind his actions. After the man is brought to Moses, the Lord commanded Moses (along with all the congregation) to take the man outside the camp and stone him to death. The accused was taken outside the camp and Moses and the people picked up stones hurling them at the man until he lay dead on the ground. There can be little doubt the guilty man pleaded for his life but to no avail. A Hebrew was executed that day for picking up sticks on the Sabbath day.

It would seem a trivial thing for a man to be picking up sticks. If this were to happen today there would be a public outcry and demonstrations against the execution of the man for the nature of his act. Politicians would decry the inhumanity, activists would demand change and many religious leaders would distance themselves from the Hebrews for such a terrible crime. The guilty man’s effigy would be paraded through towns and cities as people angrily denounce the action of the congregation to stone a man to death for picking up sticks. Lost in the plethora of dissent and discord is the law of God that demands justice for those who disobey His will. The man was not executed for picking up sticks. He had six days to pick up all the wood he wanted. What he did was to despise and treat with contempt the word of the Lord. God’s law for the Sabbath was very clear and demonstrated the nature of obedience. Death may have seemed a harsh penalty for picking up sticks but the heart of the man was filled with presumptuous sin.