He Offered One Sacrifice 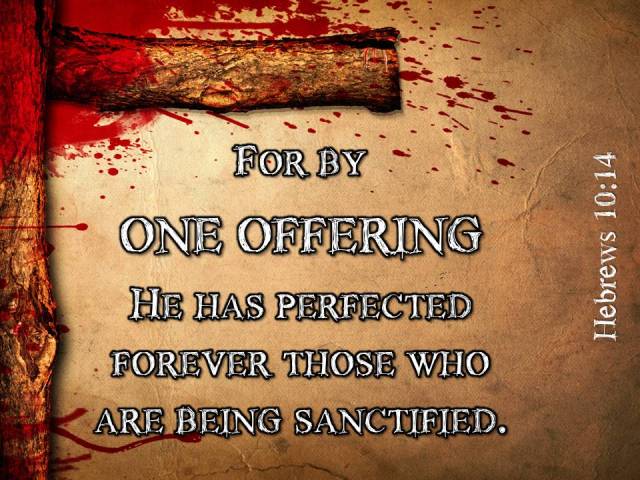 By that will we have been sanctified through the offering of the body of Jesus Christ once for all. And every priest stands ministering daily and offering repeatedly the same sacrifices, which can never take away sins. But this Man, after He had offered one sacrifice for sins forever, sat down at the right hand of God, from that time waiting till His enemies are made His footstool. For by one offering He has perfected forever those who are being sanctified. (Hebrews 10:10-14)

He Offered One Sacrifice

The temple of Solomon was one of the wonders of the world. There was no place on earth as beautiful as the place where God came to dwell among men and to shine from the glistening marble of its edifice as the house of God. For many years the people of God had gathered around the tabernacle of meeting to worship but now the grandeur of the divine grace of the Lord stood as a memorial to the everlasting promises made to Abraham, Isaac, and Jacob. From the days of early man, sacrifice was a part of the ritual of worship. The offerings of Cain, Abel, Abraham and the sacrifices inscribed on the pages of the Law of Moses all pointed to the will of the Lord turning the heart of men to the one truth that would one day be found in Jesus Christ. When Solomon dedicated the temple he offered 22,000 bulls and 120,000 sheep as a sacrifice. An incredible amount of animals in one single dedication can only be overshadowed by the thousands and thousands of animals sacrificed over the centuries of time. The Lord alone knows the number of bulls and goats given to honor Him. Every sacrifice was an attempt by man to appease the wrath of God. Instructed by the Lord to offer sacrifices, there was a divine emptiness to the blood shed by animals to atone for the sins of man. Man was made in the image of the Creator and animals possess no eternal spirit. Killing an animal for a sacrifice was no different than killing an animal to eat. When a man killed another man he committed murder because man was made in the image of God. Shedding man’s blood is abomination to the Lord as the nature of man is eternal. Taking the life of an animal does not bear the same guilt. For centuries, in accordance with the will of God, animal sacrifices begged the mercy of God to remove His wrath in granting forgiveness to man. The totality of man’s guilt would never be appeased until one sacrifice was made and that sacrifice had to be a man – not an animal.

Sanctification came to man through one sacrifice. It was not a bull, goat, sheep or animal but the body of Jesus Christ, Son of the Most High. The sacrifice did not have to be repeated because the purity of the sacrifice was eternally established by the life of one man who did not commit one sin in His entire life. Consider the implications of one sin and the outcome for the salvation of man from the wrath of God if Jesus had failed in one sin. There would be no hope because the sacrifice would have been blemished, tainted, stained, and polluted. Under the Law of Moses, the priest offered repeatedly the same sacrifices which could never take away sins because man continued to sin. There was no purity to the sacrifice either as the animal was not an eternal creature or the sinfulness of man destroyed the holiness demanded by God. Jesus, after He had offered one sacrifice for sins forever, took away the wrath of God through His perfect, sinless and completely holy life. One offering removed the stain of sin because there was no stain of sin in the life of one man.

Jesus lived for nearly thirty-three years and never – not once – disobeyed the will of the Father. He was tempted in every kind of manner available in the arsenal of Satan. Throughout His life, Jesus battled the lust of the eye, the lust of the flesh and the pride of life. At the beginning of His ministry, Satan came to Jesus in the wilderness and tried to derail His work of the Father. This was not the first time the two of them had met on the battlefield of moral courage. When Jesus came of age as a young man Satan threw his battery of evil in front of Him every opportunity the devil could find. Satan knew who the son of Joseph and Mary was and He knew that as a man the Lord would bear the marks of humanity in its frailty. Jesus overcame every temptation because He knew the one sacrifice of His life would cleanse all men of their sin. As the nails of the Roman executioner pierced His flesh, Jesus knew His final hour had come. He could see the angry crowd gathering around Him shouting and cursing Him. His eyes glanced to His mother standing with the disciples and saw the eternal love in her heart. As the soldiers crucified Him, Jesus knew this one sacrifice would bring all men to the Father. There would no longer be a need for animal sacrifice. The blood that He shed on that day on that cross outside the city where Solomon had sacrificed so many animals would be the propitiation of the sins of those who came to the cross for salvation. When He bowed His head in death, the love of God burst forth from the heart of one man crucified between two thieves that would give His life so that all men could be saved. One life. One sacrifice. One gift. One hope. One Lord. One offering.