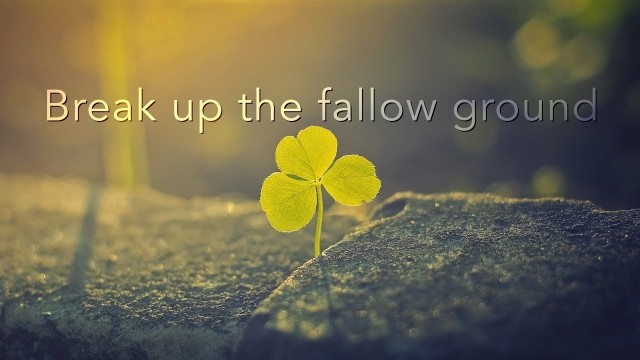 Sow for yourselves righteousness; reap in mercy; break up your fallow ground, for it is time to seek the Lord, till He comes and rains righteousness on you. (Hosea 10:12)

The days of Uzziah, Jotham, Ahaz, and Hezekiah, kings of Judah were filled with turmoil, strife, and rebellion against the word of God. Jeroboam II, the son of Joash, reigned in Israel and was a corrupt despot who did that which was evil in the sight of the Lord. God called Hosea, the son of Beeri, to be His prophet among the people and used the marital circumstance of the prophet to illustrate the poverty of the people of God in committing spiritual harlotry against the Lord and by the grace of the Lord find redemption in His love. There could be no greater burden to bear than what was asked of Hosea to show the people through his own life how they had forsaken the Lord as a bride to her husband and the eternal nature of forgiveness to take his adulterous wife back. Throughout the book of Hosea, the judgment of God is proclaimed against His people. This message is tempered with the hope found in the grace of the Lord to forgive the people if they would repent. Everything depended on the children of Israel to change their hearts, minds, and souls to serve the Lord and He gave them the path to make that choice. The need for repentance is delivered to the people in figurative language. If they would sow for themselves righteousness changing their hearts to receive the mercy of God there would be hope. Israel would need to give up her present life of rebellion and turn to the Lord in full assurance of the promise of hope found in Him. The time to seek the Lord was pressing upon them before full judgment would come. Sowing, reaping and breaking up the fallow ground is how the heart of the nation must turn to the Lord. It is a radical, abrupt and complete change to reject the idols of Baal and seek the will of the Lord. There can be no alternative. If Israel was to be saved, repentance was necessary.

It is the sad story of rejection that fills the pages of God’s people. Hosea and the prophets tried in vain to steer the people away from the impending doom but the people would not listen. Israel was taken away by the Assyrian armies never to be seen again as a people. The only two tribes remaining would face the wrath of the Babylonians many years later with only a remnant returning. The downfall of Israel was the failure to repent and change their hearts. Sin had corrupted the nation of God filling it with the trappings of idol worship and immorality. God had given them a simple formula to follow to find His grace, mercy, and love. Sowing the seeds of righteousness would have yielded a harvest of hope but the seeds were never planted. Reaping the mercy of God did not happen because the seed was not sown that would save them. The fallow ground of their hearts was hardened with the deceitfulness of sin and could not be broken up. The nation had time to seek the Lord but they allowed the time to pass without repenting and the long-suffering of God ended. Bringing the nations of Assyria and Babylon against His own people was the measure of righteousness from the Lord who had warned His people to repent and they refused. His wrath was all that was left. Without repentance, there was no hope. The people were told to forsake their sin and they refused. God’s vengeance destroyed them.

Hosea spoke to the people of God 2700 years ago but his message still resonates for all men today. Christians must take heed to the message of Hosea to see how God deals with His own people mired in the tragedy of sin. “The sinner must forsake old habits and practices, turn up the weeds and roots of evil within, and be renewed in the spirit of his mind. The heart must be cleansed from lusts and corruption. Old things must pass away, and all things become new” (Preacher’s Homiletical). Righteousness must be sown in the hearts of God’s children through the knowledge of His word. Mercy will be harvested in the bounty of the Lord’s mercy when His people turn their hearts fully to Him. The fallow ground of materialism, immorality, and covetousness must be broken up with the power of the Holy Spirit to realize the promise of eternal life. It is time to seek the Lord. Repentance is the first word of the gospel of Christ and all men must repent and turn to Jesus to live. God’s grace will save all those who come to Him but unless the heart of man repents there can be no forgiveness. Israel tried to live in the world of Baal and the world of the Lord God. No man can serve two masters, the Lord said. Sowing, reaping and breaking up is the pattern for the Christian. Judgment will come against those who refuse to repent. What happened to Israel is the pattern of God’s righteous judgment. Accept His grace today with a penitent heart. Seek the Lord now.