Fear In The Assembly Of The Saints 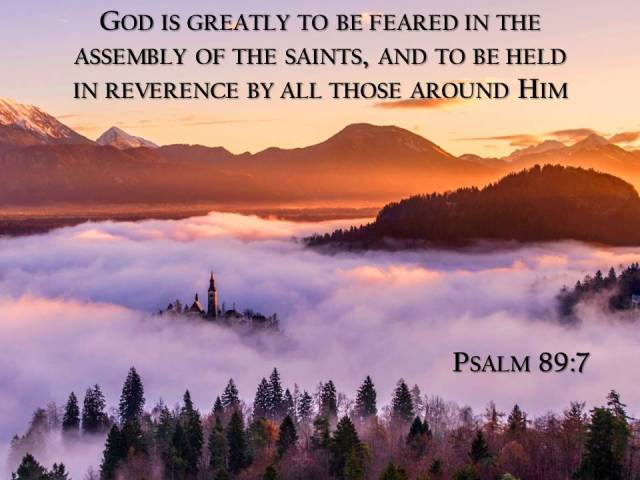 Fear In The Assembly Of The Saints

Ethan the Ezrahite was a man of great wisdom who lived during the reign of Solomon, son of David. When Solomon was compared in his wisdom it was said that he was wiser than Ethan the Ezrahite. The only writing we have of Ethan is the eighty-ninth psalm contemplating the mercies of God along with the covenant given to David. Contained in his power psalm is recognition of how powerful the time is for man to stand before the Lord God Almighty and offer worship. From the beginning of time man has known the Lord requires worship and like in the story of Cain and Abel recognizes true worship from vain. In his declaration of praise to the Lord, Ethan the Ezrahite directs his readers to focus on the assembly of the saints and the attitudes manifested by adherents to the law of God. Coming before the Lord must never be done with a cavalier attitude of disrespect for what man is permitted to do in the presence of his Maker. The world is a testimony to the awesome power and might of God. Man is the creation and must subject himself to the will of the Lord. Worship is a time of holiness and honor where men must fear standing in the presence of God. There is a sense in which men think they will stand before God and speak to the Almighty as if they are best friends on a fishing trip. Many view God as a buddy they can slap on the back, laugh and jaw with through eternity. Their perception of the Creator is one of vanity and casual association with little respect for the immensity of His being. Ethan the Ezrahite understood clearly that worship begins with a fear for the holy and reverence for the divine.

Worship has never changed in principle. The modes of worship have evolved as God unfolded His divine plan but the nature of worship will never change. All those who come into His presence to worship Him must come with great fear. This does not suggest a trembling fear of wrathful recompense but the respect and honor due to Creator by His creation. Man is not God and God is not man. True worship comes from a heart gracious for the privilege to stand before the great I AM and not be destroyed. There is no comparison to the immensity of the Lord God and the frailty of man. God can hold the entire universe in the palm of His hand. What can man do that bears any resemblance to such power? Only by His mercy and grace does He allow man to come before Him to worship Him. The first emotion that sweeps over the soul of the worshiper is that of thanksgiving for the honor to stand before his Maker. God is greatly to be feared in the assembly of the saints. John in the Revelation shows how the heavenly beings fall before the throne casting their crowns before the throne. No man can come before the One sitting on the throne without fear. The Lord God is to be revered for who He is, what He is and why He is. To revere the Lord in worship is to respect His name, honor His personality and approach Him with veneration.  All those around Him must reverence Him.

The church is the body of saints that worship according to the New Testament pattern. It is easy to follow the rote laws of proper worship and go through the motions of traditions established for generations. The great challenge is to remember that worship is not something to be taken lightly; however that is one of the greatest concerns in the Lord’s body. Often those who come to worship come to church instead. They come to a building to go through the motions of mechanical worship with little or no reverence for the occasion. Their clothing is fashioned after the world to elicit responses from others. Children are taught to ignore the meaning of worship as they play with a hosts of toys brought in to entertain, food by the bagful to placate their stomachs and electronic devices glowing in their faces. It is impossible to teach children to respect the Lord God in life when they are allowed to ignore the Lord God in worship. Adults scroll through social media during worship. Drinks are carried in from coffee shops, fast food drive through and mugs from home. Holidays like Easter, Halloween and Christmas invade the church services with carnal trappings of costumes festooned from the unholy world in a holy place of worship. Saints of God lose focus on the purpose for gathering together to worship the Lord, study His word and revere His name. Ethan the Ezrahite reminds all worshipers to come before the Lord with fear and reverence. The name of God will be glorified and His honor will be manifested by His majesty.