The True Nature Of God 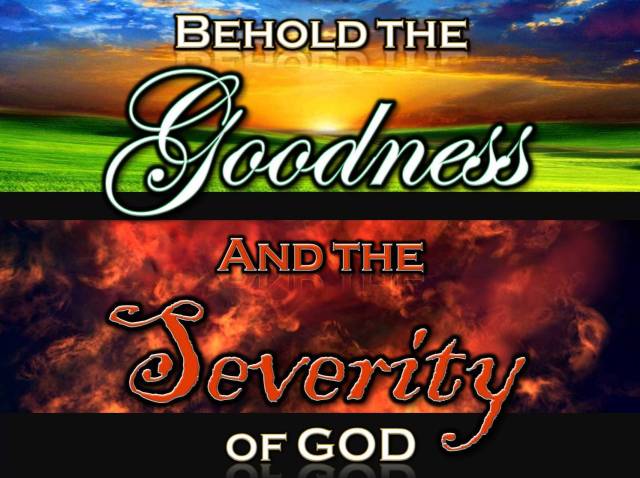 Therefore consider the goodness and severity of God: on those who fell, severity; but toward you, goodness, if you continue in His goodness. Otherwise you also will be cut off. (Romans 11:22)

The True Nature Of God

It is easy to think of God as being a kind, benevolent old man sitting on a brilliant throne with angels swirling around Him as the heavens fills with the praises of eternity. Everyone is standing before the throne as He smiles down upon all men. There is comfort in the knowledge that no matter how a person lives he can go to heaven. God welcomes all men into His embrace. All religions, in whatever form they decide to approach God, will be there. There is a feeling that no matter what happens on earth all men will enjoy eternal life in Heaven because the Lord God is all compassionate, all loving and all forgiving to the sins of man. This hymn of deception is the same tune the devil played for Eve in the Garden of Eden. There is some truth but in reality it is all a lie.

God is compassionate beyond the understanding of man. Thinking of the Lord in terms of forgiveness is one of His remarkable traits that He would consider forgiving man of sin. His greatest show of love was sending His Son to die for all men. There was nothing in man that would deserve such a sacrifice. The reason Jesus died was because of the hatred of men – His own creation. They abused Him, rejected Him, beat Him and nailed the Son of God to a cross and the Father allowed that to happen. His plan was fulfilled in the resurrection of His Son from the dead so that all men could inherit eternal life in Christ. The grace of God is unbelievable. His mercy is so great the universe could not hold the truth of His love. He stands ready to forgive and accept men into His bosom so they may live with Him forever. But there is another side of God that most refuse to acknowledge. Salvation is offered is Jesus Christ but the vast majority of men will never accept it. Because of their refusal the Father will punish them with eternal fire.

The nature of God is twofold: His goodness and His severity. Salvation has always been conditional. There has never been a time when the choices of life and death have not separated men from the will of God. Why did God save Noah and his family but destroy every human being on the face of the earth in the flood? The goodness of the Lord was shown to Noah because he found grace in the eyes of God. Noah and his family lived according to the word of God and they tried to follow His will. Saved through grace the family of Noah stepped out of the ark on a world destroyed because of the wrath of God. This came about through their obedience to His word. Those who perished suffered destruction because they refused to accept the word of God. The goodness of God saved eight people and the severity of the Lord destroyed everyone else. This pattern of grace is seen throughout scripture. Jesus taught His Father was love but He also taught His Father was a severe God.

One of the most familiar passages in the Bible is where Jesus said that God so loved the world that He gave His only begotten Son; that whoever believed in Him would not perish but have everlasting life. The goodness of God is found in His love and the promise of everlasting life. His severity is realized when He warns of those who will perish. If you believe in God you will not perish. The severity of the Lord is a reality. Refusing to obey God will bring punishment. Not everyone is saved because most men will be lost. Jesus explained this in His mountain sermon. Entering by the narrow way is the path of salvation and the broad way is where most people live. The end of the broad way is destruction. The goodness of God is wonderful. There is another side of God that cannot be ignored and that is the severity of God. Obedience will bring blessing. Disobedience will bring the harsh judgment of the Father upon those who refuse to obey Him. God is love. He is also severe.