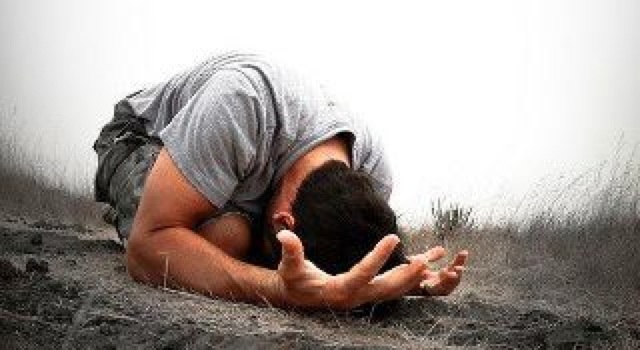 Also He spoke this parable to some who trusted in themselves that they were righteous, and despised others: “Two men went up to the temple to pray, one a Pharisee and the other a tax collector. The Pharisee stood and prayed thus with himself, ‘God, I thank You that I am not like other men–extortioners, unjust, adulterers, or even as this tax collector. I fast twice a week; I give tithes of all that I possess.’ And the tax collector, standing afar off, would not so much as raise his eyes to heaven, but beat his breast, saying, ‘God, be merciful to me a sinner!’ I tell you, this man went down to his house justified rather than the other; for everyone who exalts himself will be humbled, and he who humbles himself will be exalted.” (Luke 18:9-14)

The problem with man has always been he has thought of himself more highly than he should. Goliath was an incredible specimen of humanity standing over nine feet tall. Anyone standing in his shadow would have been dwarfed by the size of this behemoth. The young lad David was but a “ruddy youth” compared to this mighty warrior from Gath. As big as Goliath was, there were trees bigger than him, mountains taller and the moon so far away it could not be touched by man. The proportion of man is miniscule compared to the immensity of the Creator. He holds the stars in His hand and numbers each one calling them by name. All the mountains and seas were formed by His word and retain their place in accordance with His will. So why would a man stand and brag to God about how great he is?

Two men came to pray; one to brag, the other to pray. The Pharisee is not unlike most men who have a deep feeling of prideful self-worth. He had a lot to brag about and tell the Lord his accomplishments. His prayer begins with elevating himself to the level of God. It was not an intercessory acknowledgement of humility but a ‘matter-of-fact look-at-me’ statement reminding the Lord God how important this man thought of himself. He thanks God he (the man) is not like other men. Head unbowed and heart lifted up, the Pharisee assumed the position of divinity because of all his goodness and purity. His moral compass was perfect and all knew his actions toward God as he checked off the list of fasting and giving from his abundance. In the heavenly hall of fame, he was a charter member. How deserving of God’s love this man thought of himself. He walked with a smug feeling of religious superiority. And why not? He was God’s man on earth – or so he thought.

The camera moves to the second man. He is not in a place of prominence but off to the side. No one takes notice of this pious man. His head is bowed as his body slumps in humble mercy begging for the Lord to take just a glimpse of his worth. He does not begin his prayer with bragging or explain to God how much good he has done in life and how religious he is. The only thing he can say is how much he needs the eternal mercy of a loving Father. Seven words make up one of the most powerful prayers in scripture. It begins with the acknowledgement of sovereignty. It implores mercy where mercy is not deserved. It ends with the cry of dependence. There is nothing to brag about. This prayer is simple yet powerful because it speaks to the heart of man and God. The tax collector was a despised man among his people but in the eyes of the Lord, he was a giant. His justification did not come with reminding God of how great he was. This man’s heart was grieved for the sin that separated him from his Lord. He only wanted the grace of God to fill his heart and take away his sin. His spirit was not demanding but appealing with tears.

Two men went to pray but only one left with the blessing of the Father. The man who bragged went away with more to boast. With little notice, a man standing afar off quietly returned home a righteous man. Death came to both men. There was great boasting and righteous lamentation for one. They spoke of all the good deeds he had done and how he prayed such beautiful prayers. He kept himself pure before extortioners, the unjust, adulterers and the despised people of his own race. Swelling words from fellow Pharisees rang clear the day they buried their fellow hypocrite. On the other side of town, an unknown tax collector quietly slipped the bonds of mortal flesh and was received by the angels of God to glory. He was justified while the Pharisee found himself in a place of torment. Eternal justification came from a heart that was humble.

The humility of hypocrites is, of all pride, the greatest and most haughty. (Martin Luther; 1483-1546; Table Talk)