What We Have Done To God 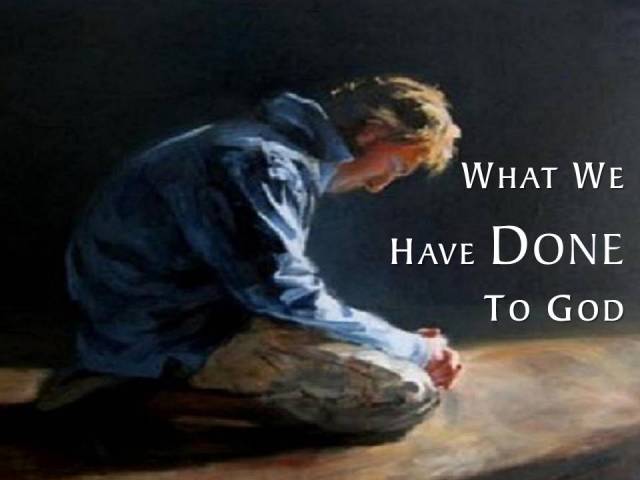 The Lord is merciful and gracious, slow to anger, and abounding in mercy. He will not always strive with us, nor will He keep His anger forever. He has not dealt with us according to our sins, nor punished us according to our iniquities. (Psalm 103:8-10)

What We Have Done To God

The mercy and goodness of God are eternal. There is nothing man possesses to measure the immensity of abundant kindness of a wrathful Creator held in check by His omnipotent love for humanity. God created the world in perfection and with willful disobedience man destroyed it in one stroke. During the days of Noah, the moral fiber of humanity had deteriorated almost to being an animal and God destroyed everything with the breath of life except Noah and his family. The flood did not stop man from sin. It changed the consequences and paved the way for the coming of Christ. God sent His Son to die for all men but this did not stop sin. Sadly, the character of man continues to rebel against the will of God. Sin rules in the heart of the majority of humanity leaving the vast multitudes of those who die facing eternal perdition.

Jesus did not take away sin but He prepared a way to find peace in the face of God’s wrath. His blood cleanses the repentant from the scourge of sin making them holy in the sight of the Lord. Among the many blessings of a Christian is the power to stand before the throne of God seeking forgiveness. Through the grace of God’s love, He is willing to remove sin as far as the east is from the west. When a man becomes a child of God he obtains the love of a Father who is tender and compassionate to those who fear him. As a Father full of forgiveness, the Lord knows how weak men are and that the life of a man is nothing more than dust. The measure of God’s mercy is boundless.

When a man understands the love of God and how by grace a man is saved, he must come to terms with the reason for God’s love and grace. There is nothing worthy in man to justify the sacrifice of God to give His Son. Jesus died on the cross because of His love for His Father and then because of His love for those who killed Him; and that did not happen two thousand years ago. It is easy to blame the envious Jewish leaders for the death of Jesus and to feel secure in the misguided thought that no one else is to blame. Jesus died on the cross because of what Adam and Eve did, for the lies told by Abraham, the murder committed by Moses, and the smugness of the many sins David committed in the story of Bathsheba. The Lord told His disciple He was dying for the salvation of the world and that extends through every generation. Saints were living in the Black Forest of Germany in 1325 that Jesus died for. Far way in the sun-drenched plains of the African safari, Jesus died for believing Ethiopians. In the eastern reaches of the Mongol lands of China, the Christ died for those who turned their hearts to serve the one true God. In modern America, Jesus died for all those who obey His commands. Jesus died for me because of my sin.

Pride clouds the memory of a man who does not recognize what he has done to God. Sin is an abomination to the Lord and the frequency of sin continues through every person. None is perfect suggesting that every man sins – no matter how good they are. The apostle Paul called himself the worst of sinners but in truth, no one can claim that title because every man is the chief of sinners. Every person stands before God with the stain of sin. Sadly, those who have not washed their sins away in the blood of Christ through baptism will never enjoy the promise of cleansing. And yet – those cleansed must still contend with sin.

God is merciful and God is kind and God is slow to anger. What we must believe is God has not punished us according to our sins and He has not punished us according to our iniquities; and thank God He has not. Has it crossed our minds how often we sin against Him and He continues to forgive us as we repent? His unfailing love toward us is as great as the height of the heavens above the earth. There is no end to His love when His children seek His kindness. As we grow older in Christ we will be able to strive more effectively against the wiles of the devil. It is possible to sin less in our lives but we can never live sinless lives. Even if we were able to sin but once in our life would we still not feel shame toward the cost of God’s love in sending Jesus? Imagine our greater shame when we sin more than once? Thank God for His incredible love, mercy, grace, and forgiveness. Bless the Lord, O my soul.