King Ahab And The Bible 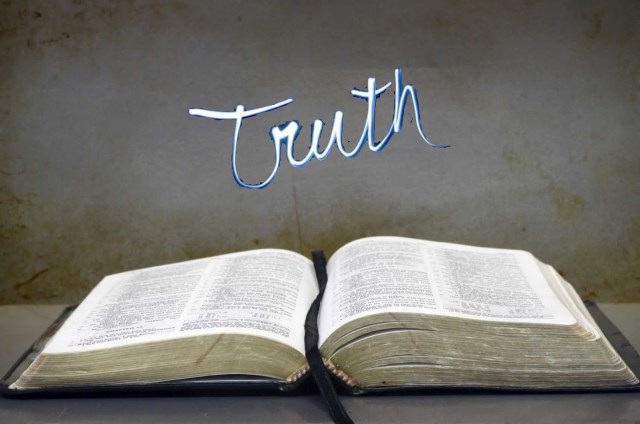 Now a certain man drew a bow at random and struck the king of Israel between the joints of his armor. So he said to the driver of his chariot, “Turn around and take me out of the battle, for I am wounded.” The battle increased that day; and the king was propped up in his chariot, facing the Syrians, and died at evening. The blood ran out from the wound onto the floor of the chariot. Then, as the sun was going down, a shout went throughout the army, saying, “Every man to his city, and every man to his own country!” So the king died and was brought to Samaria. And they buried the king in Samaria. Then someone washed the chariot at a pool in Samaria, and the dogs licked up his blood while the harlots bathed, according to the word of the Lord which He had spoken. (1 Kings 22:34-38)

King Ahab And The Bible

God’s word is certain. It is true. There is no shadow of turning in the clarity of His word. No man can escape the word of God as it is settled in heaven. When the Lord makes a promise, it will come to pass and can only be changed by the will of God’s own might. Nothing man can do will hinder the will of the Lord is accomplished. Hiding is of no avail. Running away is useless. Ignoring God will not deter Him. The Lord will carry out His divine will in the fashion that suits His glory.

Ahab was the seventh king of Israel and was one of the most wicked rulers in Jewish history. His wife Jezebel had an immense influence upon him leading the northern tribes of Israel through twenty-three years of brutal oppression, murder, war, and unbridled immorality. Through the prophets Elijah and Micaiah, Ahab was condemned for his rebellion and a final pronouncement was placed upon his life. When the king of the southern two tribes came to Ahab seeking unity to fight at Ramoth Gilead, Ahab joined forces with Jehoshaphat after his prophets pronounced victory for the kings. Micaiah was called to declare the word of God to Ahab telling him the king he would die in battle.

When the battle began, Ahab disguised himself and went into battle. Thirty-two captains of the Syrian army were seeking to find and kill Ahab. Their only mission was to find the king of Israel but failed to find him. It seemed Ahab had escaped death as prophesied by Micaiah. And then a remarkable thing happened from the hand of God. A soldier from Syria randomly shot an arrow at the Israelite troops and hit the king of Israel between the joints of his armor. Ahab bled to death in his chariot. He was brought back to Samaria and buried. As much as he tried to change the word of God, the king of Israel met the fate as declared by divine will.

Nature declares the nature of the word of God. On the fourth day of creation, the Lord set the sun, moon, and stars in their place. In the thousands of years, the world has stood, the sun continues to do what it was purposed to do. The moon has remained in its orbit with constancy. All of the stars of the heavens continue to declare the glory of God unmoved and unchanged by the events that happen on earth. No matter what man does, the sun, moon, and stars remain constant. When Moses penned the first books of the Bible he determined the word of God as true and they have remained unchanged. The Old Testament is established upon the same word and the New Testament declares the majesty of the unchanged word of God. The Bible declares the glory of God as do the heavenly bodies.

Denying truth does not change the truth. Ignoring truth will not decrease the word of God. Seeking to change the word of God will only corrupt the mind of the person, not the word. When God told Ahab he would die, it was through the agency of a random person to accomplish what the Lord determined. His word would not be changed. The death of Ahab is an example of the power of the word of God. Forever, O Lord, Your word is settled in heaven.