Sanctification By The Word

Posted on February 4, 2020 by heatonkent 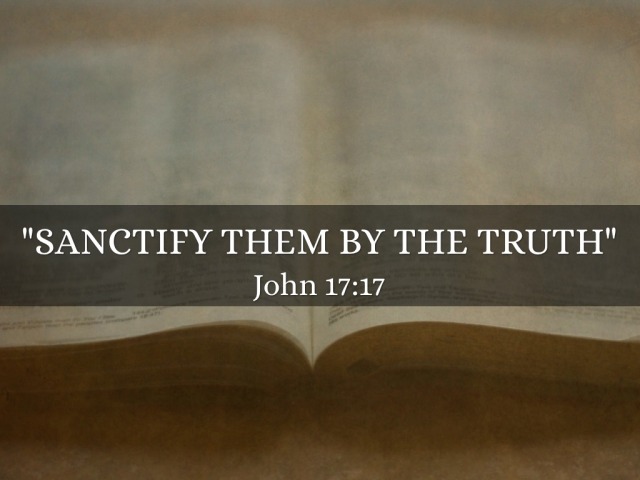 Sanctify them by Your truth. Your word is truth. As You sent Me into the world, I also have sent them into the world. And for their sakes, I sanctify Myself, that they also may be sanctified by the truth. I do not pray for these alone, but also for those who will believe in Me through their word; that they all may be one, as You, Father, are in Me, and I in You; that they also may be one in Us, that the world may believe that You sent Me. And the glory which You gave Me I have given them, that they may be one just as We are one. (John 17:17-22)

Sanctification By The Word

God’s will for the believer is to be separate, set apart, consecrated, and holy to His purpose. The challenge of sanctification has been the battle between the spirit and the flesh with the carnal man very difficult to subdue. Obedience to the will of God is not an easy task. It takes more than just an idea or notion of holiness to keep oneself from the temptations of the flesh and eye and pride that exalts the heart. Submission to the Lordship of Christ is more than an inward expression of faith. The character of discipleship comes from a separation of the soul by the word of truth gleaned from the mind of God. Jesus was well aware of the challenges the eleven apostles were going to face in the days following His death. In his final prayer for them, He implores His Father to bless the eleven with the strength of the Divine to carry out the work of preaching the gospel to the world that would come from the word of God. Preaching requires the word and salvation come from obedience to the word. Separating life from the trappings of the world is accomplished by the infusion of the word into the marrow of the spiritual man who seeks a holy walk with the Father. Jesus is asking His Father to help mold the eleven by His truth, teaching them His word so that they would not be like the world. The eleven apostles were going into the world to change the hearts of men to the message of a risen Christ. Jesus was willing to die to show His disciples the example of sacrifice so they could be made holy by the word of God. It takes sacrifice to be separate from the world. Holiness comes from the truth of God’s word.

W. E. Vine says, “This sanctification must be learned from God as He teaches it by His word and it must be pursued by the believer, earnestly and undeviatingly. This is the holy character of the disciple.” Christianity is a powerful feeling of joy, redemption, peace, comfort and love in the Holy Spirit. In the early church, there are many passages that speak to the joy of salvation in Christ. Paul penned a letter while in a Roman prison to the church in Philippi that was filled with the message of rejoicing and joy. The Ethiopian treasurer went on his way rejoicing after Philip helped him understand the scriptures more fully because the truth is where joy comes from. When a man is overwhelmed with sin and the depravity of the carnal man, there is no joy and no hope. Hearing the word of God and the wonderful grace of a merciful Father brings rejoicing to the downtrodden soul because the word convicts the heart and changes the heart from despair to hope. Sanctification comes from the truth of God’s word. Christianity is not a caught religion but a taught religion. Joy comes from the knowledge of the truth. Learning to stand apart from the world is developed when the mind centers itself upon the mind of God. Jesus prayed not only for the eleven but for all those who would believe in Him through the teachings of the eleven. This would establish the continual thread of the divine word bringing joy to the hearts of disciples for the next two thousand years and beyond.