Dying Of Thirst And Looking For God 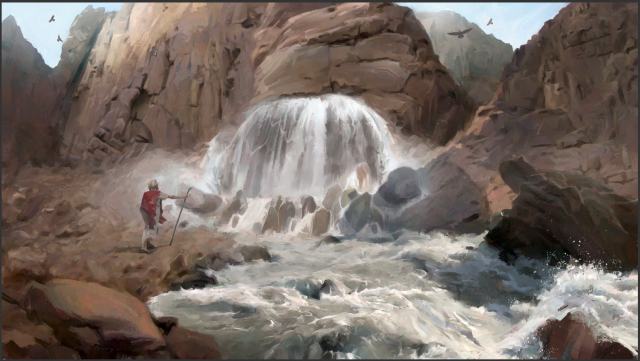 Then all the congregation of the children of Israel set out on their journey from the Wilderness of Sin, according to the commandment of the Lord, and camped in Rephidim; but there was no water for the people to drink. Therefore the people contended with Moses, and said, “Give us water that we may drink.” So Moses said to them, “Why do you contend with me? Why do you tempt the Lord?” And the people thirsted there for water, and the people complained against Moses, and said, “Why is it you have brought us up out of Egypt, to kill us and our children and our livestock with thirst?” So Moses cried out to the Lord, saying, “What shall I do with this people? They are almost ready to stone me!” And the Lord said to Moses, “Go on before the people and take with you some of the elders of Israel. Also take in your hand your rod with which you struck the river, and go. Behold, I will stand before you there on the rock in Horeb; and you shall strike the rock, and water will come out of it that the people may drink.” And Moses did so in the sight of the elders of Israel. So he called the name of the place Massah and Meribah, because of the contention of the children of Israel, and because they tempted the Lord, saying, “Is the Lord among us or not?” (Exodus 17:1-7)

Dying Of Thirst And Looking For God

The Hebrews witnessed the incredible power of God when the Lord brought the plagues on Egypt in a way few peoples would be able to recall. All the waters that were in the streams, rivers, ponds, and pools of water became blood when God first began to bring His wrath against the nation of Egypt. Then the land was covered with frogs which afterward died filling the land with a great stench. Lice infested man and beast throughout all the land of Egypt and then millions of flies filled the sky and ground as thick swarms of flies corrupted the land entering into every house. All the livestock of Egypt were stricken and died from a great pestilence including the cattle in the fields, horses, donkeys, camels, oxen and on the sheep. Soon fine dust settled on the land of the Nile causing boils to break out as sores on man and beast. The plagues of God continued when the Lord caused a very heavy hail to rain down such as not been in Egypt since its founding followed by an east wind bringing a storm of locusts that went up over all the land destroying everything in its path. Then three days came when the land was covered in thick darkness so terrible no one moved from their houses for three days. In the final and complete plague, the Lord went into the midst of Egypt and all the firstborn in the land of Egypt died, from the firstborn of Pharaoh to the firstborn of the female servant who was behind the hand mill and all the firstborn of the animals. The cry was so great there was not a house in Egypt where there was not one dead. As the wrath of God came upon the Egyptians, the Hebrews were spared from the onslaught and destruction but they witnessed the power of God against their enemies. It would be highlighted by the crossing of the Red Sea when the Lord parted the waters allowing the people to cross on dry land. When the remaining elements of the Egyptian army pursued the people into the sea the waters closed around the chariots, horsemen and all the army of Pharaoh and no so much as one of them remained. Israel saw the Egyptians dead on the seashore. Three days later they came to Marah but the water was unfit to drink. Moses showed the power of God when he was instructed to throw a certain tree into the waters and the waters turned sweet. Later, when the people complained about needing food the Lord provided manna that would be provided for them for forty years.

It had only been a couple of months since the deliverance of Israel from Egypt when the people contended with Moses against the Lord. The plagues against Egypt were powerful testimonies to the wrath of God, His power to rule the world and bring the death of thousands of people in one night. There was a clear separation of what happened to Egypt and the preservation of the Hebrews. They did not suffer as their captors and the Lord made certain they could see His grace upon the children of Abraham. When the Red Sea was parted by a strong east wind and the Hebrews walked across on dry land it should have been an awe inspiring, life changing confirmation of the unlimited power of God. The destruction of the Egyptian army was a message that God controlled all nations and no people would be able to stand against the might of the nation of Israel. As a people, the multitudes brought out of Egypt had every sign given to them to show how God was with them and would care for them in every way. However, shortly (in less than a few months) the people strove and quarreled with Moses because they were dying of thirst. In an incredible expression of ingratitude, the people actually complained about being delivered from Egypt. Had they forgotten their cries to the Lord when they were being oppressed by the taskmasters of Egypt? How soon the minds of the people looked back on their bondage as a time of joy when in fact it was an affliction of sorrow, misery, and slavery. They began to question whether God was going to take care of them and whether He really was a great God or not. Did they not have ample evidence of how God had taken care of them, provided for them and protected them from the fury of the Egyptians and now they contend with Moses about being thirsty.

Dying of thirst and looking for God to deliver them, the Hebrews reveal the fickle character of the heart of men who see the power of the Creator and deny He exists. The Bible declares the mind of God for everyone to read and understand the grace and mercy of the Lord yet the majority of people in the world live outside the bounds of God’s love complaining about wars, suffering, and misery. Why do most people not see God? The truth lies in the adage that a person finds what they are looking for and what they see is what they will find. Israel had every opportunity to see firsthand the immense power of God and questioned whether He was among them or whether He would take care of them. Their carnal hearts were filled with the complaint because God was not serving them in the manner they demanded. This pattern would continue for the next forty years as they rejected the providence of God to conquer the promised land and to believe He would provide all their needs. The story of Israel is not unlike those today who view the Bible with disdain rejecting its teaching as archaic, out of step and mere myths and fables. Everything God has done to provide a written testimony of His character is refused because people are thirsty for their carnality and selfish desires. The invisible attributes of God are clearly seen and the revelation of His word is available for all men in every nation and tongue so that they are without excuse. It is sad to see millions groping about dying of thirst when the fountain of life is within their grasp. The Hebrews saw the power of God but could not see His grace. It is tragic the only hope man has is found in the book he rejects and his death will not come about from lack of water but lack of faith and obedience.