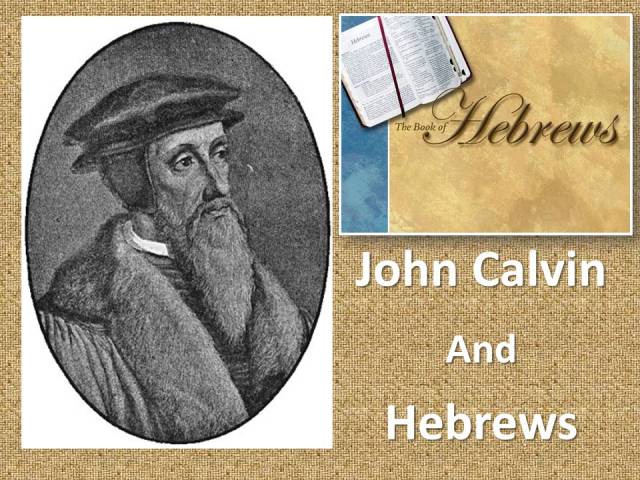 Beware, brethren, lest there be in any of you an evil heart of unbelief in departing from the living God; but exhort one another daily, while it is called “Today,” lest any of you be hardened through the deceitfulness of sin. (Hebrews 3:12-13)

One of the greatest influences on the tapestry of religious diversity is found in the teachings of a 16th Century French theologian named John Calvin. His work revolutionized the movement to reform the Roman Catholic Church laying a foundation that is still a major part of most protestant churches. The tenets of Calvinism are summed up in the acronym TULIP: Total depravity; Unconditional election; Limited atonement; Irresistible grace; and the Perseverance of the saints. It is common to hear the final part of the TULIP doctrine as “once saved always saved” in modern vernacular suggesting the impossibility a child of God could lose their salvation. Baptists largely believe this doctrine accepting the idea that true believers will never fall away from the faith or lose their salvation. Other faiths believe in various forms of this doctrine. This doctrine of ‘once saved always saved’ flies in the face of what the Bible teaches concerning the possibility of the saved being lost and especially the writings to early Jewish Christians who, because of severe persecution, were desiring to return to the Law of Moses and the covenant of animal sacrifices. The book of Hebrews is filled with admonitions for the early Jewish Christian’s to not cast away their confidence and find them drawn back into perdition. They are warned against having a heart of unbelief, hearts hardened through the deceitfulness of sin and because of rebellion not allowed to enter into eternal rest. From the beginning of the book, the author implores the saints of God not to drift away and to neglect so great a salvation. This does not sound like the language of Calvinism suggesting the impossibility of the saints losing their souls. If this were the case there would be no reason to have the book of Hebrews. Clearly, the Jewish disciples faced incredible persecution that was chipping away at their faith and they need to be encouraged to maintain their faith in the better promises of God.

Calvinism is a doctrine of comfort giving the believer a false sense of security that nothing he or she can do will endanger their eternal reward. The Bible teaches the acceptance of eternal promises given to those who remain faithful and the knowledge of eternal life. To suggest that a person can live any way they desire and not lose their soul is a false understanding of God’s word. The Hebrew Christian’s were admonished to keep their hope in Jesus Christ as He was a better Messenger, Apostle, High Priest and example of sacrifice. In the law of Christ there are better promises and better rewards found only in keeping faith in the new covenant. There are warnings against their hearts being hardened and having evil hearts of unbelief. The nation of Israel is used as an example of those whom the Lord destroyed in the wilderness because they did not believe and did not enter Canaan or the land of rest. If Calvinism is true then the Hebrews who died in the wilderness were never Hebrews to begin with and everyone (including those who rebelled at Kadesh-Barnea) would have crossed the River Jordan into the promised land. However, the text is very clear the ten spies who denied the power of God died in the wilderness along with all those above the age of twenty because of their unbelief. Those who died in the wilderness were Hebrews, citizens of the nation formed at Sinai called Israel, children of God. Further warnings from the book of Hebrews exhort the first-century Jews not to come short of the promises of God by ignoring the will of the Lord and going astray. The author specifically warns the Christian’s not to fall away and become sluggish. If they sinned willfully they could trample the Son of God underfoot, count the blood of the covenant a common thing and insult the Holy Spirit. The real message of Hebrews is to tell the saints not to cast away the only hope and confidence of eternal life in Jesus Christ.

Near the end of the book of Hebrews, a final warning is given to not be carried about with various and strange doctrines. John Calvin taught a theology that many have embraced to their eternal destruction. Sadly the plain teaching of the Bible shows the result of those who will fall short of the grace of God as the Hebrew author explains in his book. Only those who keep the faith and trust in the will of the Lord will find the blessings of eternal life. In that great chapter of faith the saints are admonished to have the vibrant faith of the ancients who showed their faith by their works. James will show later Abraham was justified by faith and works. Salvation by faith only cannot save. The book of Hebrews is a firm declaration that Satan is seeking to destroy the lives of God’s people and without a heart resolved on keeping the faith of the gospel the danger becomes very real for the Christian. Salvation is a choice granted by the grace of God where the individual shows his faith by his dedication to the covenant of Jesus’ blood. With the power of God, there is nothing the devil can do but when the word is not mixed with faith the result will be like the judgment against Israel where God did not allow them to enter His rest. There remains a rest for the people of God who are diligent to enter that rest through obedience. Knowing and living the word of God which is living and powerful, and sharper than any two-edged sword, piercing even to the divisions of soul and spirit, and of joints and marrow, and is a discerner of the thoughts and intents of the heart. All things are naked and open to the eyes of Him to whom we must give account. Therefore, let us hold fast our confession.