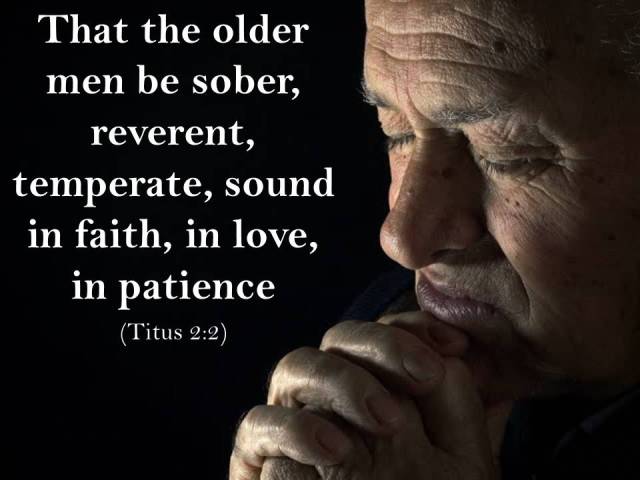 But as for you, speak the things which are proper for sound doctrine: that the older men be sober, reverent, temperate, sound in faith, in love, in patience. (Titus 2:1-2)

Age is relative to the person speaking making it difficult to suggest when a man becomes an old man and when a woman is considered an old woman. The Holy Spirit does not use the language of the old man or woman but rather the idea of the older man and older woman. As aged men, the apostle Paul writes to Titus to exhort these men to put a proper example before those younger than themselves. A great principle is given in this letter as Paul wants to show the older men how to conduct their lives as good examples of sound faith before those who were younger. Six qualities suggest the character of older men so they can be proper examples to young men and women. Temperance is a virtue of older men who have a sober mind about them. Age is often viewed as a time of greater wisdom as life has taught the individual the frivolity of seeking after things of little or no value. Sobriety is a character that brings seriousness to the view of life. Maturity is to mold the heart of older men to know the value of life and how to impress upon the young the need for guidance and direction. Sadly, many a man has entered into a second childhood in his older days and gives way to excesses of youth. He shows by his lack of self-control he has not learned the important lesson of life that must be focused on the reality of a full life. Paul’s admonition to Titus is especially needful to see the maturity of faith that should characterize the hearts of older men. There should be a deeper appreciation for spiritual matters in the hearts of older men. Young men need guidance from those spiritually mature. Older men should be sober in their understanding of the word of God. Reverence, gravity and possessing a dignified example is how older men lead the way for young men to be good husbands and fathers. Having a sober example of speech seasoned by the word of God, dressing with a modest spirit and presenting a character of holiness is the kind of example young people must see in the lives of older men. This is especially seen as an older man is sound in the faith. There is a confidence in the heart of the older man that shows a trust in the will of the Father. Through years of study, the older man has found a way of righteousness to be true and the answer to life’s challenging questions. God’s word is the foundation of his life in everything he does. As an older man, he paves the way for the young man to establish his steps in the grace of the Lord knowing there is more to life than what appeals to youth. Further, the older man is an example of love and patience. There is no bitterness or sour spirit in the heart of a man who has learned to love the Lord. Through advancing age the soul of an older man shows to youth the beauty of love for God and love for others. This love is more than words but shows itself in action, duty, responsibility, and example with a patient and steadfast devotion to the will of God. Perseverance is one of the most important traits older men must teach to the next generation. Life is not a sprint but a marathon reaching toward an eternal home.

The six qualities of older men are given to lead the younger men and women to be better individuals in the world. Leadership is helping others achieve the goals that will make them successful in life and the example of older men leading the youth of the world will do more to stem the tide of wickedness than any other measure. What the world needs desperately is older men leading as examples of spiritual conviction that God’s word is true, His ways are right and life is short with eternity hanging in the balance. Success in life is not measured by ledger books, academic degrees or finding a place in history but finding the love of God and the heart of righteousness that can face life with resolve and a spirit of understanding for what is important in life. Older men need to be teaching younger men and women the spiritual values of godliness. This must begin first in their own lives as they have learned the truth. No greater truth can a man share with others than a life lived wholly in the protection and care of the word of God and the love the Father. What young people must see in the hearts of older men is Jesus Christ and Him crucified. Young husbands learn from older men how to love their wives. Young fathers will know the joy of teaching their children about God when older men show them the example of guiding their own children in the way of truth. Sober-minded, dignified, self-controlled, sound in faith, full of love, and steadfastness older men will leave an indelible impression on youth.

A final observation about youth. Oftentimes it is said that youth is filled with wastefulness and there exists a great lack of spirituality. This can be attributed to many things as young people are tempted to follow the ways of the world and are easily led into temptation. One reason that may be overlooked is the reason young people act the way they do is because this is what they see in older people who do not act their age. If you look at the six qualities listed by the apostle Paul and consider where some of the attitudes of young people come from, it is not hard to see that men who are not sober, lacking spiritual minds, frivolous and have little faith in the word of God would lead the youth in the same pattern. When men fail to take leadership roles in the church they teach the young men the work of the church is not important. Fathers who fail to show the proper example to their children of spiritual growth will only teach their children to seek worldly things rather than spiritual. Older men who spend their years devoted to the cares of the world teach young men that life is full of carnal pleasures. The church is in desperate need of men to serve as elders yet the body of Christ is filled with older men who have not prepared themselves and their families to shepherd the church of God. Sound doctrine must the foundation of the church and this kind of sound doctrine comes from the examples of older men teaching younger men and women the spiritual values of eternity.