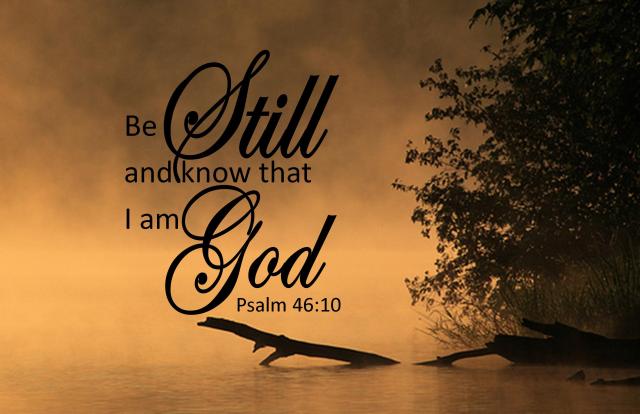 There is a river whose streams shall make glad the city of God, the holy place of the tabernacle of the Most High. God is in the midst of her, she shall not be moved; God shall help her, just at the break of dawn. The nations raged, the kingdoms were moved; He uttered His voice, the earth melted. The Lord of hosts is with us; the God of Jacob is our refuge. Selah

Come, behold the works of the Lord, who has made desolations in the earth. He makes wars cease to the end of the earth; He breaks the bow and cuts the spear in two; He burns the chariot in the fire. Be still, and know that I am God; I will be exalted among the nations, I will be exalted in the earth! The Lord of hosts is with us; the God of Jacob is our refuge. Selah

(Psalm 46: To the Chief Musician. A Psalm of the Sons of Korah. A Song For Alamoth.)

The world can be a frightful place. Through each generation armies of men march who seek to rule the world and bring sorrow and death to millions. Trouble can be found in every corner of the globe and the hearts of people melt before the trials they face and worries that overcome their spirits. No generation is immune. There will be trials for all people throughout all time but God has given His people three great truths that will assure them of hope, victory and peace. These principles are not new as they have been given to man from the beginning. The sons of Korah praised the Lord when they wrote this powerful psalm to illustrate for the people of God there was nothing to fear from anything the world had to offer.

Truth number one: The Lord God is the refuge and strength of His people. Trouble is real and trials are ever present. No man can escape the challenges of life and for those who call on the name of the Lord this will be heightened. Understanding the Creator of the universe is ready to protect, guide and help the faithful soul through the storms of life will take away all fear and trepidation. God is not the Lord of only the big things but He is the Lord of all the small things in life. There is nothing that God will not help and protect His children from. He is a great help in times of trouble because He is all-wise and all-powerful to effect change for His children. There is nothing to fear as God takes fear away. Catastrophic events will not move the heart of the faithful because the Lord is greater than anything. The psalmist supposes that if the earth was removed or the mountains moved into the depth of the sea the saints of God would have nothing to fear. Trusting in the Lord God Creator takes away fear. His love overshadows the heart to trust in His divine will and eternal power to protect the heart of His children.

Truth number two: while the world races along at a frantic pace of self-destruction the child of God walks in peace, comfort and serenity because the Lord God is in their hearts and He brings peace and calm to the troubled soul. When the presence of the Lord is in the midst of the soul of man he will find the peace that passes understanding as the will of the Lord guards the heart from the pressures of the world. Worship is the soothing music of trusting in the promises of God when the nations rage and the affairs of life overwhelm the soul. God is in the midst of His people. No other protection and care will offer the solitude and security of His presence calming the soul than the praise of the most high God. Storms rage in life but the Lord is the one who says, “Peace be still.”

Truth number three: there is none other like the Lord God. Men try to exalt themselves above the one who made them, formed him from the dust of the ground and breathed life into him. In the futile attempt to depose the Lord from His throne, man shows his shallow wisdom as futile and useless. The weapons of man are nothing before the arm of the Lord. Bows, spears and chariots are nothing to the power of the Almighty. All the military might of the nations combined are but dust on the scale held within the palm of God’s hand. The palmist implores all men to be still and know who the God of the universe and Creator of the world declares Himself to be: I AM GOD. The Lord of Hosts is the name of the one who has power over all nations and will be exalted in the earth. Man must take note of this truth because all other truths are revealed from this knowledge. He is the refuge and strength of all who seek Him because He is the all-powerful and mighty God of the world. Peace can only be found in the presence of the Lord as men worship Him as the Lord of Hosts. Know who God is. He knows who you are.