The Men Who Buried Jesus 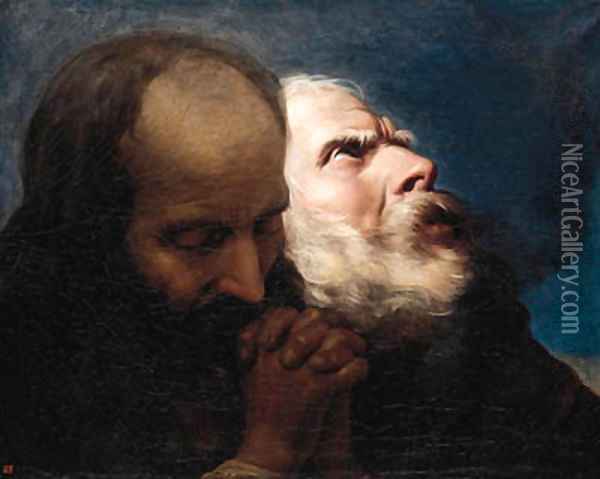 After this, Joseph of Arimathea, being a disciple of Jesus, but secretly, for fear of the Jews, asked Pilate that he might take away the body of Jesus; and Pilate gave him permission. So he came and took the body of Jesus. And Nicodemus, who at first came to Jesus by night, also came, bringing a mixture of myrrh and aloes, about a hundred pounds. Then they took the body of Jesus, and bound it in strips of linen with the spices, as the custom of the Jews is to bury. Now in the place where He was crucified there was a garden, and in the garden a new tomb in which no one had yet been laid. So there they laid Jesus, because of the Jews’ Preparation Day, for the tomb was nearby. (John 19:38-42)

The Men Who Buried Jesus

Faith is not always a clear determination in the heart of the believer. Like leaven, it must grow and infuse itself in the whole of man. For some it takes a long time to become a fervent and devoted spirit of faithfulness. The key to faith is the need to always seek opportunities to grow and become bolder in the exercise of showing trust and confidence. There were two men who stepped forward to bury Jesus and their faith had to grow before they would make that decision. Little is known of the two men but there is a lot of courage in their story. Joseph of Arimathea is unknown except for the brief mention by the gospel writers. He was a man of wealth who had become a disciple of Jesus. Mark tells us that Joseph was a prominent member of the council who himself waited for the kingdom of God. Luke writes that Joseph was a good and just man. At some time in the ministry of Jesus, Joseph had accepted the man from Nazareth was the Christ and became a follower of His teachings. He embraced the life of Jesus but hid his devotion from his fellow council members and friends for fear of being ridiculed or cast out of the synagogue. It seems he had a counsel in Nicodemus because the two of them shared their faith in Jesus and both hid their devotion from others. Nicodemus was a ruler of the Jews and as John references each time came to Jesus by night. His timid devotion to the Christ was measured by his faint-hearted faith to let others know of His belief in Jesus. That would change when the man they were fearful to acknowledge publicly was murdered on a Roman cross.

The news of Jesus death came quickly to the ears of Joseph and Nicodemus. They were part of the ruling party of the Jews and when their fellow council members spoke of the death of Jesus it must have pained their hearts to know they had hidden their faith in Him. Jesus was dead and the Romans had charge of His body. Many of the Jewish leaders were pleased the supposed Christ was dead. The hearts of Joseph and Nicodemus were heavy with grief. Faith began to grow in their hearts as courage moved them to make a bold decision. Joseph went to Pilate and sought permission to remove the body of Jesus. Granted the authority to bury the body Joseph and Nicodemus stepped on the stage of public opinion, ridicule and consternation from their fellow Jews. Going to Golgotha and removing the body was a public show of their faith. Everyone would see these two men taking the body from the Romans. This would not be done in secret or at night but boldly showing their loyalty to the crucified Jesus. Nicodemus ordered a mixture of myrrh and aloes that weighed almost one hundred pounds. The Romans soldiers removed the body of Jesus from the cross and gave Him to these two wealthy, powerful rulers of the Jews. They took the body of Jesus and wrapped it with fine linen with the spices and prepared the body for burial. The Christ would be buried in the tomb Joseph had prepared for himself. There they laid Jesus intending to return on the first day of the week to finish the burial process. As they left the tomb they were no longer afraid to let the world know they believed in Jesus Christ. The story ends there as the Holy Spirit is silent to what became of Joseph and Nicodemus. Fifty days later it would seem fitting to find these two men part of the first converts to the kingdom they looked for but were afraid to acknowledge. Joseph and Nicodemus would have been great examples of faith in the early church.

It took time for Joseph and Nicodemus to find their faith. At first they were afraid and hid their devotion. At the moment of need they stepped into the light of public view and boldly took the body of Jesus to let the world know of their faith. The story of these two men resonates in the lives of all of God’s children to know that faith should never remain the same. It should always be growing from the shadows of weak faith to bold declarations of faith exemplified in the courageous acts of love. There should be a lot of patience in allowing the weak brethren to grow in their faith. God did not cast Joseph and Nicodemus aside because they feared the Jews. Jesus did not rebuke Nicodemus for coming to Him at night because He knew faith had to grow in Nicodemus. The time came when they showed their faith and they left a huge impression on the pages of history. Two men who shared in their fearful faith of yesterday turned their courage into an everlasting story of devotion to their Lord.