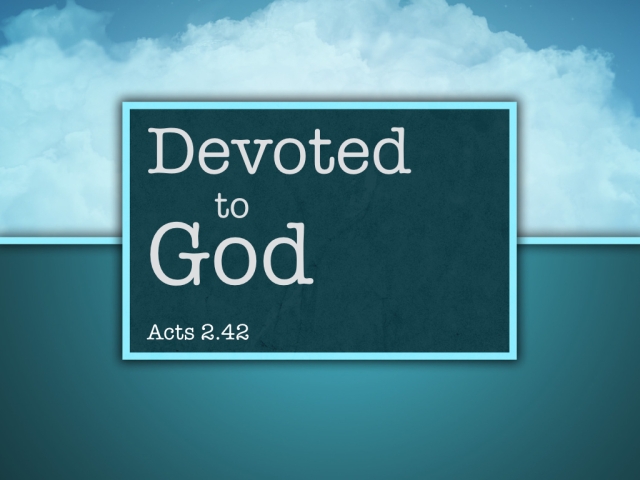 And they continued steadfastly in the apostles’ doctrine and fellowship, in the breaking of bread, and in prayers. (Acts 2:42)

The early church was filled with excitement and anticipation. On the day of Pentecost, three thousand people were baptized into Christ for the remission of sins. These were devout Jews from every nation. With the church in its early stages of development, new Christian’s were learning how salvation was through Christ and the keeping of the Law of Moses was vanishing away. This would become a radical departure from what they had known all their life. What set these first Christian’s apart was the spirit they accepted the new teaching of the apostles. Luke noted the Jews gathered in Jerusalem were devout Jews and when they learned that Jesus was the Christ, they did not diminish their love for truth. Three thousand souls embraced the remission of sins in baptism and they continued to devote themselves to the teaching of the apostles and fellowship.

Devotion is the idea of a steady persistence. To be devoted to something means it continues without stopping. A constant drives the spirit to not give up. The character of determination is the tenacious spirit that nothing will prevent them from doing what they desire to do. This is the kind of spirit the early Christians possessed as they continued with fervency to know as much about the new covenant as they could find. Their fresh approach drove them to ask questions, study the scriptures, fellowship with other people of God and seek clearer understanding of God’s will for them. They were driven to excel in their knowledge of this new doctrine. Within forty years, the church would spread to every creature under heaven. This could not be done if the first disciples had not devoted themselves to the work of the Lord.

Two thousand years removed from the first day does not dismiss the need of Christian’s having that same fervency and desire for truth. There is a cause that we fight for in the church of Christ and the devil is working hard to dismantle, disrupt and destroy the local congregation. He convinces new converts to be lax in their devotion drawing them back into the world. His methods to discourage and dissuade the hearts of God’s people with materialism, immorality and worry are dwindling the numbers of faithful saints. The church needs devoted people who are setting their hearts on the way, the truth and the life. Like the first Christians, we must devote ourselves to the cause. There is nothing of greater importance than building up the church for the glory of God. Hearts must be set firmly upon the purity of the church. Resolved spirits who are dedicating their lives to the will of God must fill the homes of this land showing the light of Jesus Christ to a world going dark.

Devotion is consecrating the heart to serve the Lord and the church is in desperate need of its members to rekindle the spirit of the first century. Those first members built their faith on what they learned from the teaching of Jesus from the Old Testament. What we have today is the fully revealed word of God as the Old Testament testifies to Jesus Christ and the New Testament glories Him. In so many ways, we have more information available readily available than the first Christians but we do not have their zeal. They did so much with so little and we do so little with so much. The need of devotion will bring the church alive and continue to steer the work of the Lord on the course of saving souls. Let us build like those who built the walls of Jerusalem in fifty-five days in the days of Nehemiah. Let us rise up and build and let us have a devotion to put our hands to the work. Devotion.