Jesus Is The Old Testament 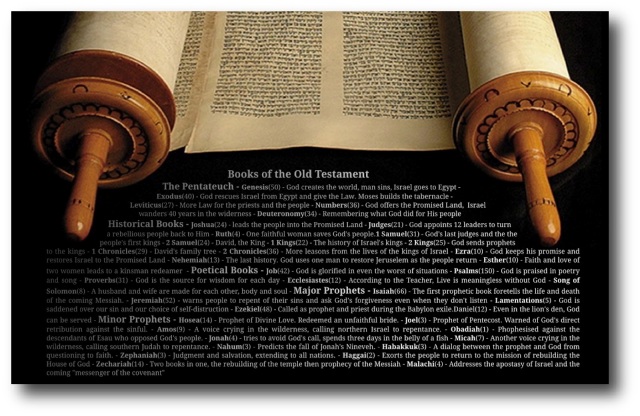 So when they had appointed him a day, many came to him at his lodging, to whom he explained and solemnly testified of the kingdom of God, persuading them concerning Jesus from both the Law of Moses and the Prophets, from morning till evening. And some were persuaded by the things which were spoken, and some disbelieved. So when they did not agree among themselves, they departed after Paul had said one word: “The Holy Spirit spoke rightly through Isaiah the prophet to our fathers, saying, ‘Go to this people and say: “Hearing you will hear, and shall not understand; and seeing you will see, and not perceive; for the hearts of this people have grown dull. Their ears are hard of hearing, and their eyes they have closed, lest they should see with their eyes and hear with their ears, lest they should understand with their hearts and turn, so that I should heal them.” ‘ “Therefore let it be known to you that the salvation of God has been sent to the Gentiles, and they will hear it!” (Acts 28:23-28)

Jesus Is The Old Testament

The story of Jesus is a powerful testimony of the grace of God. Reading the four gospels Matthew, Mark, Luke and John; the life, death and resurrection of God’s Son declares His majesty, glory and honor. The four gospels are the foundations of the teachings of Jesus with the New Testament epistles the applications of His word. Telling the story of Jesus fills the pages of the New Testament. Unknown for many is the reality the Old Testament is as much a testimony of the Son of God as the New. It is remarkable to consider the early disciples teaching the gospel message of salvation using only the Old Testament. Phillip taught a man from Ethiopia about Jesus beginning from the book of Isaiah. It was the conclusion of the eunuch following the teaching of Phillip that baptism was necessary for salvation. All of this came from Isaiah and the books of the Old Testament. Jesus declared the Law of Moses, and the Prophets and the Psalms were about Him and the Jews could have understood who He was if they would have taken the time to search the scriptures. The people of Berea searched the Old Testament proving what Paul was preaching about the gospel was true or not. Luke tells us Paul persuaded many that Jesus was the Christ showing from the Prophets the evidence of his arguments. The kingdom of God can be explained from the Law of Moses and the Prophets as Paul did in his preaching.

A challenge for Bible students is to change the view of Old Testament books to see how Jesus Christ is declared. As the New Testament books were established, the message of salvation became clearer with the teachings of the gospels and early epistles. The Old and New Testament are not two separate divisions but a compliment of the whole message of Jesus Christ. The law of faith through Abraham and the Law of Moses failed because man could not save himself. Jesus took away the curse and became the blood sacrifice. Salvation is not found in the wisdom of man but the sacrifice of Christ. The goodness and severity of the Lord is declared in all the books of the Bible as Jesus Christ is revealed as the sacrificial lamb given for all men. The theme of God’s word is Jesus Christ!

Paul testified of the kingdom of God and persuaded men concerning Jesus Christ – and he did all of this from the Law of Moses and the Prophets. There is no doubt through the inspiration of the Holy Spirit he shared the full story of Jesus life, His teachings, miracles and power of His resurrection. Look at the Old Testament and see where Jesus is found. He is there. Start with Isaiah and preach Jesus. Show the coming of the kingdom of God with the Law and Prophets. Do not leave the Old Testament as just a historical setting of books that do not apply to the church today. They are rich with the story of Jesus. Come to know the Jesus of the Old Testament.

The great principle dominating the composition of Scripture is that of the ascent towards discovery. (Henri Daniel-Rops, What is the Bible? 1958)