It All Belongs To Him 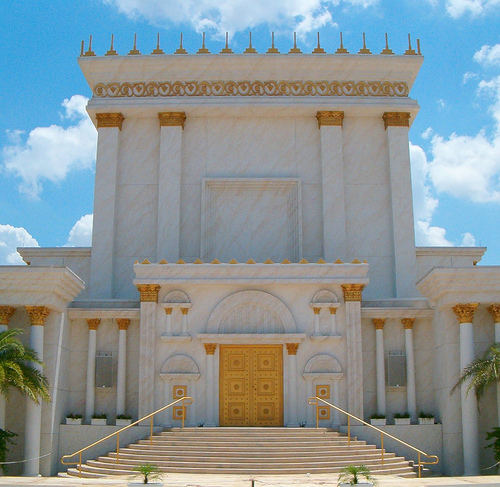 It All Belongs To Him

After the children of Israel returned from the long captivity that saw the burning and destruction of the temple, it was time to rebuild the House of the Lord. By the hand of God, the remnant of His people possessed the land of their forefathers. In their joy of living in the promised land they had forgotten to give God the glory of rebuilding His house. The people lived in paneled houses but the temple of God was in ruins. Haggai and Zechariah implored the people to rebuild the place where the glory of the Lord once ruled. It would be a difficult task but the second temple was completed in 516 B.C.

When the foundation of the second temple was completed, there was great sorrow because it was not like the former glory of Solomon’s temple. A sense of defeat filled the hearts of the people as they compared the glory of the first temple with their feeble efforts in rebuilding the second. Solomon had filled the temple with the wealth of the land with an incomparable presence but the people of Haggai’s day had nothing. How could they restore the temple like that of Solomon when they had no gold, silver or anything? They were poor and had little. The temple would not be the glorious edifice of Solomon’s day. Their hearts were discouraged and downtrodden.

The temple of Solomon was an incredible example of the wealth and splendor of man’s achievement. When the people began building the second temple, a sense of despair filled their hearts. What they forgot is the temple was a place of worship regardless of the outward adorning. The Lord reminded them that while Solomon’s temple was a beautiful edifice adorned with gold – it was the worship that was important to God. Building the second temple would pale in comparison to the first but whether it had gold or silver would not matter to God because He owned all the things of the world. The Lord wanted the hearts of the people, not their gold.

Jesus reminded the woman at the well worship to God has always been about truth and spirit. There is nothing wrong with worshipping in a beautiful building or nicely adorned place but worship is not about the things that God already possesses. All the gold and silver belong to the Lord and He is not impressed. What He desires is the heart of men to honor Him, serve Him, love Him and devote their hearts and wills to Him. Haggai was reminding the people of priorities. The second temple would never rival the first but all the Lord wanted in the temple was the hearts of the people. Men have put so much emphasis upon the outward adorning of pleasure driven worship they have forgotten the real meaning of praising God in spirit and truth. Haggai’s lesson begs the question: what is the purpose of our worship?

Too many church members sit smugly in church on Sunday, some closing their eyes and others eyeing the clothes, and with a dozen other things ahead of God in their lives. (Vance Havner; 1901-1986)