The Supreme Ruler Of The Earth 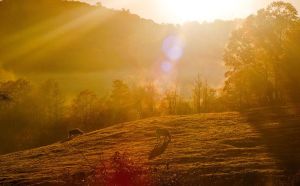 The Mighty One, God the Lord, has spoken and called the earth from the rising of the sun to its going down. Out of Zion, the perfection of beauty, God will shine forth. (Psalm 50:1-2; A Psalm of Asaph)

The Supreme Ruler Of The Earth

Every morning the sun rises on the eastern horizon and sinks beyond the western sky as the day ends. The radiant beams of the sun glow upon all humanity every day without ceasing. From the highest mountains to the lowest valleys, the frigid expanse of north and south and all the seas that cover the world, the sun blankets the earth with the glory of its light. Thousands of years have come and gone and the cycle of the sun continues. With each ray of sunshine filling the world with its glory is the knowledge there is a ruler who reigns over all the earth and the heavens above. His name is the Mighty One. He is God the Lord. There is none like Him. He rules over every molecule of man, every particle of dust and every star that fills the night sky. Creation was by His word and His word alone. He spoke and it came into existence. This same word holds the world together. The Mighty One is the supreme ruler of the earth.

The sun should humble the spirit of man when he considers how massive a star it is. It would take nearly one million earths to fill the mass of the sun. The sun is 10,000 degrees Fahrenheit on the surface and 27 million degrees Fahrenheit at the core. 92,955,807 miles separate the sun from the earth. It is an incredible visage of the creative hand of God. Man must learn God the Lord formed this planetary power source by speaking it into existence and every place the sunbeam of its power reaches earth the Mighty One rules. The absolute ruler of the earth is not man, never will be man and cannot be man – He is God who rules the earth from the rising of the sun to its going down.

Man’s habitation is confined to the world because God has determined his boundaries. The Mighty One has declared His name to all men of every generation. God has placed the breath of life within man creating an eternal being that needs the wisdom of his creator to guide him. When man realizes how powerful God the Lord is he will know the only truth he can follow is the word of God. The Mighty One is the only God and there is none like him. His word reflects the perfection of beauty. The Bible is the spiritual light of His glory explaining where man comes from, why he is here and where he is going. God shines upon all men over the face of the earth.

Nature is incessantly chanting the praises of the Creator, and nothing can be more religious than the hymns chanted in concert with the winds by the oaks of the forest and the reeds of the desert. (Viscount de Chateaubriand, Genius of Christianity, 1856)