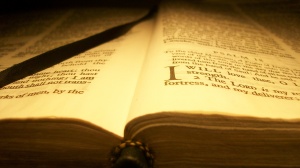 Then the devil took Him up into the holy city, set Him on the pinnacle of the temple, and said to Him, “If You are the Son of God, throw Yourself down. For it is written: ‘He shall give His angels charge over you,’ and, ‘In their hands they shall bear you up, lest you dash your foot against a stone.'” Jesus said to him, “It is written again, ‘You shall not tempt the Lord your God.'” (Matthew 4:5-7)

It will come as a shock to most people to know that Satan is well versed in the word of God. James tells us the demons know and believe that Jesus is the Christ the Son of God. Unlike many today, the demons tremble at the knowledge of Jesus. Failing in his first attempt the tempt Jesus; Satan turns to the authority appealed to by the Lord – the holy word of God. Joseph Hall (1574–1656) said it best: “Satan himself with a Bible under his arm and a text in his mouth.” The text quoted by the devil is Psalm 91. What he conveniently leaves out of the text is the statement “to keep you in all your ways. A. T. Robertson writes, “So the devil quotes the Word of God, misinterprets it, omits a clause, and tries to trip the Son of God by the Word of God.”

Changing the psalm with just a few subtle variations serves the purpose of the devil. The wisdom literature becomes the propaganda of the great deceiver. In the Garden of Eden, the serpent challenged Eve to reconsider what God had told her. Did the Lord really say what she thinks He said? “Has God indeed said” is how the devil begins. He quotes words that Eve remembers but the devil twists the content to mean something very different from what God intended. Satan using God’s words to destroy His creation. He tried the same thing with Jesus.

Two things are clear from Psalm 91: Satan lies are found sprinkled with just enough truth to make those he tempts believe God said it; secondly, the only way to combat the devil is to use scripture properly. Jesus rebuked Satan in the temptation of the flesh with scripture – “It is written.” The deceiver uses scripture the second time but Jesus is aware of the whole truth, not just a portion of the truth. The Lord knows what was left out. He declares to the serpent the whole truth repelling his false argument. What becomes abundantly to the honest student of scripture is the ability of Satan to use God’s word to deceive the hearts of honest people.

Why is the religious world so divided? Everyone believes that one church is as good as another but the belief systems are very different. On any given Sunday a multitude of men and women will stand before large crowds expounding on the word of God proclaiming what they are sharing is the whole truth and nothing but the truth. Thousands upon thousands of souls flock to religious organizations seeking the worship of Jesus Christ carrying their Bibles and singing praises to the One on High. Scriptures will be quoted, exalted, personified, exemplified and applauded with great fervor. Sitting in the midst of the choir singing loudly is the great deceiver grinning from ear to ear because just enough scripture is quoted to make the masses believe what they hear. Satan did not misquote Psalm 91 – much – just a little bit. Like the rat poison of old (made up of 98% corn meal and 2% poison), the devil invites men to feast on the 98% of truth ignoring the little lie he tells leading to eternal death.

Baptism is not necessary for salvation but something good to do. Righteousness is measured by the standards of men for a pattern of goodness. Jesus died for all churches. It does not matter what you believe. God accepts sexuality in any form because God is love. Salvation can be found in a simple sinner’s prayer. Grace alone saves without any works. Being a good person is all one needs to do. Everyone goes to Heaven regardless of how they live. These are just a few of the many lies told by Satan who quotes the word of God as proof. It only takes the omitting of just a few words to make the lie of Satan his own truth.

In divers ways the devil has shown hostility to the truth. At times he has tried to shake it by pretending to defend it. (Tertullian, Against Praxeas, c. 213)