Getting Excited About Jesus 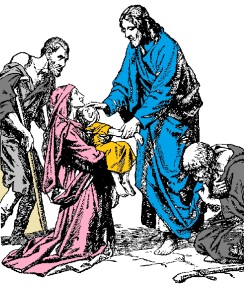 When they had crossed over, they came to the land of Gennesaret and anchored there. And when they came out of the boat, immediately the people recognized Him, ran through that whole surrounding region, and began to carry about on beds those who were sick to wherever they heard He was. Wherever He entered, into villages, cities, or the country, they laid the sick in the marketplaces, and begged Him that they might just touch the hem of His garment. And as many as touched Him were made well. (Mark 6:53-56)

Getting Excited About Jesus

It is hard to imagine the joy when the people heard the great miracle worker had landed on their shores. Physical sickness is a plague sapping the joy of life and creating a world of misery. No one finds happiness in sickness, disease, blindness and during the days of the Jesus the horror of demon possession. Medical advances were very limited in understanding how sickness was transmitted and cures where seldom available. The news of Jesus of Nazareth coming to their villages, cities and country side sent ripples of ecstatic joy among the people as they brought all of their sick and infirmed if only to touch the hem of His garment.

During the short ministry of Jesus thousands of people were healed. The healings were not long ordeals of treatments that are often more difficult than the disease. Cures were given instantly. When a lame man was brought to Jesus and he touched the hem of the Lord’s garment instant strength came to the legs. Blind people immediately received sight without drug treatments. What we understand as cancer today was removed immediately with no radiation or chemotherapy ordeals. Children were healed of many maladies, dead were raised with great power and there was great joy in the land. The people came to Jesus in throngs seeking relief. He gave them what they needed and changed their lives.

All the miracles of Jesus stopped when they nailed Him to a cross. Gone was the power of the Son of God to bring healing to the bodies of those who sought Him. During the ministry of the early church His disciples would show that same power confirming the word of Christ as God’s word. Soon the power of healing diminished and then disappeared from earth. But the power of God remained in the words of Jesus. There was joy in the heart of the Lord when He took a man who had suffered many years with an infirmity and He took that pain away. Jesus could see in the eyes of the healed man inexpressible joy. The greatest joy and the reason that Jesus came was when a woman who was an outcast among men learned she was talking with the Messiah she believed and helped others come to know the Lord. Truth was the healing power Jesus came to bring men. His word remains powerful today healing men of the disease of sin.

The contrast with the people coming to Jesus for physical healing and the healing of men today is the disease. It is easy to see a blind man’s need. He wants to see. What is more difficult is to recognize spiritual blindness and a greater need of healing to simply gaining physical sight. All men need to come to Jesus for healing from sin. The consequence of sin is greater than any physical ailment. What is lacking among the multitudes is the joy found that day Jesus arrived on the coast. Is there joy at the message of healing from sin? It was probable there were physically sick people in the days of Jesus that did not know they were sick. Many are those today that do not realize they are sick with sin.

The story today is not about the people that were sick but those who brought the sick to Jesus. They knew their loved ones were sick and they knew only Jesus could heal them. Until we get excited about Jesus and His healing power we will not be bringing lost souls to Him for comfort. Our task is to bring the spiritually infirmed to the message of Jesus Christ because like in the days long ago only the Son of God can take away sin. Let us be people of faith that will be willing to bring our friends and neighbors to Christ to be healed. There are many sick. There is only one cure. Those who are sick need one of us to bring them. Be excited about the healing power of Jesus.

He came to save us, not from poverty or from ignorance or from the ghetto, but from our sins. Sin must be dealt with first. (Vance Havner; 1901-1986)