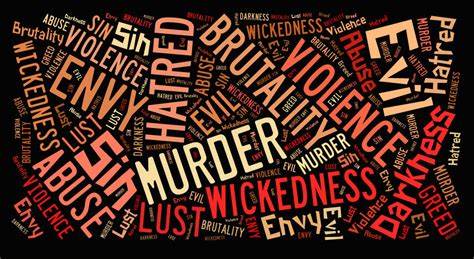 But know this, that in the last days perilous times will come: For men will be lovers of themselves, lovers of money, boasters, proud, blasphemers, disobedient to parents, unthankful, unholy, unloving, unforgiving, slanderers, without self-control, brutal, despisers of good, traitors, headstrong, haughty, lovers of pleasure rather than lovers of God, having a form of godliness but denying its power. And from such people turn away! (2 Timothy 3:1-5)

When the world turns itself on its head and things seem to spiral out of control, voices are raised in alarm at the signs the end of times are nearing. The consciousness of morality degrades as society sinks into more wickedness with the acceptance of sin and immorality as the norm and people begin to fear the world is coming to its fiery end. There is coming a day when the Lord will return and the universe will be obliterated from existence and when that time comes is secured in the mind of God. No man knows when that day will be. Like a thief in the night, the end of the human race will cease in a sudden and instantaneous moment. No warning. No heeding impending doom. Not a sign in the world that God is coming.

Paul’s final letter to Timothy is a plea from the aged apostle to exhort the evangelist to hold fast to the truth of God. He will be facing great trials as the world will bring heavy persecution against the body of Christ. Paul also tells Timothy that in the last days it will be difficult times as the world becomes very wicked. He does not suggest this is a new problem. What Paul describes happening in the last days is something that has been going on since the first days. As society becomes more carnal in thinking and turns more and more to the wiles of the devil, some believe the world has become more wicked than before. In fact, what Paul describes has been around since the post-Eden days. The world has always been wicked since man was removed from the paradise of Eden. In the days of Noah, the world became so vile it was destroyed by God. Throughout the generations of the human struggle, there have been greater times of wickedness than others but the fact remains sin is common.

There are nineteen examples of the sinful nature of men. Heading the list is the most evident sin where men worship themselves and their possessions. Everything in life is about them as they live a shallow and meaningless life. Going for all the gusto, the hearts of men love only themselves and their money with no regard for God. All their life is spent in carnal pursuits and then they die. In life, they boast of their power, wisdom, riches, and arrogance. How often the voice of men cry out they fear no man and deny there is a God. But like all men, they die and their human achievements are lost in the dust of time. Pride exalts the heart of man and death awakens a soul now humbled in the presence of the Almighty. Men will blaspheme the name of God and then proclaim His glory in eternity.

Perilous times are filled with calamity. Families are destroyed by rebellious children who abuse their parents. There is no thankfulness in the heart for anything. Pursuing unholy lives without love, forgiveness, and slandering anyone who stands in their way, the proud man goes through life as a self-centered egotist who worships himself as his own god. They are brutal and cruel in their life. There is no good in them as they push their way through life demanding their rights and their privileges. The only person that matters is what they want and all the world must bow down to their wishes or suffer the consequences. If they have to betray their friends to rise to the top of the human heap they expend any who oppose them. Reckless and motivated by pride, the cargo of carnal desires fuels the spirit of men who love pleasure above all things. Some will act religious but in their hearts squirm in the blackness of despair with the unholy offspring of sin their guiding light. These things will come about in the last days because this is the way the plight of humanity has always been.

The days in which we live can be viewed as dark and troublesome. Changes take place in every generation that shock and dismay the passing generation but there is nothing new under the sun. What has been will be again and what is now has been before. Sin has not changed from the moment Satan whispered in the ear of Eve. However long the Lord allows the earth to stand, the mass of humanity will plunge into the deep crevasses of ungodliness with great vigor. What they fail to recognize is that death comes to all and that in death all come to realize there is a God in Heaven. And that has not changed since before the world was made.