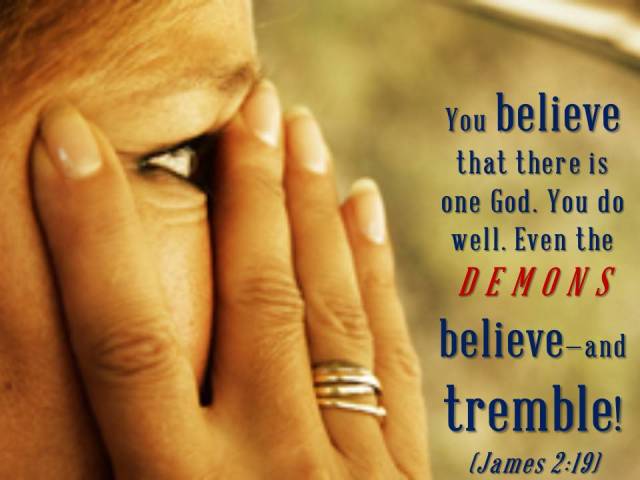 You believe that there is one God. You do well. Even the demons believe—and tremble! (James 2:19)

Faith comes in many forms. The salvation of man is founded upon the measure of belief he has in the word of God. Faith alone can never save a man because there must be a manifestation of faith coupled with fear as man responds to the will of God. This is clearly seen in the story of Noah and the destruction of all humanity by the flood. God’s grace made known to the son of Lamech the impending doom of the world and what must be done to be saved. Noah found grace in the eyes of the Lord and believed the word of the Lord to be true. The grace of God alone did not save Noah as he was told to build an ark for the saving of his household. Moving with godly fear, Noah did exactly what God told him in the manner outlined by the grace of the Lord. His belief was expressed through his fear of the wrath of God upon the sons of disobedience. Noah and his family were saved from the flood by the grace of God, their faith in the word of God and understanding the terror or fear of the Lord.

The epistle of James is a book of practical Christian living. James makes a strong argument that a child of God that does not show their faith by their works is judged by the whole law and condemned. Faith alone cannot save and must be justified by works. Arguing for the effectual working of faith to be manifest by works, the writer uses an unusual illustration to drive his point to the heart of the matter. As in all generations, the danger of speculative faith is a common malady that on the one hand gives a veneer of false security through faith but has no effect on the heart. If a man says he believes in God he has done nothing more than what the demons of the abyss have done. Evil spirits do not deny Christ because they know of a certainty He is the Son of God. Throughout the ministry of the Son of God, the demons acknowledged Jesus as the Son of the Most High God. What makes the demons more credible than men is they believe in God and tremble; most men believe in God and never shutter.

Finding obedient faith is having a belief that will lead to a change in life and bring about a holy life. Religion can easily be viewed through the lens of complacency by acknowledging that God is real but making no effort to mold their life into His image. Demons believe and tremble. Every man on the face of the earth must believe and tremble at the word of God or what good has the word? Failing to fear God comes from the mistaken idea that man and God are equal. The pride of the human heart accepts a false notion of equality leading to the exaltation of the word of man over the word of God. That is why there are so many churches in the world today. Men claim they believe in God but do not tremble.

Faith leading to fear is not a hypothetical belief but a vivacious and productive belief. It changes the heart. Fearful belief is a vibrant and exciting faith seeking to mold the character of a man’s heart into the image of Jesus Christ. There is a deep respect for the holiness of God and the imperative nature of His word. On the one hand, the knowledge of judgment permeates the soul as a fearful expectation but the love of God overshadows the heart with the grace of God. Fearing God is respecting who He is. The demons believe but are unwilling to honor God. If a man believes that God is and will not submit to His rule, he dishonors God. Fear without works is dead and faith without trembling is dead.