Why The Man Of God Was Killed 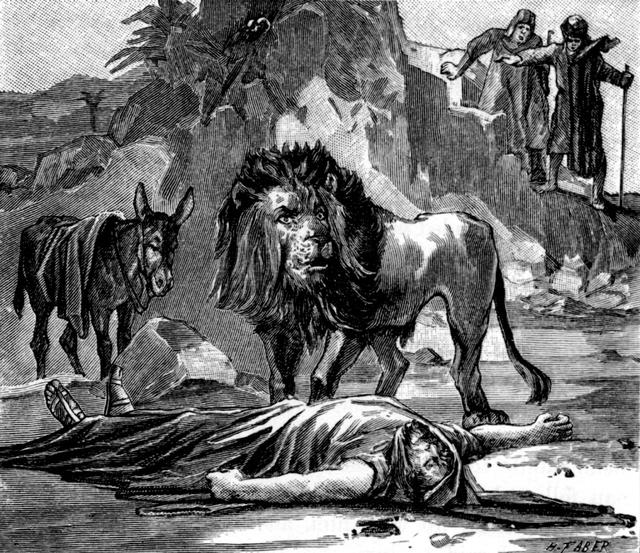 And behold, a man of God went from Judah to Bethel by the word of the Lord, and Jeroboam stood by the altar to burn incense. Then he cried out against the altar by the word of the Lord, and said, “O altar, altar! Thus says the Lord: ‘Behold, a child, Josiah by name, shall be born to the house of David; and on you he shall sacrifice the priests of the high places who burn incense on you, and men’s bones shall be burned on you.’” And he gave a sign the same day, saying, “This is the sign which the Lord has spoken: Surely the altar shall split apart, and the ashes on it shall be poured out.”

So it came to pass when King Jeroboam heard the saying of the man of God, who cried out against the altar in Bethel, that he stretched out his hand from the altar, saying, “Arrest him!” Then his hand, which he stretched out toward him, withered, so that he could not pull it back to himself. The altar also was split apart, and the ashes poured out from the altar, according to the sign which the man of God had given by the word of the Lord.

Then the king answered and said to the man of God, “Please entreat the favor of the Lord your God, and pray for me, that my hand may be restored to me.” So the man of God entreated the Lord, and the king’s hand was restored to him and became as before. Then the king said to the man of God, “Come home with me and refresh yourself, and I will give you a reward.” But the man of God said to the king, “If you were to give me half your house, I would not go in with you; nor would I eat bread nor drink water in this place. For so it was commanded me by the word of the Lord, saying, ‘You shall not eat bread, nor drink water, nor return by the same way you came.’” So he went another way and did not return by the way he came to Bethel.

Now an old prophet dwelt in Bethel, and his sons came and told him all the works that the man of God had done that day in Bethel; they also told their father the words which he had spoken to the king. And their father said to them, “Which way did he go?” For his sons had seen which way the man of God went who came from Judah. Then he said to his sons, “Saddle the donkey for me.” So they saddled the donkey for him; and he rode on it, and went after the man of God, and found him sitting under an oak. Then he said to him, “Are you the man of God who came from Judah?” And he said, “I am.” Then he said to him, “Come home with me and eat bread.” And he said, “I cannot return with you nor go in with you; neither can I eat bread nor drink water with you in this place. For I have been told by the word of the Lord, ‘You shall not eat bread nor drink water there, nor return by going the way you came.’ ” He said to him, “I too am a prophet as you are, and an angel spoke to me by the word of the Lord, saying, ‘Bring him back with you to your house, that he may eat bread and drink water.’” (He was lying to him.) So he went back with him, and ate bread in his house, and drank water.

Now it happened, as they sat at the table, that the word of the Lord came to the prophet who had brought him back; and he cried out to the man of God who came from Judah, saying, “Thus says the Lord: ‘Because you have disobeyed the word of the Lord, and have not kept the commandment which the Lord your God commanded you, but you came back, ate bread, and drank water in the place of which the Lord said to you, “Eat no bread and drink no water,” your corpse shall not come to the tomb of your fathers.’”

So it was after he had eaten bread and after he had drunk, that he saddled the donkey for him, the prophet whom he had brought back. When he was gone, a lion met him on the road and killed him. And his corpse was thrown on the road, and the donkey stood by it. The lion also stood by the corpse. And there, men passed by and saw the corpse thrown on the road, and the lion standing by the corpse. Then they went and told it in the city where the old prophet dwelt. Now when the prophet who had brought him back from the way heard it, he said, “It is the man of God who was disobedient to the word of the Lord. Therefore the Lord has delivered him to the lion, which has torn him and killed him, according to the word of the Lord which He spoke to him.” (1 Kings 13:1-26)

Why The Man Of God Was Killed

The commandments of the Lord are not burdensome. No command given to man is impossible to obey and God has never asked of any man more than he can do. Adam and Eve were told not to eat of the forbidden fruit but they disobeyed the word of God. The world of Noah rejected the counsel of the Lord and died in the flood as a consequence of their rebellion. When Moses instructed the Hebrews on the law of God, he declared that disobedience would be met with the severe penalty of God’s wrath. The history of Israel is a testimony to the rebellious heart of humanity and God’s punishment on those who trifle with His word.

During the divided kingdom when Jeroboam ruled over the northern tribes, a man of God visited the king to warn him of his rebellion to the will of the Lord. Jeroboam had set up golden calves in Bethel and Dan for the people to worship. On a day when Jeroboam was in Bethel burning incense before the golden calf, an unknown man of God approached the king warning him of the doom of those who follow idolatrous worship. Jeroboam tried to have the man arrested by was cursed with a shrunken hand. Pleading for mercy, the man of God entreated the Lord and the king’s hand was restored. Jeroboam asked the man of God to join him at the palace for something to eat and the king would give him a gift. The man of God replied that he had been forbidden to eat or drink anything in the place and was to return to Judah differently.

Blame can be placed on the old prophet but to what degree? He did not force the man of God to return with him but challenged his understanding of what the Lord had said. The man of God should have told the old prophet that even if an angel from heaven gave any other word than what he had been instructed, he should be accursed. There was one truth and the man of God failed to honor that truth. The men were alike in their duties as prophets but this did not allow one prophet to change the word of God.

There is religious division today with many different churches because so many people have been lied to by those who call themselves followers of Christ and are not. Televangelists, pastors, and religious leaders are leading the multitudes to an eternal slaughter because they, like the old prophet, are weaving webs of lies. There is one truth and that is found in the word of God. The man of God should have remained steadfast to the only truth he knew and he would have lived. God has revealed His will to all men who can read and understand what they must do to be saved. The siren call of apostasy rings loud in the world appealing the senses of the unsuspecting and unaware. Are you listening to another man or are you listening to the voice of God?