The Christian In The Workforce 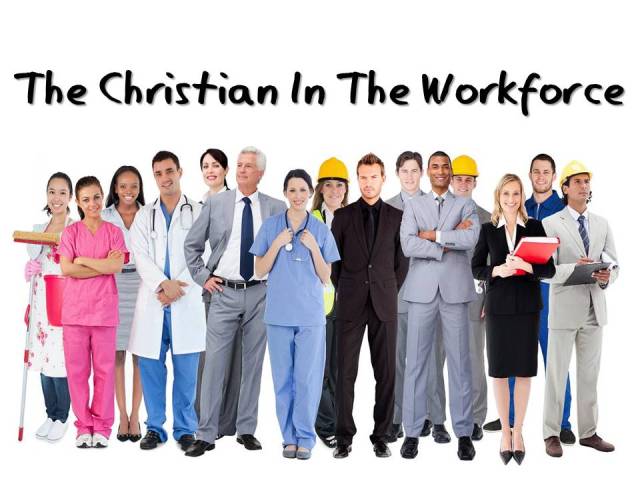 Bondservants, obey in all things your masters according to the flesh, not with eyeservice, as men-pleasers, but in sincerity of heart, fearing God. And whatever you do, do it heartily, as to the Lord and not to men, knowing that from the Lord you will receive the reward of the inheritance; for you serve the Lord Christ. But he who does wrong will be repaid for what he has done, and there is no partiality. Masters, give your bondservants what is just and fair, knowing that you also have a Master in heaven. (Colossians 3:22-4:1)

The Christian In The Workforce

The perilous times of 2020 have seen the impact of the COVID-19 virus on the economic landscape of the world. Few global events have shaped the markets of commerce as a single virus than what has been experienced in a year of unprecedented changes. The year 2020 was foreseen as a year of vision with great expectation the new decade would usher in a thriving hope of prosperity and promise. These dreams have been dashed for many who have experienced compromised health, loss of loved ones, financial ruin, and jobs lost. What seemed to be a year of anticipation is now a time of fear and dread. The political world is in greater chaos and disharmony than at any time in America. Anger and frustration have foamed up in communities around the country with protests, boycotts, and rebellion. The spirit of freedom has unleashed personal choices against one another. These are perilous times.

When God sent His Son to establish the divine kingdom of righteousness, He created a body of people that would stand in contrast to the carnal wisdom of the world. Principles of truth and godliness were transcribed on the pages of inspiration to create a body of people that would stand in contrast to the world. In a remarkable body of teaching the Holy Spirit directed men like the apostle Paul to admonish those who were slaves and masters to act in a manner that was against the norms of society. Slavery was never condemned per se but the character of the slave would change when the grace of God came into his life. The Lord exhorted slaves to be obedient to their masters and not treat them with disrespect, dishonor, or disobedience. Slaves were to seek to please their masters all the time serving sincerely with a reverent fear of the Lord. Whatever the slave was asked to do he would do so with vigor and enthusiasm as if he were visibly working for the Lord. The slave recognized that his true reward came from heaven, not the praise of men. This was not the normal relationship of the slave toward his master.

Masters would be the example of righteousness toward their slaves as just and fair men who knew their own master was the Lord God of Heaven who had no favorites. This changed the dynamics of the master-slave relationship when the master treated the slave with love, joy, peace, longsuffering, kindness, goodness, faithfulness, gentleness, and self-control. Likewise, the Christian slave would reciprocate the same towards their masters. Master and slave knew that with God there was no partiality. The Lord wanted both to honor Him in their lives and to show that honor in the way they treated one another. This would have turned the world upside down in the First Century and this will change the world of today.

Christians shine brighter in times of peril. The character of the child of God is more evident in the days of toil and despair than any other time. In the uncertain days of this year the certain character of the Christian will shine as a light in a dark world. The admonitions of the slave-master relationship correspond to the nature of the employee-employer relationship. If there are any people on the payroll of a company that can be trusted for honesty, fidelity, timeless, and an above-average work ethic, it belongs to the children of God. This a time for the world to see the true nature of righteousness in the lives of God’s people. The Christian must be the model of Jesus Christ in every part of life and this especially holds true in times of uncertainty. Many churches have put on hold evangelistic efforts to reach the lost but Christians in the workplace can show the grace of God by their example of trust and faith in the will of the Lord. The virus of 2020 should not diminish the work of the church when the work of the saint is seen on the job – ready to be an example of righteousness.