Faith Walking On The Water 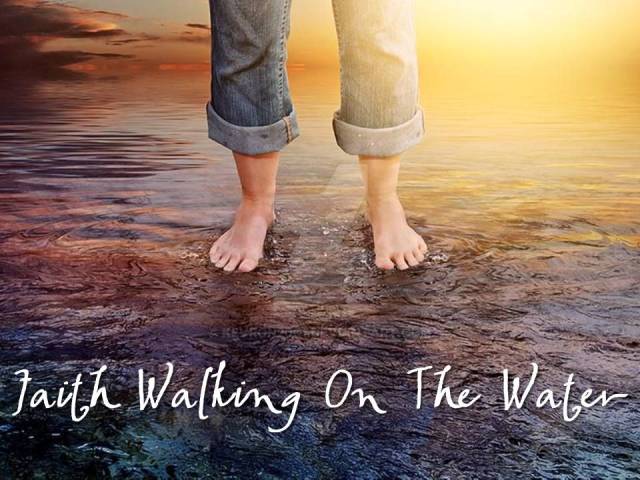 Now in the fourth watch of the night, Jesus went to them, walking on the sea. And when the disciples saw Him walking on the sea, they were troubled, saying, “It is a ghost!” And they cried out for fear. But immediately Jesus spoke to them, saying, “Be of good cheer! It is I; do not be afraid.” And Peter answered Him and said, “Lord, if it is You, command me to come to You on the water.” So He said, “Come.” And when Peter had come down out of the boat, he walked on the water to go to Jesus. But when he saw that the wind was boisterous, he was afraid; and beginning to sink he cried out, saying, “Lord, save me!” And immediately Jesus stretched out His hand and caught him, and said to him, “O you of little faith, why did you doubt?” And when they got into the boat, the wind ceased. (Matthew 14:25-32)

Faith Walking On The Water

Peter was no stranger to challenges. Working alongside his brother, Andrew, Simon was a fisherman like his father. The life of a Galilean fisherman was hard, arduous and at times, dangerous work. Trying to eke out a living on the sea would not make many men rich but it did provide an income to care for a family. The Sea of Galilee was the life bread of Israel as the largest fresh body of water. Less than twenty miles in length, it has served the people of the region for centuries. Jesus traveled on several occasions on and around the sea. Following the feeding of the multitudes numbered more than five thousand, Jesus sends His disciples to the other side of the sea. Sometime between three o’clock and six o’clock in the morning, the Lord approached the ship walking on the water. At first, the disciples were troubled by his appearing but Jesus assured them it was Him and there was nothing to fear. Peter impetuously begged the Lord to allow him to walk on the water and Jesus agreed.

The boat was in a storm characteristic of the sudden burst of winds that would quickly descend from the east bank of the sea. Peter showed great faith to step out of the boat amid the squall and begin walking toward Jesus. It would have been an incredible feeling to walk on the water. The other eleven disciples watched in disbelief at what Peter was doing. No man had ever seen another man walk on water and yet before the eyes of the eleven disciples in the boat, two men were walking towards one another on the water. Everything seemed fine until a change took place. The wind did not die down nor do the waves begin to calm. Jesus was still standing on the water and for the moment Peter was walking on the tops of the waves. It was not until Peter took his eyes off of Jesus and began to realize what was going on around him that fear crept into his heart. When he saw that the wind was boisterous, he was terrified and began to sink. He cried out to the Lord to save him. Immediately Jesus stretched out His hand and caught him. Peter’s faith had waned at the critical moment and doubt destroyed his focus.

The miracle of Jesus and Peter walking on the water testifies to the incredible power of God. Two men walking on the top of the water was done by the finger of God. As long as Peter kept his focus on Jesus, he had nothing to fear. The wind was strong billowing hard against the seasoned fisherman. Water lapped high around Peter as he stepped through the water. At first, there was nothing to fear because Peter was doing what Jesus was doing. The storm did not deter the faith of Peter. All was peace within Peter because while the storm raged around him, he trusted in the power of God. Strong faith is required to believe in the impossible and Peter was doing the impossible. When faith began to weaken and the heart of Peter began to assess the fury of the storm around him, he forgot who was walking on the water first. Jesus came walking on the water to show that nothing on earth should deter the faith of the godly. If the Son of God can walk on water, so can His disciples. It requires faith in the time of storm.

Life is like the Sea of Galilee. It is not very long and often not very deep in its impact on the soul of a person. When storms suddenly appear and life is being tossed about, the last thing that comes to mind is asking Jesus if it is possible to walk on water. Peter could have remained in the boat and Jesus would have joined them. Eleven men did not have the faith to step out of the boat. One man made the bold decision to do the impossible. When Peter kept his eyes on Jesus, he walked on water. Only when he lost sight of Jesus did the brave disciple begin to sink. It would take the hand of Jesus to restore Peter as they walked together to the boat. Security is found in walking on the water with the hand of Jesus.

COVID-19 is quite a tempest on the sea of life as it has disrupted life on so many levels it is difficult to assess the full impact. Needless to say, there are fear, concern, anxiety, and doubts. Sailing the waters of life can be on crystal clear days of bright sunshine or dark stormy nights filled with raging seas and violent winds. Jesus walks on both kinds of water. It was not a miracle that Jesus walked on stormy seas. He could have done that when the sea was calm. Jesus walking on the water was showing that walking through life is done by walking and trusting in the power of God regardless of the storm. Peter walked on the water when he did not fear the storm. Life brings heartache, suffering, and misery. The pandemic of 2020 should be a time to draw a clear focus back to God and remind men that perfect vision is found in Jesus.

As the year 2020 began, many were looking forward to the year as a time of focus and vision towards a greater future. When the impact of the virus will end is hard to say. This is a time to be reminded of how Peter lost his focus and began to sink. There are serious concerns for the virus and every effort must be made to be proactive in guarding against the insidious assault upon our world. During this storm, the saints of God who trust in Him, look to Him for faith, plead to the Father for relief and enjoy a peace that passes understanding will be seen walking on the water. Jesus walked on water so His disciples could walk on water. Have the courage to step out of the boat when others insist they must remain afraid in the boat and walk to Jesus. He will walk with you and you will have no fear. Keep your eyes upon Jesus.