The Binary Nature Of God 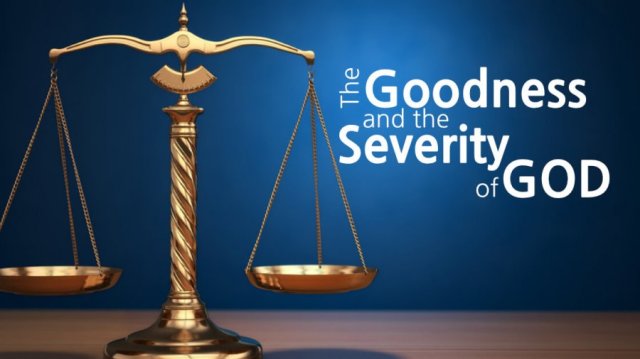 Therefore consider the goodness and severity of God: on those who fell, severity; but toward you, goodness, if you continue in His goodness. Otherwise, you also will be cut off. (Romans 11:22)

The Binary Nature Of God

Aaron Rodgers, the star quarterback for the Green Bay Packers, recently opened up about his belief in religion and the nature of God. He complained he was forced to go to church when young and that religion can be a crutch to make people feel good about themselves. He further stated, “I don’t know how you can believe in a God who wants to condemn most of the planet to a fiery hell. What type of loving, sensitive, omnipresent, omnipotent being wants to condemn his beautiful creation to a fiery hell at the end of all this?” His view is a common perception of God and whether acknowledged or not is believed by most people who reject the idea of organized religion. The question is valid and necessitates an answer but there is a problem with how to answer the question posed by Rodgers. There is an ironic twist to the argument that God is a loving, sensitive, omnipresent, omnipotent being because everything a person can know about God’s character is found in the Bible. This cannot be known by natural revelation or the thumbprint of creation. God has revealed Himself through His hand in forming the world and the vast universe but this can only tell a man there is a higher being at work. To know the character of God watching a sunset will not help. Nothing in the nature of the world explains the personality of the Creator. There is no other book in the world that divulges the minute details of the person of God other than the Bible. The conclusion is that all that is known of God comes from one book and there can be no other source. With that being said, the Bible will either proclaim God to be a loving, kind, compassionate and forgiving God or that He is also a God of wrath.

Everything Aaron Rodgers knows about God comes from the Bible. When a man attacks the nature of God declaring he cannot accept the idea that a loving God would “condemn his beautiful creation to a fiery hell,” what he is saying is that he takes the Bible for what he wants the Bible to say about his life rejecting those parts of the Bible that challenge his own lifestyle. It is a process of character assassination to destroy the credibility of God and thereby allow a man to live as he pleases without fear of contradiction or consequence. Believing that God would not condemn a person to a fiery hell does not change the nature of God no more than believing the world is flat will make the world flat. The Bible is very clear regarding the nature of God’s love, His mercy, and endless grace and the beauty of eternal life. God so loved the world He gave His only begotten Son that whoever believes in Him would not perish but have eternal life. How much more love can a man know from God than that? What is missed in this grand message of love is the idea that some people will “perish.” Jesus says more about hell and eternal torment than anyone else in the Bible. If a man decries the wrath of God as impossible to accept because God said He will send His beautiful creation to a fiery hell then one must also reject Jesus Christ and everything He taught. A man cannot have it both ways. Either God is full of goodness and severity and everything Jesus taught is true or God is a cosmic bully and Jesus Christ is a liar.

Scoffers have laid the groundwork for attacking the word of God since the day Satan whispered in the ear of Eve, “Has God indeed said.” Creating a totem of human wisdom to look like the God of the Bible is nothing more than a paper dragon that has no substance. Rejecting the wrath of God for a more appealing character of love is only an excuse to live outside the bounds of eternal law. When a man says he rejects organized religion he merely wants to create his own. Condemning God as a wrathful God does not change the nature of God. To those who obey Him, the Lord God is a wonderful, compassionate and forgiving Father. Like those who love their children and are willing to chasten them, God is also a God of wrath who will punish those who disobey Him. It becomes abundantly clear from the first pages of the Bible that God is full of goodness and wrath. He loved Adam and Eve but He punished them. The world in the day of Noah was destroyed by the wrath of the Creator but His love spared eight souls. Jesus died on the cross by the hand of those who did not believe God would condemn His beautiful creation to a fiery hell and the incredible power of God raised His Son from the dead to bring hope to a hopeless world. Sadly, most people will reject the teachings of God’s grace; and Jesus is the one who said those words. It was the Son of God who declared on the mountain that few people will be saved. God is binary: He is a God of wrath and He is a God of love. The Bible does not declare God to be only a wrathful God and it does not declare God to be only a loving God. Thank God He is both.