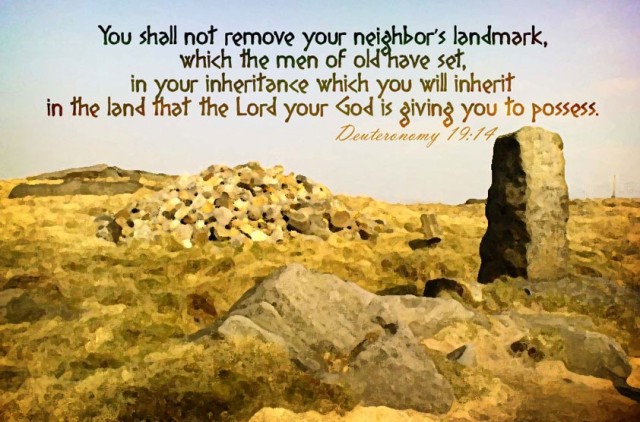 You shall not remove your neighbor’s landmark, which the men of old have set, in your inheritance which you will inherit in the land that the Lord your God is giving you to possess. (Deuteronomy 19:14)

The land of Canaan was a land promised by God to the Hebrews through a covenant with Abraham. After the bondage and cruel treatment by the Egyptians, the Lord delivered the people of Israel and brought them to the land flowing with milk and honey. It was a good land filled with brooks of water, of fountains and springs. The Lord promised land where the houses were full of good things which they did not build, hewn-out wells which they did not dig, vineyards and olive trees which they did not plant. Everything the people received came by the hand of the Lord and only through His power would the land be delivered for them to enjoy. They must never forget the Promised Land was a land promised by God. To this point the Lord tells the people when you arrive in the land the Lord your God is giving you as your special possession, you must never steal anyone’s land by moving the boundary markers your ancestors set up to mark their property. Nothing is too insignificant for God’s notice. Before the extensive use of fences, property boundaries were marked with depressions in the ground, rocks or boulders put in place to show the area of a man’s land or a post that could be easily moved. Honoring the boundaries of a neighbor was an honor system of respecting the rights of a neighbor. This would be an easy temptation to slowly encroach on a neighboring land giving the dishonest man more land. Without records to prove exact boundaries, it would be difficult to plead for recourse. God prohibited (a number of times in the Law) the removal of the boundaries.

It would seem trivial to include in the Law of Moses the prohibition against moving the boundaries of a neighbor but it speaks to the heart of relationships. A dishonest man could easily move a boundary and gain more land but to what advantage? Covetousness was condemned in the Law and emphasized in the Ten Commandments. The reason the Lord forbade men from moving the landmarks came from the promise God made to the people to receive land by His power. When a man moved the boundary he was going against the will of the Lord because God had given the land to the neighbor. All men were equal in the promise of good land. They all received vineyards to enjoy and the blessings of wells filled with water so what would cause a man to steal from his neighbor something given to them by God? Like Ananias and Sapphira in the early days of the church who kept back part of the price of the land for themselves, the heart is filled with covetousness. Even the Romans declared the death penalty for those who removed landmarks. The people of God were expected to not be like the nations around them and steal from one another but to honor the blessings given to them all by the hand of the Lord. Moving a boundary was changing the will of the Lord. The land given to a tribe was identified throughout the generations as unchanging. When the nation of Israel fell into idolatry it was common to steal and rob the poor and to abuse the widows who were defenseless. Sin brought about the disregard for others including stealing land.

It is not as easy to move the landmarks of property in the modern age of surveys, legal descriptions, and laws to protect the rights of land-owners. The law for the Jews was not about moving rocks, posts or filling in depressions of land to steal a little land. It was about respect for God’s law and respect for others. First, it was a law of God forbidding the moving of landmarks. A man could not ignore the law because he did not agree with it. Moving a post just a few feet was a sin because God said so. To disregard plain teaching of God’s law is sin whether it is considered a minor offense or larger. The Bible is not a book of choices but the word of truth of the Divine. When men view the word of God as a law to be changed at the discretion of the whims of human wisdom they find themselves facing a wrathful Lawgiver. Finally, moving a landmark dishonored a neighbor. When God created Adam He saw it was not good for man to be alone. Bringing the woman to the man, the Lord established the fulfillment of companionship that would reach beyond the marital relationship. The community of relationships has been the foundation of society. There are many laws within the Law of Moses that speak to the relationship of the neighbor. In the Ten Commandments, half dealt with the relationship toward a neighbor. When Jesus taught the sermon on the mountain, He established repeatedly the inter-working’s of men with other men as foundational principles of righteousness. The writings of Paul are filled with admonitions of men learning how to treat others. In his letter to Corinth, the apostle rebuked the saints for taking one another to law against another. God says that it matters if you move one stone for dishonest measures against your neighbor.