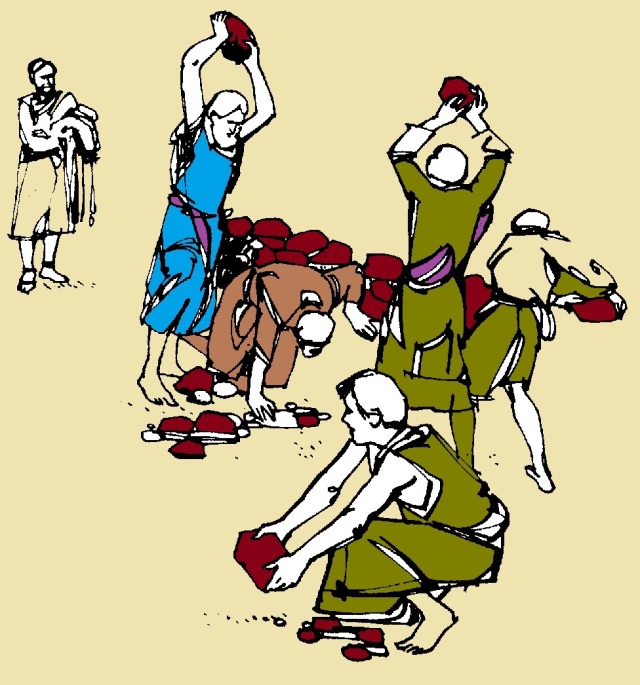 It seems certain the eleven disciples remaining with Jesus in His final hours were not aware that within a short time their Lord would be tried, convicted and crucified on a Roman cross. Jesus had repeatedly told them He would go to Jerusalem and die but there was no urgency in the hearts of the apostles concerning these warnings. They had been with their teacher for a few years and it may have seemed there was much work to be done and that Jesus would be leading them for a long time yet to come. Had they known the full truth of what the Jews would do to Jesus by the power of the Romans, they may have tried to defend Jesus and die in a failed insurrection. Regardless, after the Passover (Judas has left to arrange the betrayal) Jesus walks and talks with the eleven on His way to Gethsemane where He awaits His accusers. The conversation of Jesus is a remarkable testimony to the eternal plan of God and how the death of Jesus was foreordained. He openly tells His disciples what is about to happen and why. Not only will the Lord suffer at the hands of the Jews but the eleven are told of things that will take place in their own lives as disciples of Jesus. As the eleven listen, Jesus tries to reassure them of what was about to happen is the will of the Father and there is much work to be done as the kingdom of God is to be established in Jerusalem. He does not want them to be filled with fear and to know the Father will care for them and protect them. However, He does not leave out the reality that when these eleven men begin preaching the gospel of salvation in a risen Christ, they will be persecuted and reviled and killed. As Jews, the eleven apostles were devoted to the ordinances of the Law of Moses and one of the modern avenues of worship was the synagogue. To be put out of the synagogue was to be deprived of recognition by their fellow brethren. Their character would be impugned; the community would treat them with contempt and in some cases deprived of their earthly possessions. It was a very serious charge to be expelled from the synagogue. All of this would happen to the disciples because they followed Jesus.

To make matters worse, not only would the disciples be cast out of the synagogue, Jesus tells them what whoever kills them will think they are doing a holy service to God. Did the eleven hear what Jesus said about being His disciple? Following Jesus could be a life-threatening decision. Why would anyone kill them for being a disciple of Jesus? The answer would come within a few hours. The eleven were getting a spiritual crash course in what it meant to be a believer in the one God, the one Lord, and the one faith. Jesus would be killed for no reason by men screaming hatred and vile things at the Lord. If the world rose up against a man who never committed any wrong, what would the disciples think would happen to them? The emphasis of Jesus was to let the men know that when they went out teaching the gospel they would be cast out of synagogues and in some cases would be killed by religious zealots. They would first witness this by a man who was not an apostle when the Jews stoned Stephen to death. In time, ten of the eleven men walking with Jesus to Gethsemane would suffer a martyr’s death (as told by tradition; John the only one to die of natural causes). When the time came for them to die, the apostles would remember the words of Jesus spoken on that fatal journey to the garden and then to the cross. They would see the face of the Lord as He confronted His accusers and stood against their false charges. The image of the Son of God on the cross would be emblazoned in their minds as the example of faith resolute to the end and find their own courage to accept death. Jesus did not explain this to disciples at the beginning of His ministry because there was much work to do and He was going to be with them for a while.

Recruitment posters are always measured to give the greatest appeal to those who might consider following a certain cause. Jesus tells His own disciples that if they wanted to follow Him they may have to walk the same path to Golgotha. This would be especially true for the eleven who walked and talked with Jesus, seeing His power through the signs and wonders and listening to the voice of the Son of God expound on heavenly matters. These men were told they were going to be killed for the cause of Christ – and they did not flinch or fall back. Eleven examples of incredible courage came out of that garden that day when the apostles fulfilled the word of Christ by going to Jerusalem and establishing the church of Christ. It would cost them their lives, their friendships, their reputations and many things they held dear in life. They did not falter or fall away from the purpose of their mission. James would be the first of the apostles to die when Herod beheaded him. If tradition is true, nine more would suffer a terrible death. Paul would have his head cut off by the Romans at the behest of the Jews. Many, many more faithful children of God would suffer at the hands of the Jews and the Romans in a martyr’s death. Why? Because they loved the Lord more than the praise of men. What price are you willing to pay for Jesus? Loss of job, relationship, friendship or reputation? Following Jesus Christ requires carrying a cross. In some cases, people will die because of their faith. Are you ready to die?

1 Response to And You Will Be Killed