I Know Your Dwelling Place 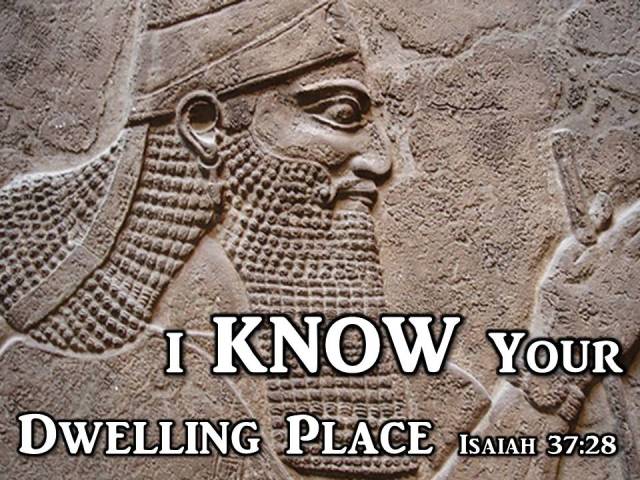 But I know your dwelling place, your going out and your coming in, and your rage against me. Because your rage against me and your tumult have come up to my ears, therefore I will put my hook in your nose and my bridle in your lips, and I will turn you back by the way which you came. (Isaiah 37:28-29)

I Know Your Dwelling Place

Sennacherib was king of Assyria which was the most powerful nation on earth that had crushed the Babylonian kingdom. He entered Israel with an army over 200,000 men devastating the land as he conquered city after city. Hezekiah was king of Judah and attempted to bribe the Assyrian king to retreat but to no avail. While the Egyptians were enlisted to aid the people of God against Sennacherib, they were defeated at Eltekeh. Hope seemed to fade for the people of God as Sennacherib encamped outside Jerusalem fully intent on destroying the city and its inhabitants. Isaiah was a prophet during these turbulent times and reassured Hezekiah that God would deliver him and the people from the wrath of the Assyrians. Things looked very dark as Sennacherib boasted against the Lord God of Israel and there seemed to be no force on earth that would deter his mighty army. King Hezekiah tore his clothes, covered himself with sackcloth and went into the temple to pray for God’s deliverance. Because of his prayer, the Lord told Hezekiah that Sennacherib would be turned back and the holy city of God would be saved. Then the angel of the Lord went out and killed 185,000 of the army of Sennacherib in one night causing the Assyrian king to flee back to Nineveh. About twenty years later the king would be assassinated by his sons. Adam Clarke wrote, “His sons smote him – what an awful punishment of his blasphemy! Who can harden his neck against God, and be successful? God does not lightly pass by blasphemy against himself, his government, his word, his Son, or his people. Let the profligate take care!”

The word of the Lord was very clear against Sennacherib. Isaiah reassured Hezekiah that God was in control and while his faith had waned when seeking the help of the Egyptians; it was the Lord God who would deliver him. Often man fails to see the bigger picture of God’s power and might in the affairs of things trusting more in themselves and the help of others than patiently waiting for the will of the Lord to be accomplished. Sennacherib had brought great destruction to the people of God and stood at the gates of Jerusalem with an incredible army that seemed indestructible. What Hezekiah saw was an impossible task and Isaiah tried to assure the king that all of the impossibilities of men are nothing for the possibilities of God. Hezekiah had tried to bribe the Assyrian king but to no avail. He had sought the help of the Egyptians but they were crushed by Sennacherib. It was not until the king went to God in prayer that the hand of the Lord was opened to defeat the Assyrians. The language of Isaiah to the king was very clear that God was in control and would take care of the Assyrians. God knows the dwelling place of Sennacherib and what he has done, where he is and what his plans are. Nothing happens on planet earth that God is not aware of. Faith should have guided the heart of Hezekiah to know that while an overwhelming army stood at his gate, the God of the universe stood at his heart ready to defend and destroy those who would boast against the divine. The rage of the Assyrians was known by God and He would repay them in full. There was no greater power than the power of God and no nation or army would be able to stand against the will of God. Isaiah reassures Hezekiah there is nothing to fear because God knows everything there is to know about Sennacherib and his army.

It was customary when the invading armies came into the land to carry away the noble captives, hooks would be placed in the nose and lips showcasing them as captives before the people. God uses the same language against Sennacherib to show that God will do the same to the Assyrian king. In one night, 185,000 soldiers died. The hand of the Lord made this possible. Disheartened, Sennacherib fled back to Nineveh never to return. Hezekiah did not do this. It was not a fluke or unknown disease that ravaged the camp. An angel of the Lord smote 185,000 men in one night because God had decreed their deaths.  Because of the rage of the Assyrian king against the Lord God of Israel, he paid the price with a humiliating defeat and his own death years later by the hand of his sons. God never relinquished control. Hezekiah learned that God’s will is always accomplished in His way and in His time. There are many things to fear in life but when one has a prayerful heart like Hezekiah they will see the power of God working in their lives to His glory. The victory over the Assyrians is just a small sample of the many times God has shown His people that He will care for them if they will trust Him. Righteousness will always prevail and overcome evil. God knows the dwelling of all men and will execute His judgment as He sees fit because all things that work in this world are under His hand.