The Gospel Of Christ In Ezekiel 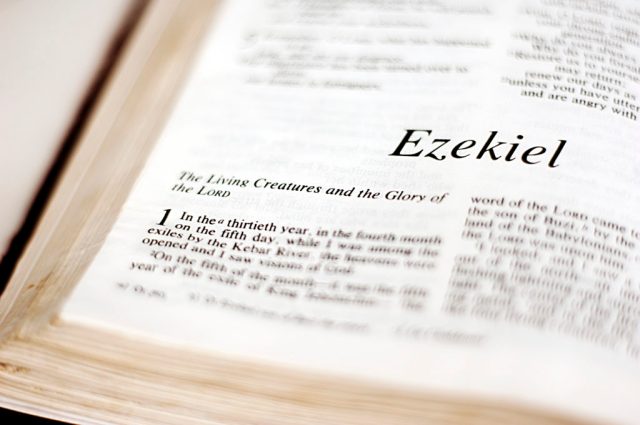 “Therefore I will judge you, O house of Israel, every one according to his ways,” says the Lord God. “Repent, and turn from all your transgressions, so that iniquity will not be your ruin. Cast away from you all the transgressions which you have committed, and get yourselves a new heart and a new spirit. For why should you die, O house of Israel? For I have no pleasure in the death of one who dies,” says the Lord God. “Therefore turn and live!” (Ezekiel 18:30-32)

The Gospel Of Christ In Ezekiel

There is little that has changed when it comes to the relationship of man to God and especially how man comes to God. The covenants have changed over time from a patriarchal law to the covenant established with Israel at Horeb and finally the grace of God in the new testament of Christ. What has not changed is how man comes to God. Israel lived under the curse of the law and through the Law of Moses fulfilled the requirements of God to be found just in His sight. While the law was given only to the Jews and abolished when Christ rose from the dead, the principles of obedience were the same as prescribed to Adam, Moses, David, Elijah and the preaching of the gospel in Christ in the first century.  Ezekiel the prophet is living in the exile with the people of God preaching the same message that Paul the apostle would preach many years later in any city of the Roman Empire. Repentance is the first word of the gospel whether in the time of Ezekiel or the time of Paul. The judgment of God places man at risk. Because of the wrath of God, man must decide to change his life conforming to the will of the Creator or face the fury and displeasure of the Lord. The first thing the heart must do is to be filled with remorse for the rebellion of heart characterizing a sinful nature. Repentance is demanding a change in soul, mind, and spirit turning to the Lord for help. Godly sorrow motivates the heart of man to divest himself of pride and embrace the mercy of a loving God willing to forgive. Without repentance, there can be no forgiveness. To repent is to act upon the reality of what sin has done to the nature of man and God. The people of Israel needed to repent as much as the people of Philippi, Colosse, Rome or Jerusalem in the days of Paul needed to repent. Preaching the gospel of repentance did not begin on the Day of Pentecost. This has been the eternal message since the Garden of Eden.

Ezekiel admonishes the people to repent and turn from their sins to God. The message of repentance is not just a feeling of remorse but an action of the person to change everything about what they have done. Sin will destroy the soul and removing it far from the heart, soul, and mind of the person will show the character of repentance. Repenting of transgressions against God cannot be complete until the sin has been removed, rejected and reviled. This requires all the transgressions be removed. Keeping a few things around to appease the desires of the flesh is not repentance. Turning away from all their transgressions is where God meets the heart of man and forgives. In the case of the Israelite’s, they had to completely remove their desire for idol worship. Many of the kings of the southern kingdom were evil and a few were good but even the good kings would often not completely remove the Baals, Ashtoreth or high places where idolatry was practiced. Repentance requires a complete cleansing. Casting away all the transgressions which you have committed is the language of true repentance. Ezekiel was not preaching a new doctrine. This was true before the Law of Moses and the early church preached the same message of turning away from sin completely to serve the true and living God.

The real key to repentance is when a heart turns away and casts away all the transgressions of rebellion that a new heart and a new spirit are infused in the soul of man. There is no reason to be punished by God when He has offered His grace to allow man back into His fellowship. Repentance is a desire to be a better person and this can only come about when the desire is given to get a new heart. When a person goes to a doctor and finds they have heart disease requiring a transplant, everything is done to move in that direction to preserve life. So it is in the spiritual world to seek a new heart with a new mind to attack sin not allowing it to overcome the soul again and again. Repentance means all efforts are made to change the heart from the transgressive nature of rebellion to the accepting grace of God’s love. A new spirit is the willingness to get rid of anything that will bring harm to the soul again and again. Ezekiel and the prophets preached this message of repentance but the people refused to listen. Some tried to live in both worlds of idolatry and worship of God but that cannot be done. Their hearts were not fully devoted to the Lord and because of this divided loyalty leaned towards the idols instead of righteousness. Repentance demands a new heart and a new spirit to remove the stain of sin. Then, and only then, can one finally say they have repented. The message of Ezekiel is still the message of repentance today. Christ died to bring all men to the Father. Peter’s first words on the Day of Pentecost began with “repent” and that is what they did. Repentance is followed by turning away from sin and creating a new heart and filling a new spirit with the love of God. Repent – turn – create. The gospel of Christ in three words.

1 Response to The Gospel Of Christ In Ezekiel