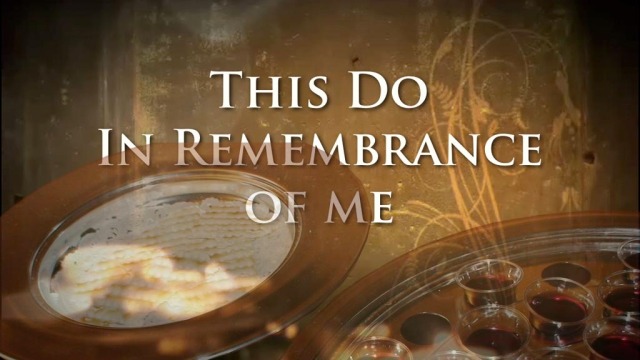 And as they were eating, Jesus took bread, blessed and broke it, and gave it to the disciples and said, “Take, eat; this is My body.” Then He took the cup, and gave thanks, and gave it to them, saying, “Drink from it, all of you. For this is My blood of the new covenant, which is shed for many for the remission of sins. But I say to you, I will not drink of this fruit of the vine from now on until that day when I drink it new with you in My Father’s kingdom.” (Matthew 26:26-29)

There is something powerful in the act of a memorial where time is set aside to reflect, ponder and deeply consider the life of a loved one. Since the beginning of time places have been set aside to bury the dead with markers signifying their burial place so that loved ones can return and commune with the precious memories of lost love, friendships, sacrifices, and family. Often grieving souls will embrace the marble monuments in their deep sorrow for their personal loss. Reminders are placed within the home, conversations turn to the laughter of days gone by and stories told from generation to generation regaling the exploits of previous generations. Sadly, a time will come when these memories fade away and markers that once held great prominence in the lives of many fall prey to the dust of time and fade away to obscurity. The names of past generations hold no meaning and their lives are nothing more than notations in a book with no life story connected and no feelings of relationship. Memorials of men fade in time to insignificance and unimportance. Two thousand years ago a man gathered with eleven disciples and instituted a memorial that has thrived for every generation since and will continue to enliven the hearts and souls of men for generations to come. Jesus Christ gathered His remaining faithful disciples and proclaimed to them a feast that would live without end as a memorial to what He was about to do – sacrifice His life for the agony of all men. In an upper room where the feast of Passover had solemnly been held as it had for generations since the great night of deliverance God bestowed upon the Hebrews, the Lord’s Supper was established.

The early church immediately embraced the memorial of their Savior. Luke tells of how the first Christians learned of the feast of remembrance and it became a solid foundation of the worship in the first century. Every first day of the week the church gathered together as a body of believers to reflect, remember, and ponder the immense love of sacrifice given by Jesus when He took the bread, blessed and broke it, and gave it to His disciples. Jesus knew what was going to happen in the next few hours and He knew His disciples were going to be caught unaware of how sudden He would die. The unleavened bread of the Passover would become the emblem of His body that would be tortured that day for the sins of all men. As a memorial feast, the bread would remind the faithful of how much God loved the world in sending His only begotten Son to die on a cross. Jesus then took the cup of the blood of the grape, and gave thanks, and gave it to His disciples to drink in memorial of the blood of a new covenant. The crucifixion would be overshadowed by the blood of God’s Son being poured out like a lamb to the slaughter. Giving the cup to the disciples, Jesus establishes the blood of a new covenant that would find salvation in His blood through His sacrifice with better promises, a better hope, and a greater High Priest. Remission of sins would not come from the blood of bulls and goats or from the fruitless efforts of men seeking to save themselves. Now the glory of God would surround a table of grace where the blood of Jesus Christ would remind the faithful of God’s love and the love of Jesus to die for all men. The bread and the cup – emblematic of everything man could hope forgiven by a loving Father to an undeserving world who would kill His Son in accordance with His own will.

Years later the apostle Paul would write to a church in Corinth of the powerful message given by Jesus when He instituted the supper. The man from Tarsus was not witnessed to the supper when Jesus met with His disciples in the upper room but the Holy Spirit had revealed to him the impact of that moment on the world. Remembering the sacrifice of Jesus Christ would become a memorial that would not be written on stone, wood or marble but in the hearts of all disciples throughout every generation. The names and memories of loved ones would fade to a distant past but the name and memory of Jesus Christ would be as alive in generations to come as it was in the first century. His story of love and sacrifice would be remembered every first day of the week in every month of every year since the beginning of the church. No memorial has lasted as long and no remembrance has remained in the hearts of men as the feast of God’s love in the Lord’s Supper. In every corner of the globe on the same day of the week, the faithful of God gather to sing, pray and talk about the death of a man on a Roman cross killed for nothing He had done but all He did was for the saving of all men. Jesus gave His disciples a means to come to know Him more in the feast of the supper. Thank God for His great love in sending His Son and thank God each first day of the week when the saints can stop and say thank you for the sacrifice of Jesus Christ.