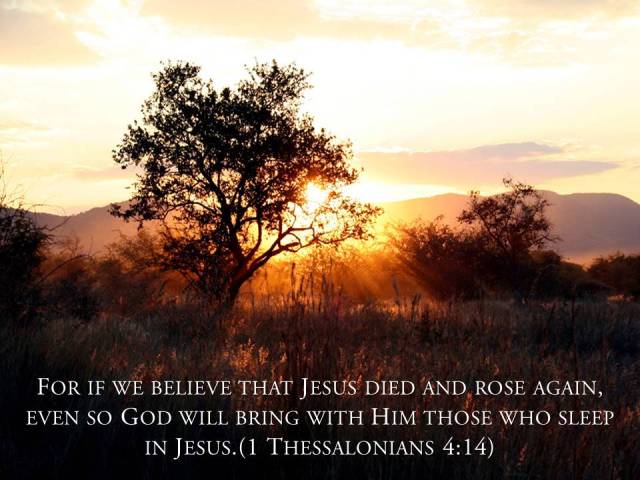 For if we believe that Jesus died and rose again, even so God will bring with Him those who sleep in Jesus. (1 Thessalonians 4:14)

The human body is designed to work with vigor and energy requiring a time of renewal in sleep so that the energies of the body can continue day to day. A person can go for long periods of time without sleep but eventually, the body will demand rest. Without the periods of slumber, the physicality of the human frame will be damaged. Everyone needs sleep regardless of gender, age, nationality or historical reference. Adam and Eve were created with the need for sleep and all those who have followed go through the same cycle of sleep. This part of the body does not depend on whether a person believes in God or not. The ardent atheist and the most fervent believer all find sleep a necessary part of life. While these observations of sleep seem trivial the reality is that Jesus described death as sleep and the apostle Paul exhorts the faithful saints that death is not to be feared but rather to be looked at as nothing more than sleep. While the body requires rest it will eventually die. There are many things that will preserve life for many years but death will overtake all men. Death comes to everyone regardless of gender, age, nationality or historical reference. Adam and Eve died and everyone that followed them dies. Death comes to all men whether they believe in God or not. The man who fervently denies the existence of God will die and the faithful child of God will experience the same fate. What makes this kind of sleep different is what this sleep will mean to the believer in Jesus Christ and what it will mean to those who refuse to obey the gospel of Jesus Christ.

Death has been the common lot of all men since man was refused the tree of life in the Garden of Eden. All the modern conveniences, scientific discoveries and attempts to bring longevity to life will aid in extending the years of life but nothing will change the reality that no one lives on this earth beyond the habitation designed by God. Some have suggested the furthest limits of man’s existence can be as much as 115 years but regardless death will overtake every human being on the face of the earth young or old. Moses records in Genesis that Methuselah lived 969 years but then he died. Sleep is a reminder of the frailty of the human body. It should also teach the soul that one day there will be an eternal sleep. Death and sleep are synonymous because when a person takes a rest in sleep there is a belief that in a few hours they will awaken again. Many believe that death is final and there is nothing beyond death. Lying down to take a nap is a time of refreshing and laying the head down in death is supposed to be a time of renewal. God created man to need sleep so that he can be revived. This principle holds true for the eternal purpose of man who was created to live in the mortal frame for a time and then dies so they may rise in eternal life refreshed, renewed and recreated for the glory of God. Death is nothing more than a small rest so the mortal may put on immortality. To this end, man was created but through the deception of the devil, sin has destroyed the joy of death. There is no joy in death because man has changed the glory of God to the corruptible nature of sin requiring the wrath of God. All men will die and most men will find that death is not a time of refreshing but a time of punishment.

The apostle Paul wanted the Christian’s at Thessalonica to know that death was not to be feared or viewed with dread. If a person believes that Jesus died and rose from the dead, death is nothing more than a momentary sleep when one awakens in Jesus Christ. To be asleep in Jesus is to be in Christ through the obedience of the gospel. In his second letter, Paul will remind the church of the Thessalonians that salvation comes to those who know God and that obey the gospel of Jesus Christ. Having a covenant relationship with God through the blood of Jesus, death becomes a transition from a world of woe, pain, and sorrow to a place of joy, peace, and eternal happiness. When the body is tired and worn down there is a sense of contentment to experience a time of sleep so the soul can be revived and refreshed. Death is a time of revival for the child of God who believes in the power of God to raise the dead and give life to the mortal body. Being asleep in Jesus is to die in the Lord carried by angels to the bosom of Abraham. There can be trepidation of the manner of death and the process of the human body deteriorating but when the final moment of transition takes place in death, Paul says a person sleeps in Jesus. Can you find any better way to describe death? Therefore comfort one another with these words.