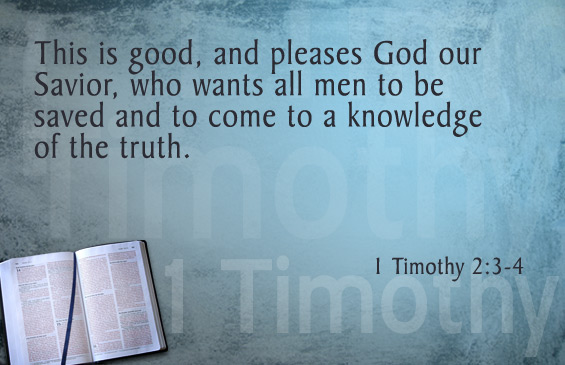 For this is good and acceptable in the sight of God our Savior, who desires all men to be saved and to come to the knowledge of the truth. (1 Timothy 2:3-4)

The love of God is without question when it comes to the nature of man and his relationship with the Creator. God did not create man and leave him on his own. In the Garden of Eden, a plan to redeem man was put in place to return the creation to the Creator. What was lost in Genesis is found again in the Revelation because the Lord had an eternal desire for man to save him and to show him the way of truth and righteousness. It is clear that God does not abide with rebellion. He cast man out of the garden, destroyed the world in the days of Noah and while Israel was the apple of His eye, the Lord brought great destruction upon His own nation. There is no doubt to the wrath of God but this does not negate His love for man. There are two things a man must know about how God feels about him to help him see his own worth and to know the sacrifice the Father gave to show man His love. In the beginning, God desired to dwell with man in the Garden of Eden but man chose to disobey the command of the Lord. There was no choice but to remove man from the garden as a consequence of his sin. This would have grieved the heart of God because of His love for Adam and Eve. True love is measured by the desire to save another and sometimes using means of discipline to exhibit that love. It was for man’s betterment that he learned the grace of God and the penalty for sin. When the Lord destroyed the world there was universal destruction of all humanity because of His wrath but there was a greater sign when God showed Noah and his family grace by telling them what to do to be saved. Through faith, Noah moved with godly fear preparing the ark to save his family. This pleased God and it enriched His heart with His love for man because of the faith of Noah and his family. One of the most intense desires of God is for man to be saved. Yes, there is a place called Hell and it is a dreadful and terrible place prepared for the devil and his angels. God does not desire nor does He wish to punish any of His creation in a place of eternal torment. The love of God has overshadowed the world from the moment Eve took of the forbidden fruit but when a man turns his back on the Lord there can be no other message from a loving God. The Lord desires for man to be saved – no lost.

Grace is not expressed without an understanding of what a man must do to be saved. God’s desire is for all men to be saved and He has given His Son as a testimony of that love. What the Lord yearns for is that all men come to the knowledge of the truth. There is a body of truth that is found in the word of God and when men follow the word of truth they will find the grace of God and knowledge of what to do to be saved. God offers man a way of escape but man must act upon that grace. Belief alone did not save Noah but through the knowledge of what God told Noah to do to find salvation the man of faith saved himself and his family. Noah believed the word of the Lord when he learned all of humanity would be destroyed. He acted upon the knowledge of the truth and built an ark because He knew God desired for him to be saved. The rainbow would become the sign of the covenant expressing the desire of the Father to save His children and the willingness of Noah to believe in those promises and acting in faith to build the ark. God did not lie and eight souls were saved. Without the truth, Noah would have been destroyed will everyone else.

Jesus Christ came to seek and to save those who are lost. All men sin and fall short of the glory of God. The desire of the Father is for everyone to be saved but sadly most have no interest in God, His Son, and His word. While God’s desire is intense to save man it cannot save unless man comes to the knowledge of the truth. It is within the power of God to save all men if He wills but this is not the plan of salvation. Everything man needs to save himself has been revealed by God because of His great love. Coming to a knowledge of the truth is where man exhibits his faith in the word of God to obey the commands of the Father. If a man would have the same desire as God has to save himself – few people would be lost in perdition. The sad tragedy of the world is that for most people God is not important and they care little that He sent His only begotten Son to save them. They live their lives in carnal pursuits of the flesh, mind and worldly treasures finding nothing at the end of life but misery and destruction. Standing before the great I AM in the final day will be even more tragic when they realize too late how much God loved them and desired for them to be saved and how that most men did not come to a knowledge of the truth. God desires for you to be saved. He has given you everything you need to know to find salvation. Two things God desires and He has made every opportunity to show you His love. What are you going to do with the love of God?