Why Jesus Came To Earth 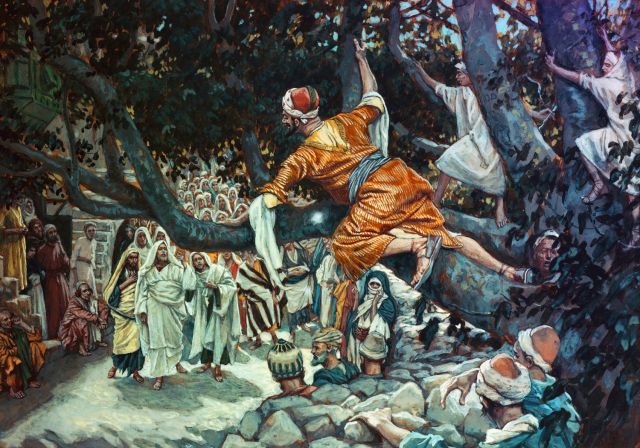 And Jesus said to him, “Today salvation has come to this house since he also is a son of Abraham. For the Son of Man came to seek and to save the lost.” (Luke 19:9-10)

Why Jesus Came To Earth

Zacchaeus was a wee little man but his story is one of the great stories of scripture. As Jesus was passing through Jericho he wanted to see the man from Nazareth he had heard so much about. Zacchaeus was a chief tax collector and very wealthy. In the Jewish world, he was despised as a traitor to the Jewish people for collaborating with the Roman authorities to collect undesired taxes and most often through avarice or cheating the citizens. As a chief tax collector, Zacchaeus would have been viewed with greater hatred. Because of his small stature, he was not able to see Jesus because of the crowd and decided to climb a sycamore tree so he could see Jesus as He walked by. When the Lord came to the place, He called for the tax collector to come down out of the tree as He wanted to stay at the house of Zacchaeus. This excited the tax collector and he hurriedly came down out of the tree and received Jesus into his house. Luke does not record the conversations of Jesus and Zacchaeus but something remarkable happened to the tax collector. He would give half of his goods the poor and if he had taken things dishonestly he would restore it times four. A change of heart took place in this chief tax collector. This seems to be the design of why Jesus wanted to come into his house and the Lord proclaimed glory to God for the salvation that had come to the house of Zacchaeus. Jesus tells all the people His purpose for coming was to seek and save the lost. There are three lessons learned from the story of Zacchaeus.

Jesus came to find the small people of the world. He did not come to find those physically small but those who were burdened with sin. His greater response came from the common man. The Jewish leaders were so filled with prejudices they could not see Jesus as the Son of God. When John the Baptist was imprisoned and sent messengers to Jesus, the Lord told them to tell John the common people were hearing the good news. The scholars and wise men of the world would not be impressed with a man who was born of a poor family in a city of no note in a place where animals were stalled. Jesus was the son of a carpenter and as far as the world was concerned an uneducated man. The common man readily heard the word of Jesus and many disciples followed Him. Jesus came to call all men to the gospel and their status in the world does not give them any greater privileges or influence because of who they are, what positions they hold or their monetary worth. All men are the same before God and He is no respecter of people. It seems the small people of the world have a greater interest and acceptance to the gospel call than those who fill their lives with the wisdom of man.

Jesus came to find the castaway of the world. Zacchaeus was hated by many and viewed as a person of ill repute. The Lord came to find souls regardless of their place in life. He would often spend time with those who were considered the sinners of His world. Everyone needed the gospel of salvation from the king to the peasant; from the rich man to the poorest beggar; and all nations of people regardless of skin color, height, weight, gender or social status. Jesus came to bring salvation to the homes of people like Zacchaeus that would find peace in the love of God. He was a wealthy man who realized his true worth was in the kingdom of God and riches made no difference for him. The world may have viewed him with disdain but he knew that God loved him and that Jesus had come into his home and changed his life. There are many people burdened with great challenges of sin but God loves them also. Paul would describe in his letter to Corinth how that some of them had been fornicators, idolaters, adulterers, homosexuals, sodomites, thieves, covetous, drunkards, revilers and extortioners but they had been washed, sanctified and justified in the name of the Lord Jesus. They found what Zacchaeus experienced in his house – the grace of a loving God.

Jesus came to find the hearts that would turn to the Father. The people complained that Jesus had to be a guest with a man who was a sinner. What they could not see is the fertile ground of a tender heart receptive to the saving grace of God. Whatever Jesus and Zacchaeus talked about is not recorded but one thing that is known is the change of heart that came to that house that day. Zacchaeus was a wealthy man who was now going to become a servant to the poor and an example of fidelity to those he may have cheated. His life changed dramatically because Jesus came into his house. This was not a peripheral feeling of religious pride but a genuine change of heart that would impact all that knew the chief tax collector. Here was a changed man and a fully changed man. When the gospel fills the heart there will be no room for selfishness or pride. Zacchaeus emptied his purse because he had emptied his heart to God. The story is not told but when this chief tax collector died his glory was not in what he left behind but what he found when he climbed into the bosom of Abraham as tall as any man. He found Jesus that day and it changed his life. And that is why Jesus came to earth.