Posted on September 5, 2018 by heatonkent 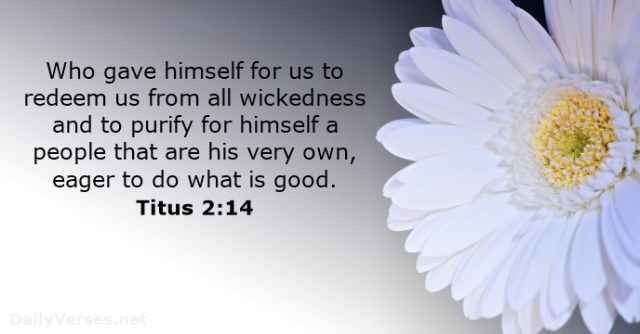 For the grace of God that brings salvation has appeared to all men, teaching us that, denying ungodliness and worldly lusts, we should live soberly, righteously, and godly in the present age, looking for the blessed hope and glorious appearing of our great God and Savior Jesus Christ, who gave Himself for us, that He might redeem us from every lawless deed and purify for Himself His own special people, zealous for good works. (Titus 2:11-14)

Jesus Christ came to save all men from their sins and express to fallen man the love of His Father. His death on the cross was the historical moment in time tying together the beginning of time to an eventual demise of the world. God’s purpose in sending His Son was to open up the avenue of eternal glory where creation could worship the Creator. The theme of the Bible is the redemption of man and the praise of the Lord God who saved man through His grace. Nothing is more fundamental to the life of the Christian than believing that Jesus the Christ is the Son of God and through His blood the forgiveness of sins is granted. Jesus death on the cross came at a price and He paid the ultimate price as an innocent sacrifice. What is central for those who follow Him is that being a disciple of Christ also comes at a price and there is a purpose for the life of glory seen in their lives. Proclaiming oneself to be a Christian requires living a life of godliness, sobriety, and righteousness with expectation of an eternal reward. Professing to be a Christian and living hand in hand with the world denies the kingship of Christ making His sacrifice of no avail to a heart filled with worldly lusts. There is a marked separation of those who profess Christ as Lord. The word of God teaches the disciple of Christ to deny the ungodly lifestyles of the world such as drunkenness, sexual immorality, lying, stealing, anger, hatred and a host of ungodly attitudes and actions characteristic of unbelievers. Jesus gave Himself so that those who followed Him were special people. They live pure lives. Their hearts are filled with love and compassion. Fidelity is their badge of honor. Truth fills their hearts as their tongues speak grace in the ears of hearers. Christians stand out in the world of darkness as special lights of Jesus Christ. He died so that His followers could be special.

Many who profess Christ as Lord deny His authority in their lives as they live with ungodly and worldly lusts still central to their lives. Serving the ideal of Christianity but not accepting the removal of those things that bring harm to the soul is a common problem among many in the church world. The Lord’s church is filled with hearts that serve Him outwardly but inward spirits of carnality measure the actions of the person. People of God are special people and should act, think and be examples of why Jesus died for them. The Son of God gave Himself to redeem His followers from the lawless actions of the world and Christian’s need to stop following the lawless deeds of the world. Being zealous of good works is what separates the child of God from the children of the devil. If the world cannot tell the difference between the two then it is certain the Lord sees the difference. Living soberly is to remove all forms of intoxication and passions from the life of the Christian. Self-restraint is a virtue of godly people. Righteous living is knowing what is right and following the law of God as the rule of life. What is right is right because God said so. Godly living comes from hearts that are seeking the blessing of the Father. Christians should live each day longing for and expecting the coming of Christ. There is an air of expectation in the heart of those who look for the return of God’s Son. All of this speaks to the character of those who are special for Jesus Christ. He died so that His disciples would be His own possession and a peculiar people.

The grace of God has appeared to all men teaching them to change their lives. All those who come to the cross of Jesus must look upon the dying Savior and be changed. Not all who come to the cross will do so and continue to live in a manner that brings shame upon the name of Christ. Paul’s exhortation to Timothy is to teach the principles of separation of those who call themselves Christians to follow a path of purity in serving the purpose Jesus came to earth. Denying ungodliness is to remove those influences of worldly lusts from the heart, the home and the life of the Christian. The Christian is a special person. He is redeemed by the blood of Christ for a special purpose. There must be a marked change in the life of the Christian showing how Jesus has changed the heart to think pure thoughts and live in godliness. A zealous heart for Christ exalts the grace of God in every part of life. Be a special person for Jesus Christ today.