The Challenge of Coming Out 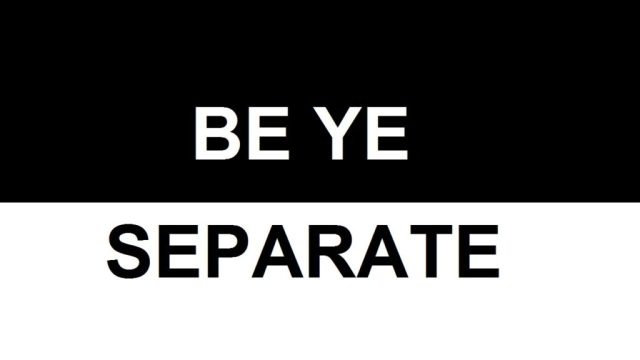 Do not be unequally yoked together with unbelievers. For what fellowship has righteousness with lawlessness? And what communion has light with darkness? And what accord has Christ with Belial? Or what part has a believer with an unbeliever? And what agreement has the temple of God with idols? For you are the temple of the living God. As God has said: “I will dwell in them and walk among them. I will be their God, and they shall be my people.” Therefore “Come out from among them and be separate, says the Lord. Do not touch what is unclean, and I will receive you. I will be a Father to you, and you shall be my sons and daughters, says the Lord Almighty.” (2 Corinthians 6:14-18)

The Challenge Of Coming Out

It is not easy to be different. One of the first needs of a child is to be accepted and be part of a peer group whether family or friends. The identity of self is defined by the relationships that are gendered over time and held in trust by the interaction of life. Friendships develop through the avenue of reciprocal interest and likes bonding the souls together as one. It will not be an easy task to separate those relationships that are common to man. The challenge for the child of God is a matter of allegiance. One of the principles of obedience to God is the need to put first all things godly and to separate the spirit of man from those things contrary to the teachings of the Lord. From the beginning of time God has required first place and first priority from His children. This moved Abram to leave his home of seventy-five years traveling to a place he had no knowledge of and trusting in the providence of the Lord. Joseph aligned himself with the true God in a pagan world and would be rewarded years later with authority in Egypt second only to Pharaoh. Daniel and his friends were forced to live in a heathen land as servants of the conquering king but they refused to defile themselves remaining pure from the pollution’s of the world. Jesus was tempted in all points and through the power of God lived a sinless life free from the defilement’s of a darkened world. The city of Corinth was a wicked and decadent place for anyone to live but especially for a Christian. Paul writes to the saints in Corinth and exhorts them to come out from among the influences of the evil world they lived in and be examples of purity in an impure world. That would be quite a challenge to accomplish but with God’s help it could be done.

The principle of fellowship is to whom the heart is bound. Relationships are built on commonalities and the challenge for the Christian is how far they allow their live to be wrapped up in the affairs of the world. Paul challenges the early disciples to examine whether righteousness should fellowship lawlessness. The two are not compatible with one another and serve a different end. This is not suggesting a person remove himself from the world but rather the interaction of spirit, soul, mind and body with those things that are contrary to the purity of God’s word should be muted. A child of God cannot serve two masters. Using a term of agriculture, the apostle asked a rhetorical question of whether a believer can be yoked to an unbeliever. There is a bonding that happens when one enjoins his life with the other. We may live in the same pasture but we do not need to be yoked to them. The stronger will dominates and when a child of God is yoked in fellowship with an unbeliever it will be the unbeliever that normally will have the stronger influence. Light and darkness do not have communion with one another. Belial is a transliteration of the Hebrew word of worthlessness and applied to Satan. Can anyone imagine Jesus and Satan yoked together? Why should the child of God and the child of Satan be yoked together? The believer and the unbeliever have nothing in common to share as one is saved by grace and the other condemned for rebellion. What agreement would the Temple of God have in allowing statutes of Zeus, Baal, Buddha or any other idol to be placed within its holy walls? The contrast Paul draws is clearly evident and challenging for the Christian to realize the importance of separating themselves from the influences of an ungodly world.

Each person that puts on Christ in obedience becomes a temple of the living God. The Lord dwells in the temples of the heart in each child that loves Him and obeys His word following His precepts and laws. Separation is essential to the character of the Christian to not fellowship the unfruitful works of darkness. God dwells in holy temples of the soul that have removed the trappings of the world from its walls. Paul exhorts the Corinthians to come out from among the darkness of the Corinthian world and stand for Jesus Christ as sons and daughters of the Lord Almighty. This requires action on the part of the child of God to come out and to remove the influences of the world from their lives. Two things are noted in the exhortation: (1) be separate; (2) do not touch. There must first be a removal and then there must be a commitment not to return to the darkness of sin. Coming out from among the world is where God said He will meet with His children and share with them His glory. He will not give that blessing to those who remain in the world of darkness or refuse to come out from among the world. The challenge of coming out is the courage required to make that change in life.