Jesus And The Samaritan 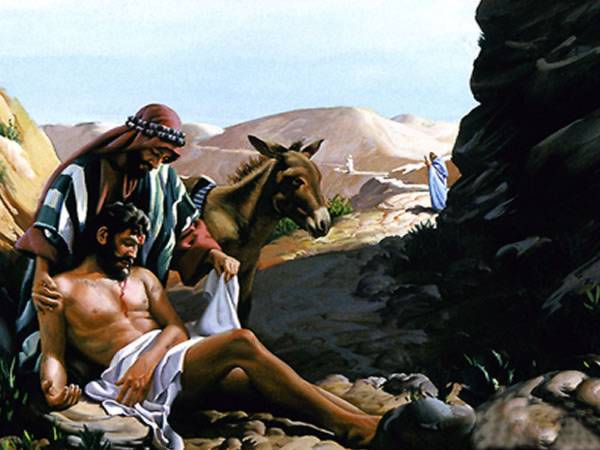 And behold, a certain lawyer stood up and tested Him, saying, “Teacher, what shall I do to inherit eternal life?” He said to him, “What is written in the law? What is your reading of it?” So he answered and said, “‘You shall love the Lord your God with all your heart, with all your soul, with all your strength, and with all your mind,’ and ‘Your neighbor as yourself.'” And He said to him, “You have answered rightly; do this and you will live.” But he, wanting to justify himself, said to Jesus, “And who is my neighbor?” (Luke 10:25-29)

Jesus And The Samaritan

When God created man in the garden it was not good that he should be alone. The Lord created the woman to fill that need but through procreation the fellowship of family and community would usher in a world filled with people. Fundamental to the happiness of mankind was the relationship of one man with another or the community of neighbors. In the beginning all men spoke the same language and formed a similar culture. Following the destruction of the world and all humanity save eight souls, God determined to divide men into national societies that would blend their own language, cultures and personalities with one another. While this dividing would spread man throughout the four corners of the globe, God always wanted the relationship between all men to be that of a neighbor. This would break down the barriers of national distinction bringing the community of the world together as one. Jesus came to earth and gave His life for every man regardless of color, nationality, gender or economic status. The sacrifice of Jesus was for the Jews and the Gentiles, slaves and free, Romans and Egyptians; all men of every nation. During His ministry Jesus had a difficult time teaching His fellow Jewish brethren to love their Samaritan counterparts as one. What made the Jew hate the Samaritan so much was he was a half-breed. During the conquest of the Assyrian Empire on the northern ten tribes of Israel the Gentile Assyrians intermarried with the people of God that created a race of people from Samaria that were part Jew and part Assyrian. This mixing of bloods was an abomination to the puritan senses of the orthodox Jews who demanded a pure line of righteousness. The Law of Moses had forbidden the marrying of Jews to non-Jews but repeatedly the people went after the nations around them. By the time of Jesus the Samaritans were firmly entrenched in the area north of Judah as the mongrel nation despised by the Jews.

A man comes to Jesus seeking to trap the Lord in His teaching. He has carefully studied the law and believes he has a legal entanglement that will entrap Him in his teaching. The lawyer knows if he can make Jesus admit a false representation of the law’s definition of a neighbor he will gain the upper hand on the Lord and find a cause of rebuke. His question is subtle but direct. The question is a leading question and he wants to know what the Lord thinks the law says about eternal life. Jesus is quick to direct the lawyer to the word of God. The Lord does not answer for Himself even though He is the Son of God and has authority from the Father to teach the will of God. He appeals to scripture not His own opinion. “What is written in the law,” is the question Jesus inquires of the lawyer. It would seem the man knows this is the question Jesus will ask and prepares to set his trap. The lawyer explains the law as given by Moses and Jesus does not expound on the answer but commends the man. Now the trap is sprung and the lawyer asked the meaning of the word neighbor. It is then Jesus gives the man a lesson he will never forget about God’s eternal purpose in the relationship of men towards their neighbor.

The story of the good Samaritan is filled with the images of the hypocrisy of the Jews and their disdain for the people of another nation. Robbers take the possessions of an innocent man leaving him for dead. A priest and a Levite pass by with little concern for the injured man. Arriving on the scene is a man of another nation; a man treated like a dog by his Jewish brethren and becomes the hero of the story. A man lies wounded on the road. He is made in the image of God and has been dealt a cruel blow by vicious scoundrels who prey upon the helpless and innocent. Two men who represent the righteousness of God and who should feel indebted to help any man turn a blind eye refusing to help a man in need. They are filled with selfishness and pride that will damn their souls for their disregard for a neighbor. It takes the example of a Samaritan to show the love of one man for another and to teach the lesson of who is the real neighbor. Jesus drives home the point to the lawyer when He asks, “So which of these three do you think was neighbor to him who fell among the thieves?” It was then the heart of the lawyer sank in shame when he knew the only answer that could be given was the Samaritan. The admonition of the Lord was for him to do the same. Jesus reminds all men who the real neighbor is and there should be no doubt of the responsibility given to all men to have regard for one another. The best thing we can do for our neighbor is to teach them to gospel of Jesus Christ. Be a neighbor.