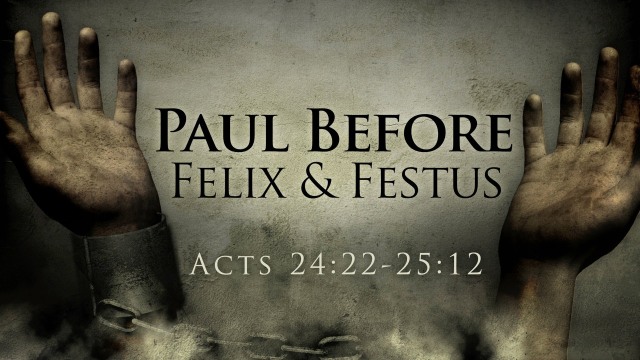 And after some days King Agrippa and Bernice came to Caesarea to greet Festus. When they had been there many days, Festus laid Paul’s case before the king, saying: “There is a certain man left a prisoner by Felix, about whom the chief priests and the elders of the Jews informed me, when I was in Jerusalem, asking for a judgment against him. (Acts 25:13-15)

Paul had enjoyed a respite for two years following the attack by the mob in Jerusalem and his deliverance by Claudius Lysias, commander of the garrison near the temple. Brought to Caesarea, the apostle had stood against the charges leveled against him by the high priests and elders but had been left bound by order of the governor Felix when he was replaced by Porcius Festus. The Jews quickly tried to take advantage of the newly appointed governor pleading with Festus to have Paul brought to Jerusalem to stand trial again. Their plan was to assassinate the apostle on the road from Caesarea. Festus refused their offer and demanded they make their charges at his garrison which they did. Again, no proof was given of any crime Paul had committed. Festus made an offer to Paul to take him to Jerusalem to face his accusers but Paul demanded to be heard by Caesar. As was the law of the Empire, appealing to Caesar became an irrevocable request and Festus set in motion Paul’s journey to Rome. Before Paul was taken to Rome, King Agrippa II visited Festus at his garrison in Caesarea. Some days later Festus laid before the king the problem of Paul and his accusers. Festus knew there was no evidence that Paul committed a crime but appealing to Caesar required the governor to specify the charges against him and Festus had nothing to write. King Agrippa wanted to hear Paul himself and arrangements were made to bring Paul in before a great crowd of nobility and prominent men of the city. Festus hoped that by the king examining Paul he would have something to write concerning the charges against the apostle.

The opportunity to stand before an august audience of kings, governors, Roman commanders and prominent men of the city was an incredible moment in the life of Paul. A chained prisoner stood before the elite of society and his oration was filled with the power and grace of the gospel of Jesus Christ and Him crucified. Paul knew that King Agrippa was very familiar with the customs and questions about the Law of Moses and the Jewish culture. The king’s family was of Idumaean descent with a long history of dealing with the people of Israel. Paul’s sermon was basic in its nature yet powerful in its message. He proclaimed there was ample proof that Jesus was raised from the dead even though the earlier part of his life Paul had persecuted the church. He recounts his seeing the Lord on the road to Damascus and the call of the Lord to be a witness and messenger to Jews and Gentiles alike. Affirming to King Agrippa that he had taken his charge seriously and with great devotion, Paul declared to the Jews and Gentiles that they should repent, turn to God and do works fitting repentance. He explained the persecution of his own people two years before at the temple was why he stood now before the king in chains. His defense was a powerful declaration that the Christ had suffered, rose from the dead and the message of the cross was the apostle’s plea to the Jewish people and to the Gentiles.

Festus was the first to react as he called out to Paul that he had lost his mind. The apostle did not wince as he firmly declared to those gathered his message were words of truth and reason. He then looks at King Agrippa and pleads with him to accept what he knows to be truth and lays before Agrippa the appeal to believe the prophets. The heart of the king is in turmoil as he knows what Paul has presented is true. Whether in derision or true to heart, Agrippa declares that he is almost persuaded to be a Christian. There is nothing more that Paul would desire than to see the king accept the testimony of Jesus Christ and do exactly what the apostle had done many years before in the obedience of baptism. Sadly the king left and would die at the age of seventy years unborn in Christ. Almost but not. Sin had taken a toll on the heart of Agrippa. Bernice was his sister and rumors swirled they shared an incestuous relationship. On that fateful day with the great messenger of God standing before him, King Agrippa refused to allow the truth of the gospel to penetrate his heart. He would always know he had come so close to serving the one true God but squandered his hope on the ruins of carnal desire. Almost being a Christian is being totally lost. There are no almost children of God. Acceptance to the will of the Lord demands a full and complete change of heart to serve God. Anything less is unacceptable.