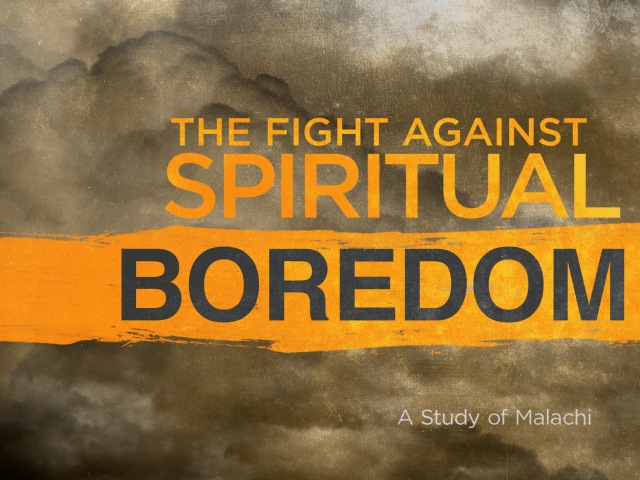 “A son honors his father and a servant his master. If then I am the Father, where is My honor? And if I am a Master, where is My reverence?” says the Lord of hosts to you priests who despise My name. Yet you say, “In what way have we despised Your name?” You offer defiled food on My altar, but say, “In what way have we defiled You?” By saying, “The table of the Lord is contemptible.” And when you offer the blind as a sacrifice, is it not evil? And when you offer the lame and sick, is it not evil? Offer it then to your governor! “Would he be pleased with you? Would he accept you favorably?” says the Lord of hosts. “But now entreat God’s favor, that He may be gracious to us. While this is being done by your hands, will He accept you favorably?” says the Lord of hosts. “Who is there even among you who would shut the doors, so that you would not kindle fire on My altar in vain? I have no pleasure in you,” says the Lord of hosts, “nor will I accept an offering from your hands. For from the rising of the sun, even to its going down, My name shall be great among the Gentiles; in every place incense shall be offered to My name, and a pure offering; for My name shall be great among the nations,” says the Lord of hosts. “But you profane it, in that you say, ‘The table of the Lord is defiled; and its fruit, its food, is contemptible.’ You also say, ‘Oh, what a weariness!’ And you sneer at it,” says the Lord of hosts. “And you bring the stolen, the lame, and the sick; thus you bring an offering! Should I accept this from your hand?” says the Lord. “But cursed be the deceiver who has in his flock a male, and takes a vow, but sacrifices to the Lord what is blemished — for I am a great King,” says the Lord of hosts, “and My name is to be feared among the nations.” (Malachi 1:6-14)

The irony of man’s place in the scheme of God’s creation is that while he is the most intelligent of all the creatures, he is the only one that seems to never learn from the mistakes of the past. There is an innate purpose of man to foil the plans of his creator at every turn. Throughout the history of the people of God, warned against disobedience, punished with the chastening of the Lord; man finds himself at the end of the story struggling to understand his place in true worship. Before the captivity of Judah to the land of Babylon, Amos had warned of a famine that would envelop the land. Not a famine of bread or water but of hearing the words of the Lord. This would come about in a very real sense following the book of Malachi where four hundred years would pass before the light of God’s word would shine upon the world. And how does the story end before this famine? God’s people struggling with religious laxity, dishonoring the Lord by neglect, mixed marriages and apostasy.

There is a real sense the message of Malachi is alive and well in the American church of today. The remarkable lesson from the final book of the Old Testament is a stark testimonial to where many people find themselves in the worship of the Lord. Church services seem to be boring, unrelated to everyday life, unconcerned and disinterested in seeking a higher plane of spiritual awareness. Elders are begging their members to be more enthusiastic about the work of the Lord and preachers plead from the pulpit for the hearts of disciples to be more devoted. It seems almost that we are going through the motions and declaring victory over Satan with the five acts of worship fulfilled and logged on the eternal checklist of God. Church services are such weariness. Where is the devotion to the Father? What happened to the heartfelt love for the sacrifice of Jesus as the fellowship of the table is partaken? Participates sit passively listening to the droning of the message until finally a release is given with the ‘amen.’ More regard is given to business and political leaders than the worship of God.

Malachi’s message must ring close to home. The sad reality in the kingdom of God is the ability of man to corrupt the worship of God as nothing more than a bothersome activity that must be tolerated. The Lord called for someone to shut the doors of the Temple because it would have been better to not have worship than to receive the corrupt sacrifices from hearts filled with the world. The table of the Lord was polluted and the offerings contemptible. Going through the motions was the best the people could do for the Lord and He was not pleased.

The last book of the Old Testament should be the first book we read to remind our hearts how easy it becomes to dishonor the Lord with profane sacrifice. Israel had given up on idolatry but their worship was marred by apathy, weariness, and contempt. It is easy to do and we must be diligent to guard against it. Jesus commanded that worship must be in spirit and truth. Emphasizing one over the other is corrupt worship. Failing to do either one is polluted worship. God is a great King and His name must be honored in our worship. The Lord of Hosts requires true allegiance of hearts that are tuned to His word, His will and His love. Glorify Him with the sacrifices of our lips and the joy of our hearts so that we may offer worship that is pleasing to Him.