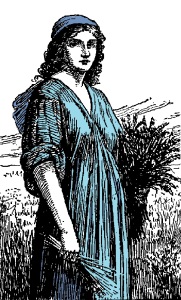 And now, my daughter, do not fear. I will do for you all that you request, for all the people of my town know that you are a virtuous woman. (Ruth 3:11)

The story of Ruth is a love story filled with sadness, devotion and virtuous character. Ruth was not a Jew but a woman of Moab. She and her sister Orpah married the two sons of Elimelech and Naomi from Bethlehem in Judah. Tragically, Elimelech, Mahlon and Chilion all died leaving Naomi and her two daughter-in-law’s in desperate straits. Returning to Judah, Naomi exhorted her daughter-in-law’s to return to their own people but Ruth desired to remain with Naomi. Arriving in Bethlehem, the women found themselves in the fields of a wealthy relative of Elimelech named Boaz. It was at the beginning of barley harvest and Ruth went to the fields to glean after the reapers.

Boaz came from Bethlehem to see about his gleaners and noticed Ruth. He was told she was the Moabite woman who had returned with Naomi. Ruth asked to be allowed to glean the fields and Boaz instructed her to glean no other field but his own. This surprised Ruth and she asked why he was being so gracious. Boaz tells her he has heard all that Ruth has done for Naomi and how she remained with Naomi rather than live with her family in Moab. The character of Ruth preceded her as a woman of virtue.

Near the end of the barley harvest and wheat harvest, Naomi wants to secure a life for Ruth. She instructs her daughter-in-law to find Boaz and after he lies down, uncover his feet and lay down. This was not something untoward but a reminder to Boaz of an obligation of a close relative. The incident seems odd but Naomi knows the character of Boaz and Ruth that no one will be taken advantage of from the other. Following the instruction of Naomi, Ruth lays at the feet of Boaz until he is awakened at midnight. He agrees to fulfill the custom of the close relative. One of the things he tells Ruth is all the people of Bethlehem know that she is a virtuous woman. She is not a Jew but a Moabite. Earlier in the history of Israel, the men had gone after the woman of Moab committing harlotry. Ruth was not the character of the Moabites. She was an “outsider” but her reputation was righteous and pure.

The story ends with the marriage of Boaz and Ruth establishing the lineage of David and eventually Jesus Christ. Among the lessons from the wonderful book of Ruth is the character of a woman from foreign land who was fully devoted to her mother-in-law and whose reputation was evident in her life. Boaz told her the whole city knew she was virtuous woman. This did not happen by chance. As a foreigner and especially a Moabite, Ruth would have been expected to be a woman of dark character. She stood out for all of the women. Solomon posed the question, “Who can find a virtuous wife, her worth is far above rubies.” Ruth was a jewel in the crown of righteousness among women.

Outward beauty is not what is praised in the eyes of God. Charm is a deceitful attraction. The true character of a woman is a view of virtuous character. A woman of excellence is a person of inward beauty who is chaste, modest and filled with the goodness of the Lord. Ruth was such a person. Mothers should model their daughters after the character of Ruth. Wives can find a pleasant image of beauty when they examine the life of the Moabite woman. Boaz knew that. And so did God. Now that is a great story.

No beauty leaves such an impression, strikes so deep, or links the souls of men closer than virtue. (Robert Burton, Anatomy of Melancholy, II, 1621)