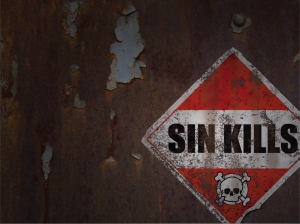 When he entered his house he took a knife, laid hold of his concubine, and divided her into twelve pieces, limb by limb, and sent her throughout all the territory of Israel. And so it was that all who saw it said, “No such deed has been done or seen from the day that the children of Israel came up from the land of Egypt until this day. Consider it, confer, and speak up!” (Judges 19:29-30)

The Bible is filled with remarkable stories. There are few that can live up to the story of the Levite and his concubine. During the final days of the judges, there was no king in the land and everyone did as they pleased. Samson has died and Samuel will appear on the scene in years to come. It was a lawless time for Israel and evil began to abound. A certain Levite had a concubine traveling through the land of Benjamin. Jerusalem had not been subdued yet as it was still a foreign town (called Jebus). Desiring not to stay in the city of foreigners, the Levite chose to stay in the Benjamite city of Gibeah. No one gave them a place to stay until finally an old man who had been working in the fields came into the city and gave them board. While they were dining, certain men came to the house and demanded the Levite be brought out so they could rape the man. The old man refused the request but finally the Levite gave the men his concubine. All night long, the perverted men of Gibeah raped the woman. When morning came, they let the woman go and she crawled back to the place where the old man lived. Her last dying act was to fall before the door and place her hand on the threshold.

When the Levite found his concubine, he took her home, cut her up and sent her body parts to all the tribes of Israel. It was a declaration of the wickedness the men of Gibeah and a demand for justice to be meted out for such a crime. The eleven tribes of Israel were incensed at the cruelty of the men of Gibeah. Drawing an army of 400,000 the decision was made to demand recompense from the tribe of Benjamin to deliver the evil men for justice under the Law. Benjamin refused. Instead, they gathered an army of 26,700 and a civil war began between Benjamin and their Israelite brothers. When it was all said and done, more than 65,000 men were dead. And for what? The men of Gibeah were destroyed along with the inhabitants. After the people buried their dead, what was gained? Nothing. Nobody won.

Sin brings misery, death, hatred, perversion and no one wins. From the first taking of the fruit in the garden to the final day of existence when the trumpet will sound, sin will strike down the multitudes of those who believe there is something to be gained. What was gained by Eve taking the fruit? Nothing. Satan is the father of lies, he is the liar of all liars, the great deceiver and the one who whispers in the ear that sin will bring great happiness and joy and it never happens – understand clearly – it never happens! For a moments reckless folly the joy expected from the fruits of sin turns putrid and vile. No one wins when they sin. It never brings joy. There will never be happiness. Death is covered with the delights of temptation. Its poison is masked by the aroma of sweetness. Horror is the only thing you will find at the end of sin’s dark tunnel.

Jesus Christ came to give life and to give it abundantly. There is only one happiness and that joy is found in the cleansing blood of His grace. He conquered sin so that we will no longer be slaves of the wiles of Satan. The devil has been defeated. He has no power but only what we allow him to have in our life. Renounce the presence of sin in your life for the death it brings. You will not win with sin. Victory is found only in Jesus Christ who destroyed the sting of death.

There was a time when sin shocked us. But as the brainwashing progresses, what once amazed us only amuses us. We laugh at the shady joke; tragedy becomes comedy; we learn to speak the language of Vanity Fair. (Vance Havner; 1901-1986)