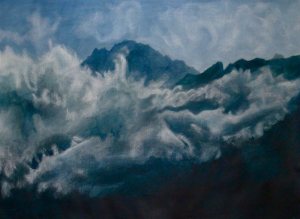 Come, and let us return to the Lord; for He has torn, but He will heal us; He has stricken, but He will bind us up. After two days He will revive us; on the third day He will raise us up, that we may live in His sight. Let us know, let us pursue the knowledge of the Lord. His going forth is established as the morning; He will come to us like the rain, like the latter and former rain to the earth. O Ephraim, what shall I do to you? O Judah, what shall I do to you? For your faithfulness is like a morning cloud, and like the early dew it goes away. Therefore I have hewn them by the prophets, I have slain them by the words of My mouth; and your judgments are like light that goes forth. For I desire mercy and not sacrifice, and the knowledge of God more than burnt offerings” (Hosea 6:1-6).

Man is a fickle creature. Imbedded in all of us is the ability to be devoted and consecrated people to a purpose or cause. Athletes excel in their sport spending incredible hours training. Scholars exhaust hours upon hours of study to gain a level of expertise in a desired field. Heroes are found in the most unlikely places from a spirit of courageous resolve. Stories of survival are inscribed upon the pages of inspiration for the endurance of the human spirit. With all of this deep rooted resolution of the nature of man he finds so often the inability to keep faith in the Creator.

Hosea, a prophet of God, lived in perilous times. The kingdom was experiencing the upheavals of kings who were evil being warned of God impending doom lest they repent. There were times of plenty and times of famine. Revival found its home for a short time but sin triumphed over the people as they turned away from the Lord God. The people are lying, cheating, stealing, killing, and committing adultery failing to hear Hosea’s plea of change. The prophet goes to the root of the problem for as a people of God their faith was likened to a “morning cloud and like the early dew it goes away” (Hosea 6:4). Earlier the charge by Hosea was God’s people were “destroyed for lack of knowledge” and had “forgotten the law of your God” (Hosea 4:6). Faith and knowledge are inexplicably intertwined with one another as Paul writes in Romans 10:17 that “faith comes by hearing and hearing by the word of God.”

The downfall of God’s people can be attributed to their failure to instill in their hearts the strength of the words of God. Religion began to be a ritual with actions and procedures rather that the knowledge of God. Burnt offerings were giving in rote ceremony of duty without affection. Sacrifices presented in their worship had no feeling or desire for affection toward the Lord. Worship had been polluted by the faithless hearts drawn away by the deceptive enticements of idol worship.

How could the chosen people of God reject Him and turn to the debauchery of Baal? “I found Israel like grapes in the wilderness; I saw your fathers as the firstfruits on the fig tree in its first season. But they went to Baal Peor, and separated themselves to that shame; they became an abomination like the thing they loved” (Hosea 9:10). The path to rebellion is strewn with the failed convictions of men who do not have the resolute character to devote themselves fully to the will of God. They ran well but they did not continue. Because of the famine in the land for the word of the Lord the people’s faith became as passing as a morning mist. “Hear the word of the Lord, you children of Israel, for the Lord brings a charge against the inhabitants of the land: There is no truth or mercy or knowledge of God in the land” (Hosea 4:1).

Mercy and knowledge is what were needed in the land. Faith was vanquished upon the sacrifices and burnt offerings given to soothe a gilded conscience serving the Lord through actions rather than the heart. The lesson from Hosea is the same appeal for the nation of saints today. Sacrifice and burnt offerings are given without mercy. Within the body of Christ a famine exists in the hearts of disciples. Lack of knowledge has always destroyed faith. Where is the stand for truth as it was in the days of revival (Acts 3:19)? How are the lives of the Christian changed by the mercy of God? What has happened to a group of people that once were known as “people of the book?”

The church of God in America suffers from the delusions of modern Baal’s that vie for time, hearts and mind. As the people of old the holy nation of God in our century suffers from the faithlessness of knowledge lost. How easy Satan entraps the mind to be filled with everything but the knowledge of God. Worship becomes a common thing. Devotion to the cause of Christ goes by the wayside. Stories of conversion become fewer and fewer as less time is spent in saving souls. We go to church on Sunday biding our time until we meet again. Oh the drudgery of it all. When will the Lord take the gospel away from the self-satisfied American culture and give it to those less fortunate who truly need the pure milk of the word.

The clarion call of the New Testament is trumpeted in the ears of those who will devote their lives to work of Christ. This is not a passive call. We do not merely put on the armor of God – we go into battle. In the city of Thessalonica the early Christians were charged with turning the world upside down (Acts 17:6). Let every tongue proclaim in their community the saving message of a merciful Father. Be the instrument that will bring someone to Christ. Fill the gap as God’s people to defeat the armies of apathy that invade our land. Let not our faith be like the morning cloud or early dew but rather a lasting shower of His knowledge in our lives. Tune the heart to live for Christ each day in our speech, our manner of life, our moral rule, our recreation – our lives. “Let your light so shine before men, that they may see your good works and glorify your Father in heaven” (Matthew 5:16).