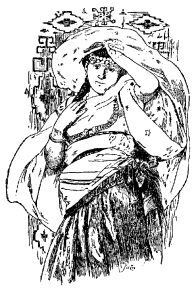 Little is known of the wife of Job but it is easy to see what a blessing it was to be married to a man who was “blameless and upright, one who feared God and turned away from evil” (Job 1:1). She lived in the opulence of the man who was the “greatest of all the people of the East” (Job 1:3). Her life was filled with the glory of God sharing the blessings of seven sons and three daughters. When Satan came against Job he touched the lives of the servants lost in the destruction and the heart of Mrs. Job. She suffered the loss of animals and servants and the lives of ten children along with her husband. The crushing blow of poverty was felt in her heart as she saw the work of her husband’s hands disappear and the possessions they enjoyed together taken away. The death of children born of her womb would have been more than anyone could endure. But Satan was not finished. He then came and inflicted a most horrible malady on Job personally. “So Satan went out from the presence of the Lord, and struck Job with painful boils from the sole of his foot to the crown of his head” (Job 2:7).

The wise man wrote, “An excellent wife is the crown of her husband” (Proverbs 12:4). Job’s condition was so awful that when his friends came to visit they could hardly recognize him. “And when they raised their eyes from afar, and did not recognize him, they lifted their voices and wept; and each one tore his robe and sprinkled dust on his head toward heaven” (Job 2:12). Job’s wife loved her husband and to see him in such a state would have been beyond the breaking point of endurance. Job 2:9 tells us she “said to him, ‘Do you still hold fast to your integrity? Curse God and die!’” (Job 2:9). In the Garden of Eden Satan came to the woman deceiving her and getting man to sin (Genesis 3; 1 Timothy 2:14); in the story of Job Satan attacks Job and causes the woman to sin.

It is a remarkable irony how we charge Job’s wife in her outburst of “curse God and die” and yet being honest with ourselves find it difficult to witness all that happened to the man you love and not have a reaction of horror and fear. That is what Satan does to us. Job endured the temptation and while he challenged the Lord (bringing the wrath of God upon him); the wife of Job also had her “demons” to battle. And she lost. And so do I – so often. The story of Job’s wife is not about Job 2:9 but Job 42:12-13 – “Now the Lord blessed the latter days of Job more than his beginning; for he had fourteen thousand sheep, six thousand camels, one thousand yoke of oxen, and one thousand female donkeys. He also had seven sons and three daughters.” Job’s wife came through the tragedy and was blessed like Job. Her faith remained in her trust for God. Her life was blessed with ten children and prosperity and a husband who was no longer afflicted. She did okay.

Examining the life of Mrs. Job may well reflect our own fear that we would find ourselves more often in her shoes rather than the place Job found himself. She told her husband to curse God and die and it could have been the heat of the moment in her sorrow and love for her husband or her heart could have turned against God. But the end of the story is the key to seeing her life in proper perspective. She remained faithful to God in her frailty. She made a mistake but the Lord forgave her and blessed her.

The story of Job is about God’s forgiveness to all of us who do not understand what is happening in the world and why things happen to us and “why me” and “this is not what I wanted life to be” – and the Lord gently telling us “’I will never leave you nor forsake you.’ So we may boldly say: ‘The lord is my helper; I will not fear. What can man do to me?’” (Hebrews 13:5-6). Job’s wife and three friends are true character studies of those of us who struggle with sin and often lose the battle. Paul struggled mightily with sin (Romans 7:13-25). The apostle Peter is known for his mistakes. But the grace and mercy of God is willing to forgive my sins and bless me with His kindness and long suffering. Thank you Lord for your abundant measure of forgiveness in my frailty. Thank you for examples like Job that walk among us today who show the character of righteous strength enduring unbelievable heartache and yet faithful to the Lord.