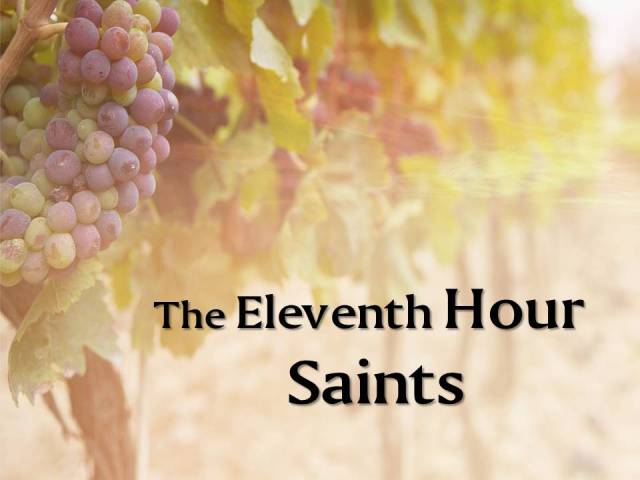 So when evening had come, the owner of the vineyard said to his steward, “Call the laborers and give them their wages, beginning with the last to the first.” And when those came who were hired about the eleventh hour, they each received a denarius. But when the first came, they supposed that they would receive more; and they likewise received each a denarius. And when they had received it, they complained against the landowner, saying, “These last men have worked only one hour, and you made them equal to us who have borne the burden and the heat of the day.” But he answered one of them and said, “Friend, I am doing you no wrong. Did you not agree with me for a denarius? Take what is yours and go your way. I wish to give to this last man the same as to you. Is it not lawful for me to do what I wish with my own things? Or is your eye evil because I am good?” So the last will be first, and the first last. For many are called, but few chosen. (Matthew 20:1-16)

The parables of Jesus taught the disciples eternal lessons that would continue to dominate the teaching of the church for generations to come. Taking stories from everyday life, Jesus helped His followers to understand the will of the Father, and these same stories are used today in preaching the gospel of Christ. After some hard discussions with the Pharisees about marriage and divorce, Jesus took His disciples aside and explained further the word of God. A rich man sought eternal life but was unwilling to pay the price required. This astonished the disciples as they watched the young ruler walk away but Jesus reaffirms the love of God by telling the parable of the workers in the vineyard. This was a common scene throughout the Bible lands where workers would gather in a place waiting for someone to hire them. Throughout the day, the landowner would hire men to work for him. The object of the lesson came at the conclusion.

As the story unfolds, Jesus describes what happens when the day’s work is done and the landowner tells his steward to pay the laborers. He instructs his steward to pay the workers who were hired last before paying those who were hired first. When those hired at five o’clock were paid, each received a denarius as agreed upon when they were hired. When those hired first came to get their pay, they assumed they would receive more than a denarius. To their surprise, they received the same amount as those hired near the evening.  When they saw what they received was the same as those hired in the evening, they protested to the landowner. It seemed unfair that while the first group had worked all day in the heat they should be paid more than those who came so late in the day. The landowner replied that it was according to his will how the servants would be paid and what he was doing was a good thing.

There are many lessons to take from this parable but one that stands out is the joy of knowing the power of salvation is not measured by the length of time a person serves the Lord. The illusion to the workers in the kingdom can be viewed as those who obey the gospel at different times of life. One man may become a Christian when he is twenty years of age and serve the Lord for fifty years. However, another man may not learn of the gospel until he is in his eighties. The first man served the Lord for fifty years and dies and the other man becomes a Christian in his eighties and dies soon after. God is not a respecter of persons to deny the latter man the same joys of eternal life as the first man. This point is driven home in an amazing story of a woman named Sharon.

There was a family of three sisters with the youngest of the siblings named Andrea. Sharon was the middle sister and was battling Stage-4 cancer for some time. Andrea was a faithful child of God and wanted very much to visit her sister who lived nearly two thousand miles away. Because of COVID-19, Andrea was unable to see her sister. Tragically, Andrea got sick and passed away suddenly. Andrea and her sisters talked often about God when they would call one another as they often did. After the death of Andrea, her husband and daughter traveled to see Sharon. That Sunday morning, Sharon was baptized into Christ for the remission of her sins. The rejoicing was overwhelming and hearts were lifted to the throne of God in joy. It was not an easy task for Sharon to be baptized. She was in the hospital battling Stage-4 cancer. They took her to the burn unit where they had large metal tubs. They filled one and used a Hoyer lift to pick her up and lower her into the tub.  Only her head was above water so it was easy to completely immerse her after her confession.  She had done pretty well all day, but after the baptism and upon returning to her room, she took an almost immediate turn for the worse.  No reason to continue to fight.  She was ready to meet her Lord.  Her last words before being placed in the tub were, “I don’t know why I waited so long.” Sharon died Monday morning called to be a saint of the Most High God. Joy found its way in the heart of sorrow.

The lesson of the parable and the story of Sharon is not to wait until the eleventh hour because many a man who thinks he can wait until the midnight hour to obey will die at 11:30. But there is joy in knowing that even someone who obeys the will of the Lord at 11:55 can enjoy the blessings of heaven as those who became a child of God early in life. What are you waiting for? No one knows when death will come. Today is the day of salvation. Repent, and let every one of you be baptized in the name of Jesus Christ for the remission of sins, and you shall receive the gift of the Holy Spirit. For the promise is to you and your children, and to all who are afar off, as many as the Lord our God will call. Be saved from this perverse generation – today! (Sharon’s story used by permission of the family. My thanks to Dave Shamblin for helping with the story).